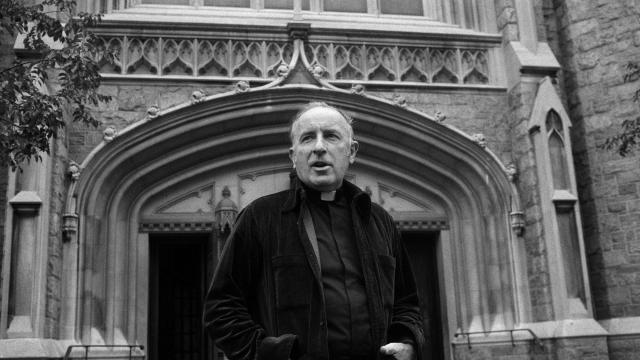 Monsignor Thomas P. Leonard, a dynamic priest whose Roman Catholic ministry embraced babies with the virus that causes AIDS and homeless New Yorkers, and who revived both the congregation and the glorious Byzantine church building of a struggling Upper West Side parish, died Oct. 18 in Manhattan. He was 90.

His family said he died after being injured in a fall.

“His only priority was to serve Our Lord by serving His people,” Cardinal Timothy Dolan, the archbishop of New York, said Wednesday in an email. “He was beloved by his parishioners, and by his brother priests, many of whom he mentored and guided.”

Leonard entered the priesthood just a few years before the Second Vatican Council relaxed the church’s magisterial strictures. He vividly remembered the day in 1962 when, under procedures to bring the clergy closer to their congregations, he celebrated Mass facing his parishioners for the first time.

That same year, he warned from the pulpit of St. Patrick’s Cathedral against “the capital sin of sloth.” He spent more than six decades practicing what he preached.

“He was one of those saints who had both his feet firmly planted on the ground and wore his collar with great pride and dignity, while being grievously wounded by the actions of the few who failed to do so,” Brother Brian Carty, president of De La Salle Academy, a private school in Manhattan for academically talented poor children, said in an email.

In 1983, Leonard was instrumental in the founding of Broadway Housing Communities, an advocate for, and nonprofit developer of, affordable apartments for single adults and families in West Harlem and Washington Heights, where he served as a pastor.

In 1988, as a pioneer in the archdiocese in supporting AIDS patients, he helped transform a vacant convent into the Incarnation Children’s Center, a residence in Washington Heights for babies who were HIV positive and had languished in hospital wards for months or even years.

At the same time, Cardinal John Joseph O’Connor, the archbishop of New York and Leonard’s boss, was drawing protests from gay rights groups and advocates for people with AIDS for refusing to allow Catholic schools to offer AIDS education that included instructions about condoms.

In the 1990s, as the energetic pastor of Holy Trinity Roman Catholic Church at 213 W. 82nd St., Leonard revitalized the congregation. He also oversaw the renovation of the 1912 church and its Guastavino dome, 66 feet in diameter, which he likened to “a miniature Hagia Sophia” — invoking the Byzantine cathedral of Constantinople on which the church is modeled — when it reverberated with the sound of a new organ that was installed on his watch.

Armed with the musicality, poetry, wit and grit of an Irish politician (among his other civic roles, he was chairman of the Washington Heights community board), Leonard was willing to risk his reputation on causes, like redemption, that others might consider unpopular.

In 1986, after Robert Chambers Jr., the “Preppy Killer,” was charged with murdering Jennifer Levin during what Chambers said was rough sex in Central Park, Leonard, who had taught Chambers at St. David’s elementary school, contacted his mother. She asked him to write a letter to the judge in her son’s case and to appear at the bail hearing.

He barely remembered Chambers from school, but agreed, he said at the time, “because someone had to do it and because he had a right to bail.” He visited Chambers, who eventually pleaded guilty to manslaughter and was sentenced to prison, while he was detained on Rikers Island, and he remained in contact with him as a condition of his pretrial release. In 1988, according to a legal deposition, Leonard warned the archdiocese against promoting the Rev. Edward Pipala, a Catholic-school teacher who a decade earlier had acknowledged a sexual encounter with a student. His stance contrasted with that of many in the church hierarchy who looked the other way as priests accused of abuse were shuffled from job to job.

In an interview in 2002, Leonard recalled telling one of his successors as director of priest personnel for the archdiocese, “I would not have made Ed Pipala a pastor.” Pipala, he added, should never have been allowed to work with children again.

Pipala was accused of molesting as many as 50 boys over the next 15 years. He was subsequently defrocked and imprisoned.

Leonard welcomed the infusion of laymen to be trained as permanent deacons, in part to help deal with a shortage of priests, and criticized what he described in 1997 as “an antiquated leadership” of the church.

“We have nobody with young legs,” he added. “And as the Babe said, the legs go first.”

Thomas Peter Leonard was born Feb. 18, 1928, in Manhattan. His father, Peter, was the chief cashier for the archdiocese’s Calvary and Allied Cemeteries. His mother, Mary (Gannon) Leonard, was a teacher. He was raised with his brother and sister in Morningside Heights.

He is survived by his brother, John.

After attending Regis High School in Manhattan, he enrolled in Fordham University. He interrupted his studies in 1946 to serve in the Navy for two years and then returned to graduate.

After attending St. Joseph’s Seminary in Yonkers, New York, he was ordained in 1956 and joined his first parish, Immaculate Conception, in Irvington, New York, in Westchester County.

He was director of priest personnel for the archdiocese from 1973 to 1977 under O’Connor. When he was pastor from 1977 to 1990 at the Church of the Incarnation in Washington Heights — a parish with a large population of Spanish speakers — he went to Puerto Rico to learn Spanish.

In 1990, he was assigned to Holy Trinity Parish on the Upper West Side, where he remained until 2014. After he retired, he served at St. Stephen’s of Hungary on the Upper East Side, and then at St. Malachy’s, known as the Actors’ Chapel, in Midtown. In 1998, at Holy Trinity, Leonard delivered the homily during the funeral Mass for Paul O’Dwyer, the dogged, progressive immigrant who had been president of the City Council and was the brother of a former mayor.

Describing O’Dwyer’s style of “confrontation, with wit and sagacity” — he could have been talking about himself — Leonard recalled a conversation he had heard two friends having in the rectory the day before. They were reading O’Dwyer’s obituary, which mentioned his fierce commitment to lost causes.