Mom shares drowning scare with 5 On Your Side so other parents know: It can happen quickly, quietly

After her 5-year-old son nearly drowned – while surrounded by adults – Maribeth Leeson wrote on Facebook about the fear of seeing his limp, gray, lifeless body being pulled from the pool. She shared the story so that other parents know what to watch for when children are swimming or playing in the water.

Leeson was aware her son had gotten in the water.

But Adam reached the edge of the shallow end and – suddenly and quietly – slipped on that ledge where the water turns deep.

"No one heard him because all he did was slide under the water and then couldn't get back up," Leeson said.

Those who did see him underwater thought he was swimming, she said.

"They thought he was holding his breath, going up and down on purpose to the bottom of the pool and back up, when in reality he just couldn't get up enough to get his mouth above water to get a breath of air," she said.

Leeson remembers the details as though it happened in slow motion: Screaming, Adam pulled from the pool, her friend relentlessly giving CPR.

But then Adam cried, coughed and started breathing.

"If she didn't know CPR and we'd had to wait on an EMT to come, it would have been too late. He wouldn't have been able to be revived," she said.

After just three days in the hospital, Adam was back home and back to his smiling self with no lingering effects. 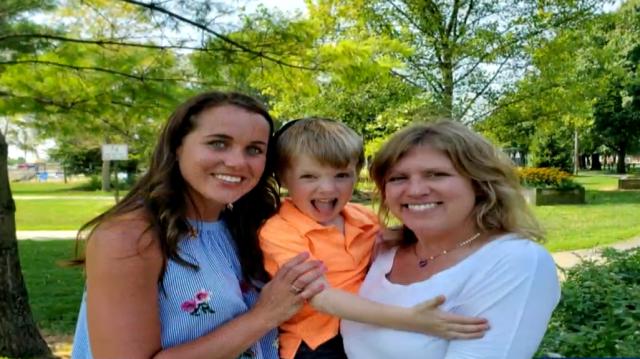 Leeson has made it her mission to get the word out about how silent and sudden drowning can be, that it doesn't usually involve splashing and calls for help.

"You think of drowning as a child getting out of your house and falling into a pool," she said. "And that happens. Tragically, that happens all of the time. But you don't think about it happening when you're 5 feet away from them and in a pool with other people.

"To think how fast that happened and how quietly, nobody knew that it happened until I said, 'Where's Adam?'"

In the hospital, Adam told her he tried to yell "Mommy!" but kept going under.

Leeson understands that Adam's ordeal was 100% preventable. She blames only herself. Yet knows this is a message, a reminder, many parents need to hear.

"Don't let any of your kids get in until you are ready to get in as well, because this happened in five minutes," she said.

And she reiterated the importance of knowing CPR.