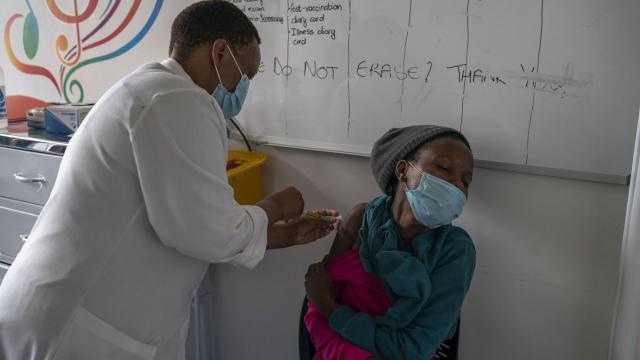 As the coronavirus assumes contagious new forms around the world, two drugmakers reported on Monday that their vaccines, while still effective, offer less protection against one variant and began revising plans to turn back an evolving pathogen that has killed more than 2 million people.

The news from Moderna and Pfizer-BioNTech underscored a realization by scientists that the virus is changing more quickly than once thought, and may well continue to develop in ways that help it elude the vaccines being deployed worldwide.

The announcements arrived even as President Joe Biden banned travel to the United States from South Africa beginning Saturday, in hopes of stanching the spread of one variant. And Merck, a leading drug company, on Monday abandoned two experimental coronavirus vaccines altogether, saying they did not produce a strong enough immune response against the original version of the virus.

Moderna and Pfizer-BioNTech both said their vaccines were effective against new variants of the coronavirus discovered in Britain and South Africa. But they are slightly less protective against the variant in South Africa, which may be more adept at dodging antibodies in the bloodstream.

The vaccines are the only ones authorized for emergency use in the United States.

As a precaution, Moderna has begun developing a new form of its vaccine that could be used as a booster shot against the variant in South Africa. “We’re doing it today to be ahead of the curve, should we need to,” Dr. Tal Zaks, Moderna’s chief medical officer, said in an interview. “I think of it as an insurance policy.”

Moderna said it also planned to begin testing whether giving patients a third shot of its original vaccine as a booster could help fend off newly emerging forms of the virus.

Dr. Ugur Sahin, the chief executive of BioNTech, said in an interview Monday that his company was talking to regulators around the world about what types of clinical trials and safety reviews would be required to authorize a new version of the Pfizer-BioNTech vaccine that would be better able to head off the variant in South Africa.

Studies showing decreased levels of antibodies against a new variant do not mean a vaccine is proportionately less effective, Sahin said.

BioNTech could develop a newly adjusted vaccine against the variants in about six weeks, he said. The Food and Drug Administration has not commented on what its policy will be for authorizing vaccines that have been updated to work better against new variants.

But some scientists said that the adjusted vaccines should not have to go through the same level of scrutiny, including extensive clinical trials, that the original versions did. The influenza vaccine is updated each year to account for new strains without an extensive approval process.

“The whole point of this is a rapid response to an emerging situation,” said John Moore, a virus expert at Weill Cornell Medicine in New York.

Sahin said a similar booster shot eventually may be necessary to stop COVID-19. The vaccine’s reduced efficacy may also mean that more people will need to get the shots before the population achieves herd immunity.

Scientists had predicted that the coronavirus would evolve and might acquire new mutations that would thwart vaccines, but few researchers expected it to happen so soon. Part of the problem is the sheer ubiquity of the virus.

There have been nearly 100 million cases worldwide since the pandemic began, and each new infection gives the coronavirus more chances to mutate. Its uncontrolled spread has fueled the development of new forms that challenge human hosts in various ways.

“The more people infected, the more likely that we will see new variants,” said Dr. Michel Nussenzweig, an immunologist at Rockefeller University in New York. “If we give the virus a chance to do its worst, it will.” Several variants have emerged with mutations that worry scientists. A form first detected in Britain is up to 50% more contagious than the virus identified in China a year ago, and researchers have begun to suspect that it may also be slightly more deadly.

Researchers in South Africa identified another variant after doctors there discovered a jump in COVID-19 cases in October. They alerted the World Health Organization in early December that the variant seemed to have mutations that might make the virus less susceptible to vaccines.

A variant found in Brazil has many of the mutations seen in the South African form, but genetic evidence suggests that the two variants evolved independently. Preliminary studies in the laboratory had hinted that those viruses may have some degree of resistance to the immunity that people develop after recovering from the infection or being inoculated with the Moderna or Pfizer-BioNTech vaccines.

The variant identified in Britain has been found in at least 20 states in the United States. The version found in South Africa has not been reported in this country, but on Monday health officials in Minnesota announced that they had documented the first case of infection with the Brazilian variant.

It is far from certain that these are the only worrying variants out there. Few countries, including the United States, have invested in the kind of genetic surveillance needed to detect emerging variants. Britain leads the world in these efforts, sequencing of about 10% of its virus samples.

The United States has analyzed less than 1% of its samples; officials at the Centers for Disease Control and Prevention said this month that they expect to swiftly ramp up those efforts.

Researchers at Moderna examined blood samples from eight people who had received two doses of the vaccine, and two monkeys that had been immunized. Neutralizing antibodies — the type that can disable the virus — were just as effective against the variant identified in Britain as they were against the original form of the virus.

But with the variant circulating in South Africa, there was a sixfold reduction in the antibodies’ effectiveness. Even so, the company said, those antibodies “remain above levels that are expected to be protective.”

Zaks said that the new version of the Moderna vaccine, aimed at the South African variant, could be used if needed as a booster one year after people received the original vaccine.

The need for such a booster may be determined by blood tests to measure antibody levels or by watching the population of vaccinated people to see if they begin falling ill from the new variant.

“We don’t yet have data on the Brazilian variant,” Zaks said. “Our expectation is that if anything it should be close to the South African one. That’s the one with the most overlap.” New forms of the virus will continue to emerge, he said, “and we’ll continue to evaluate them.”

Noting that Moderna took 42 days to produce the original vaccine, he said the company could make a new one “hopefully a little faster this time, but not much.”

One reason the current vaccine remains effective is a “cushion effect,” meaning it provokes such a powerful immune response that it will remain highly protective even with some drop in antibody strength, Dr. Anthony Fauci, the government’s leading expert on infectious diseases, and Biden’s adviser on the coronavirus, said at a news briefing Friday.

Experts also cautioned against assuming that a decrease in neutralizing ability meant the vaccines were powerless against the new variants. Neutralizing antibodies are just one component of the body’s immune defense, noted Akiko Iwasaki, an immunologist at Yale University. “In real life, there’s also T cells and memory B cells and non-neutralizing antibodies and all these other effectors that are going to be induced by the vaccine,” Iwasaki said. Neutralizing power is “very important, but it’s not the only thing that’s going to protect someone.”

So long as the authorized vaccines continue to work against the variants, the challenge will be to inoculate as many people as possible and to prevent the coronavirus from evolving into more impervious forms. “That for me is still the highest priority,” said Sahin, of BioNTech.

Then, he said, perhaps six to nine months later, people could be given a boost that was customized for the variant.

The pace of the vaccine rollout in the United States, at least, may be picking up. Fauci predicted Sunday that 2 million inoculations daily might soon be possible.

But there are many countries where no one has been immunized. With richer countries buying up doses early, some populations may have to wait till 2022 at the earliest to gain access to any vaccines.

In theory, new variants emerging in other parts of the world could render the virus resistant to the vaccines, Nussenzweig said, and they would inevitably spread. It is therefore in everyone’s interest to immunize the world as quickly as possible, he added: “We can’t hermetically seal ourselves from the rest of the world.”

Hoping to contain the new variants, the administration has upheld bans on travel by noncitizens into the United States from Europe and Brazil. Biden will ban travel by noncitizens from South Africa starting Saturday. But that variant may already be in the United States, researchers said. The mRNA technology used in both the Pfizer-BioNTech and Moderna vaccines allows them to be created and reformulated much faster than vaccines made with more traditional methods.

“This is the beauty of the mRNA vaccines — they’re very versatile,” Iwasaki said. But a new formulation may not even be necessary, she added. A third dose of the current vaccine may be enough to boost levels of antibodies.

Zaks said that discussions with regulators about what would be required to bring a new version of the vaccine to the public were just starting.