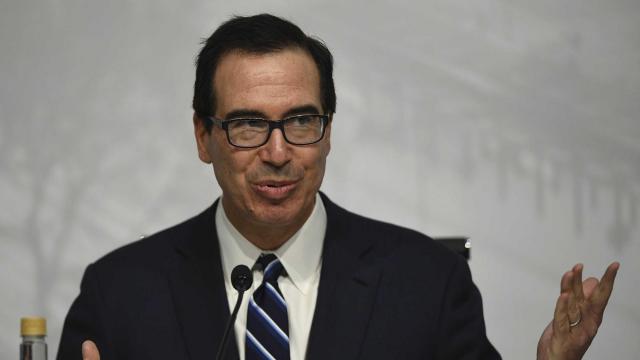 (CNN) — President Donald Trump started Monday by congratulating himself for making direct progress on trade with his Chinese counterpart Xi Jinping -- but now the work of hammering out a deal will fall to top American trade envoy Robert Lighthizer.

Lighthizer is a China hardliner who has been pressing for more tariffs to build leverage over Beijing, while Mnuchin, a former Wall Street investment banker, who has been more attuned to the market's jitters, has been trying to encourage a settlement.

On a call with reporters, Kudlow said Mnuchin would continue to be "very involved" in negotiations, including on currency issues, while Lighthizer would be responsible for ensuring that China keeps its commitments and sticks to agreed time frames within the 90-day window set by Trump.

"I don't think it's either or," Kudlow said, referring to Mnuchin and Lighthizer, who he described as the "best trade negotiator in the business." He added: "Mr. Lighthizer will be as vigilant as anybody in the business in monitoring this."

Trump has fostered rivalries among his closest advisers on China, pitting former Wall Streeters such as Mnuchin and Kudlow against China hawks Lighthizer and Navarro.

In an early morning interview on National Public Radio, Navarro -- who has clashed with his White House colleagues on how the US should proceed in its negotiations with China -- first said that Lighthizer would be overseeing negotiations.

Shortly after Navarro's interview, Mnuchin appeared on CNBC, where he made clear there's only one person leading trade negotiations with China, and that's the President.

"It's clear that President Trump is going to be the one who leads the negotiations, and the team will be an inclusive team," said Mnuchin during an interview on CNBC's "Squawk Box."

Mnuchin's message was echoed by the President himself, who boasted on Twitter about his relationship with Xi while his Treasury secretary was still speaking on television.

"He and I are the only two people that can bring about massive and very positive change, on trade and far beyond, between our two great Nations. A solution for North Korea is a great thing for China and ALL!" Trump tweeted.

Over the weekend, the leaders of the world's largest trading partners struck a temporary truce, with Trump agreeing to maintain the 10% tariffs on $200 billion worth of Chinese goods, and not raise them to 25% "at this time," ahead of a January 1 deadline.

In exchange, China agreed it was willing to purchase a "very substantial" amount of agriculture, energy and other goods from the United States to help reduce the trade imbalance -- an achievement Trump also touted on Twitter, saying "Farmers, I LOVE YOU!"

It will now be up to US and Chinese negotiators to craft a deal with "real agreement" on "specific action items and deliverables and time frames," said Mnuchin in the interview.

Mnuchin reiterated that the Trump administration was committed to reaching a resolution.

"This is not going to be something where there is soft commitments that get kicked down the road," Mnuchin said on CNBC. He described the President's discussion with Xi as "very, very specific."

Mnuchin told reporters at the White House that both leaders -- Trump and Xi -- have extended invitations to their respective countries, but no specific time or date has been set for the next round of talks.

"My expectation is that with all these issues, they will be meeting in the near future," he said.

Mnuchin added that there would be changes to the US agricultural sector "right away," a signal to US soybean farmers who have been the first to feel pain from Chinese retaliation.

The treasury secretary said on CNBC that the Chinese government had made $1.2 trillion in additional commitments to buy US goods, including on agriculture.

He also said there would be an "immediate focus on reducing auto tariffs," after the President announced China would be willing to "reduce and remove" levies on US automakers from 40%.

Trump didn't specify when the change would happen or what the new tariff level would be. Kudlow said a commitment was made by the Chinese government but that no agreement has been reached on what the new tariffs would be. He said he expects auto tariffs to drop to zero.

"This is an area," said Kudlow, "where that word 'immediately' comes in. Let's get rolling folks. Today is Monday. Dinner was Saturday. Feel free to take important steps to give more credibility."

Kudlow told reporters that Chinese Vice Premier Liu He, a key figure in the trade discussions, conveyed at the dinner that Beijing was willing to move ahead to change tariffs and non-tariff barriers "immediately" -- but did not specify particular sectors.

Ahead of this weekend's meeting, the President had directed his top trade negotiator to "examine all tools" available to address significantly higher tariffs imposed by China on US automakers.

The secretary said there were several meetings in advance of the leaders' meeting in Buenos Aires and no decisions were made until the two presidents met over a steak dinner. Mnuchin met with He twice along with Kudlow and Navarro ahead of the dinner, according to Kudlow.

Mnuchin signaled there was a big difference in tone on Saturday with a "very genuine offer" by Xi to Trump. The President described the meeting as "extraordinary" and as a "BIG leap forward" in US-China relations in another tweet earlier Monday morning.

The treasury secretary also added pressure on Chinese negotiators to keep their promises to the American President, noting that Trump has ample "tools in the toolbox" to escalate tariffs on Beijing if talks don't proceed as planned.

"I'm taking President Xi at his word on his commitment to President Trump, but they have to deliver on this," Mnuchin told reporters. "The President has been clear he expects to move forward, but he has reserved the ability to do additional tariffs if they're not successful."

The secretary offered some buffer for negotiators on what could be achievable over the next 90 days, noting there could be a "phased-in approach."