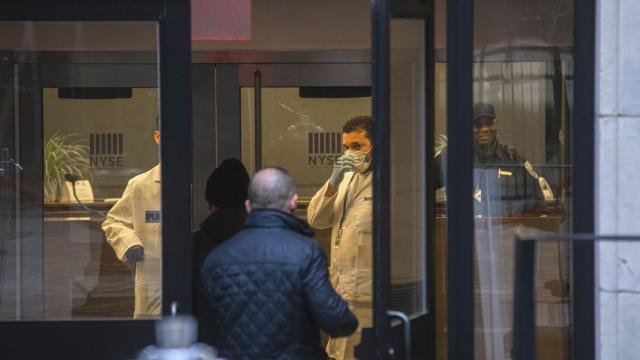 WASHINGTON — The White House and lawmakers scrambled on Thursday to flesh out details of a $1 trillion economic stabilization plan to help workers and businesses weather a potentially deep recession, negotiating over the size and scope of direct payments to millions of people and aid for companies facing devastation in the coronavirus pandemic.

Senate Republicans, racing to put their imprint on the crisis response, unveiled a package that would provide hundreds of billions of dollars in loans to big corporations and small businesses, large corporate tax cuts and checks of up to $1,200 for taxpayers. The plan would also place limits on a paid-leave program enacted this week to respond to the crisis.

But the 247-page measure, the product of a feverish round of negotiations among Republicans, was all but certain to face opposition from Democrats who have pressed for more generous paid-leave benefits and targeting help to workers and families rather than large corporations.

The details emerged as Washington grappled with the dimensions of an extraordinary government rescue effort that is likely to last for many months. At the White House, President Donald Trump said he would be open to having the government take equity stakes in companies that require federal help, a move that would be unpopular with shareholders and would give the government more oversight over businesses.

But he also injected new uncertainty into the government’s response, suggesting it was not his responsibility to meet the needs of health care workers on the front lines of combating the disease. A day after he said he would use the Defense Production Act — a Korean War-era law that allows presidents to force American industry to ramp up production of critical equipment and supplies — Trump told reporters that he would rather rely on states to deliver equipment to health care workers.

“The federal government’s not supposed to be out there buying vast amounts of items and then shipping,” Trump said. “You know, we’re not a shipping clerk,” he said, adding that governors “are supposed to be doing it.”

On Capitol Hill, Republicans presented a bill that would offer bridge loans of up to $10 million each to small businesses, extend hundreds of billions of dollars in loans to large corporations in distressed industries and send checks as large as $1,200 per adult to individuals earning less than $99,000 per year. The payments would phase in for earners up to $75,000 — meaning lower earners would get smaller checks — and then phase out again at $99,000. Those who did not earn enough to pay income tax would receive much less: $600.

The proposal is different from one pitched on Thursday by Steven Mnuchin, the Treasury secretary, who said the administration wanted to send two waves of $1,000 checks to every American, one in April and one in May should the crisis persist.

The Senate bill also includes a raft of temporary changes to the tax code that would reduce the tax liability of large corporations, many of them overriding provisions in the 2017 tax overhaul that were meant to raise revenue to offset corporate rate cuts.

It would place new limits on a paid-leave program that Congress passed and Trump signed into law this week, shielding small business owners from any costs of paid leave for workers affected by the virus — and limiting how much pay those workers could receive if they are forced to stay home.

A preliminary estimate by the Tax Foundation in Washington shows that the bill would cost at least $1 trillion. The small-business loans alone would be $300 billion, according to documents circulated on Thursday by Senate Republicans.

But little more than an hour after its release, the top House and Senate Democrats indicated that the legislation did not meet their standards.

“We are beginning to review Sen. McConnell’s proposal, and on first reading, it is not at all pro-worker and instead puts corporations way ahead of workers,” Speaker Nancy Pelosi and Sen. Chuck Schumer of New York, the minority leader, said in a joint statement.

Calling the legislation a “significant next step,” McConnell vowed that the Senate would not leave until the rescue package had been approved, and said there could be a possible fourth relief package to follow as Congress seeks to address an extraordinary series of events.

But several of the Republican proposals are likely to be nonstarters for Democrats in both chambers, whose support is needed in order for the package to become law.

“Hopefully each side will give,” Schumer said, speaking minutes after McConnell introduced the proposal. “We’ll come up with a good plan, we’ll send it to the president, and we will help to begin the long path to eradicate this awful virus.”

House Democrats, scattered across the country during an indefinite recess, have also been exchanging their own proposals over conference calls from their districts. Pelosi, who has spoken repeatedly with Mnuchin in recent days, has said her committee leaders were discussing the possibility of expanding unemployment insurance eligibility, refundable tax credits and funds for small businesses to ensure that workers continue to be paid.

One of the sticking points for members of both parties was the scope of the direct payment program, with some Republican senators pushing to strengthen unemployment insurance and loans for small businesses.

“Direct payments make sense when the economy is beginning to restart — it makes no sense now because it’s just money,” Sen. Lindsey Graham, R-S.C., told reporters. “What I want is income, not one check. I want you to get a check you can count on every week, not one week.”

Others said it should be structured so that the lowest earners got the most help — not the other way around.

“Relief to families in this emergency shouldn’t be regressive,” Sen. Josh Hawley, R-Mo., said in a tweet. “Lower-income families shouldn’t be penalized.” While there is general agreement about the need to speed economic help to millions of Americans, House Democrats are also debating the contours of their own proposal, including how to target the direct payments and the level of government intervention. During a private conference call on Thursday, they debated where to set the income cap on individuals who could receive government checks, according to three people familiar with the discussion who insisted on anonymity to describe the private call.

Rep. Richard Neal of Massachusetts, the Democratic chairman of the Ways and Means Committee, which would have some jurisdiction over the issue, suggested capping the direct payments to individuals with incomes between $50,000 and $75,000, according to two people familiar with the discussion. Other lawmakers advocated raising the limit to individual incomes of $130,000, while others suggested universal payments.

And some Democrats believe the government should intervene more directly and take on payroll or other expenses for small businesses, arguing that could be a more targeted and effective way to keep them afloat and people employed.

Pelosi has said publicly and privately that she will consider including provisions that would expand eligibility for unemployment insurance, as well as using refundable tax credits to expedite funds directly toward people affected by the outbreak.

It is also likely that the House will address a request from the administration to distribute emergency aid to agencies on the front lines. Rep. Nita Lowey of New York, the Democratic chairwoman of the House Appropriations Committee, told her colleagues on Thursday that her committee is expected to allocate between $100 billion and $150 billion, more than doubling the request, according to a person familiar with the remarks, and include it in the emerging package. “Supplemental appropriations are an essential part of a whole-of-government strategy to address this pandemic, and it is irresponsible for Senate Republican leadership to omit these needed resources from its proposal,” said Evan Hollander, a spokesman for the House committee.

Earlier this month, Congress approved a first, $8.3 billion round of emergency money for federal health agencies, and this week it finalized a second measure — whose cost has yet to be tallied — to provide paid leave, jobless aid and food and health care assistance, as well as free coronavirus testing. Trump has signed both.

Time is of the essence in the talks. The news Wednesday night that two House lawmakers had tested positive for coronavirus after voting early Saturday has added pressure for senators to cut a swift deal on the package and depart Washington indefinitely.

The fiscal relief package unveiled Thursday is only one part of the administration’s plan, which some analysts now anticipate topping $1.5 trillion before the negotiations are completed. Mnuchin said the Treasury Department and the Federal Reserve were working in lock step and were prepared to do whatever was possible to provide liquidity to American companies so they could weather the crisis without laying off workers. The Federal Reserve said late Wednesday night that it would offer emergency loans to money market mutual funds, its latest in a series of steps to keep the financial system functioning and prop up the economy.

“What we’re really focused on is providing liquidity to American businesses and American workers,” Mnuchin said on the Fox Business Network on Thursday. “This is an unprecedented situation.” He said he had advised the president to purchase oil, which is at historically low prices, and fill up America’s strategic reserve.

Economists are bracing for a deep recession. Analysts at J.P. Morgan said this week that the U.S. economy could contract by 14% in the second quarter of this year.

The Treasury Department has not released updated economic projections, but Mnuchin said that he expected the beginnings of growth again in the third quarter and a “gigantic” rebound in the final three months of the year.

Economic data is beginning to trickle out, offering a grim preview of the damage that lies ahead. Official figures released on Thursday showed claims for unemployment insurance reaching their highest level in more than two years.

“The coronavirus outbreak is already starting to have a significant impact on the economy,” said Andrew Hunter, a senior U.S. economist at Capital Economics. “Timelier reports of state-level data point to an unprecedented surge in layoffs over the next couple of weeks.”

The Treasury secretary indicated that he and the Federal Reserve chair, Jerome Powell, would use all the tools at their disposal to allow that workers and businesses to subsist for the next few months.