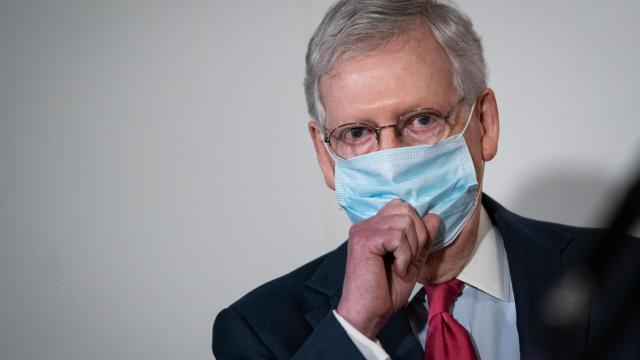 EDITOR'S NOTE: Gail Collins is a New York Times columnist, a former member of the editorial board and was the first woman to serve as the Times editorial page editor.

Well, the good news is that we’re probably not going to default on the national debt before Thanksgiving.

Really did look as if things might be going the other way. But at nearly the last minute, Mitch McConnell decided he’d graciously allow the Senate Democrats to pass an extremely modest, very short-term debt limit extension.

What brought McConnell around? Do you think he’s been reminding himself, while brushing his teeth at night, of the last time his party worked with Democrats on the debt ceiling and got cooperation?

Is it possible that while donning his pajamas, he recalled that a vast, vast amount of the debt we’re worried about — nearly $8 trillion worth — was run up under the presidency of one Donald Trump?

This deficit fight is far from over. The Republicans, following McConnell’s lead, are going to keep pretending that borrowing the money to pay the government’s bills is a new phenomenon invented to support Joe Biden’s agenda.

“There is no chance, no chance the Republican conference will go out of our way to help Democrats conserve their time and energy, so they can resume ramming through partisan socialism as fast as possible,” McConnell had announced.

Coming soon: Mitch attempts to cancel Democratic parking passes under the theory that time spent scouring for a garage is time not available to promote socialism on the Senate floor.

Everybody knows McConnell is one of the biggest players in Washington, but it was sort of shocking when he suddenly started hollering about the national debt. Are all the Republicans really going to follow his lead and pretend they don’t care about ruining the nation’s credit rating, just to torture the Democrats?

“I mean, I’m not going to be a complete asshole about it. But I’m going to make them take some tough votes,” said Lindsey Graham, one of the Senate Republican leaders on budget matters.

Leaving it to you to decide how to comment on that one.

McConnell’s obsession is Republican victories next year that will turn him back into Senate majority leader. In a perfect world his members would be hopping up and down, offering amendments that would force the Democrats to take embarrassing votes on anything from tax hikes to the price Hunter Biden’s paintings fetch.

And, of course, shifting the whole blame for the national debt in one direction. “Let’s be clear: With a Democratic President, a Democratic House, and a Democratic Senate, Democrats have every tool they need to raise the debt limit. It is their sole responsibility,” McConnell tweeted.

I’m so sorry about this — here you are, a concerned citizen who’s just started planning COVID-conscious holiday parties. And all of a sudden you’ve got to wrestle with a complicated financial story that requires a great deal of time contemplating Mitch McConnell.

And that’s almost never much fun. “Some folks still don’t think I spend enough time with Congress,” mused Barack Obama when he was president. “Why don’t you get a drink with Mitch McConnell, they ask. Really?”

McConnell does inspire a lot of colorful commentary about his colorlessness. One columnist suggested McConnell “normally displays the emotional range of a coat rack.” In a Times profile, Charles Homans wrote that the Republican leader “used this blankness” to great advantage in accomplishing his goals, just “like a spy or a pinto bean.”

God knows he’s never been beloved in his home state. McConnell won an easy reelection victory last year, and just a few months later, a statewide survey found 53% of his fellow Kentuckians said they disapproved of his performance. It does suggest that like so very many people in the senator’s life, his constituents are mainly interested in what they can get out of him.

One of the deeply ironic aspects of McConnell’s sudden demand that the Democrats be forced to raise the debt limit with as many difficult votes as possible, is his own enormous affection for accomplishing his goals in the equivalent of a legislative closet. Remember when he killed so many of Obama’s judicial nominations? Didn’t even hold hearings on them.

Paying no attention whatsoever to Obama’s nomination of Merrick Garland to the Supreme Court was, McConnell said later, “the most consequential” accomplishment of his career. Clearly a guy who wants to be remembered for inaction was going to have a lot of fun not helping the Democrats keep the economy from collapsing.

So that’s the Mitch who spent last week creating a crisis over raising the national debt limit and then moved on to be the parliamentary peace broker.

Who, in his spare time, has been evolving into one of Donald Trump’s favorite enemies. Trump, who referred to the minority leader as a “dumb son of a bitch,” is still outraged that Mitch recognized Biden as the president-elect. I don’t want this to win you over to McConnell’s side of things, however. Truly, if we had to give sympathy to everyone who Trump treats poorly, we’d have to be feeling sorry for a really big section of the populace. This article originally appeared in The New York Times.