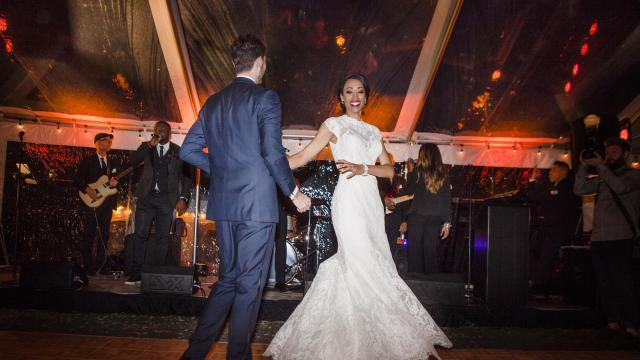 Dottie Cannon had a free lifetime membership to Match.com after agreeing to be featured in a company commercial in 2012. Two years and 70 dates later, she was still searching.

“Nothing really horrible ever happened on those 70 dates,” said Cannon, who was crowned Miss Minnesota in 2006, although she was starting to sense why a lifetime membership might be necessary. “Some guys were just sad. Some had bad manners.”

Cannon wound up with the Miss Congeniality sash that year in the Miss USA pageant. (The title went to Tara Conner of Kentucky.) In 2011, six years after earning a degree in marketing from the University of St. Thomas in St. Paul, Cannon moved to Manhattan to look for marketing work, retiring her pageant dresses.

But her Midwestern pluck, which had clearly won over her pageant peers, would years later win over a young Polish immigrant named Konrad Bieniek.

Cannon, 35, and Bieniek, 36, met in 2014 on Match.com. He had just signed up for a monthlong trial. By the time his profile caught Cannon’s eye, she had already been on her 70 Match dates. For Bieniek, who had moved from Queens to a Manhattan apartment in 2011, Cannon was Match date No. 2.

When they met for a drink at the Ace Hotel in the Flatiron district in April, she sensed he was different, although the meeting was far from perfect.

“Most of our conversation centered around the fact that he knew someone from Minnesota who worked at Target,” said Cannon, whose own résumé included a stint at Target headquarters in Minneapolis as a community relations specialist.

“I went to dinner with friends later, and they asked how the date went,” she said. “I was like, it went fine, but to be honest it felt like he was more interested in talking about his friend than getting to know me.”

Bieniek and his family relocated to Brooklyn from Kozienice, Poland, in 1991 when he was 8 years old. For him and his relatives, assimilation had been challenging: “People from my background can be a little blunt and hardened,” he said.

She didn’t rule out a second date. But Bieniek, a web user experience designer with a degree in economics from the University of Connecticut, said she might as well have. “She cut out early and said she was going to be busy the next few weeks because her birthday was coming up and her parents were coming to visit,” he said.

Still, he couldn’t get her off his mind. “She was very pretty, which I already knew from seeing her picture, but she was also taller than I thought,” said Bieniek, who at 6-foot-3, is only 3 inches taller.

He also found her “very poised and professional-seeming,” and “so positive and happy.”

Cannon, who is the director of human resources at Calvin Klein, admits to an abundance of extroversion. “I’m really sociable. I’ll strike up a conversation with somebody on the subway if they’re wearing an interesting T-shirt or baseball cap.” For Bieniek, that kind of friendliness was thrilling, if entirely foreign.

The Bieniek family — Konrad and his older sister, Monika, plus their parents, Ewa and Roman — arrived in Greenpoint, Brooklyn from Kozienice on July 4, 1991. They moved into a studio apartment rented by Bieniek’s paternal grandmother, who had arrived years earlier to work as a cleaner and caretaker. The family watched fireworks on the East River their first night in America. Roman Bieniek, a power plant worker in Poland, had the family’s life savings, $4,000, tucked in his pocket. Bieniek remembers sitting on his father’s shoulders as the night sky lit up. “We were all thinking, if he gets pick-pocketed, that’s it,” he said.

Within months, a landlord ordered the new arrivals to leave the overcrowded apartment. Bieniek’s parents, near penniless, were on the verge of packing to return to Poland when news came that Roman, one of 44 candidates for a position as superintendent of the Polish Slavic Center in Greenpoint, had gotten the job. But Bieniek’s hardscrabble childhood left its mark.

“The people who came here from Poland when my parents came were from harder times and harder situations,” he said. “That shaped their outlook.” he said.

When he started dating, his mother had hoped he would stick with local Polish girls. But, he said, “I wanted something different, someone with a different mentality.”

Cannon fit that profile. Growing up in Eagan, Minnesota, she was cocooned in sweetness and trust. “I had a very happy childhood, running through sprinklers and riding to friends’ houses on my banana-seat bike,” she said. Her parents, Melodee and Harry Cannon, still live in the house they bought in 1981, where Dottie Cannon and her younger brother, Samuel, were raised.

When Bieniek called Cannon for a second date in April 2014, they met for tea at the now-closed Coffee Bean and Tea Leaf in the Meatpacking District, and the conversation shifted to their wildly different backgrounds. Bieniek walked Cannon back to her SoHo apartment, but they weren’t done talking when they reached her door.

Within weeks, they closed their Match accounts. Within months, they were planning a vacation to Italy; both are passionate travelers. In August 2016, Cannon moved into Bieniek’s Murray Hill apartment, where they still live with their rescue dog, Hugo.

But if committing to each other was easy, ironing out how they wanted the future to look was less so. Since 2015, when she took a volunteer trip to Lesotho, Africa, with her church group, Cannon has wanted to adopt a child from that country. Bieniek is not so sure.

“We had a difficult conversation about it — I think it could have concluded our relationship,” Cannon said.

For her, part of the appeal of adopting a child from Africa is cultural. “Konrad is Polish; he knows his roots,” she explained. “I’m half-black. Living in Minnesota, I got my white side down pat. I needed exposure to my black side.”

The volunteer trip, during which she spent her days at an orphanage, opened a well of longing. “I have so much reverence and appreciation for that culture,” she said.

The couple said they are delaying any decisions about adoption. “Where I come from, people don’t really think that way about helping someone they don’t know,” Bieniek said. “They’re more focused on family and close community. Because when you’re struggling it’s harder to think about external things.”

But since meeting Cannon, he said, “I’ve grown. I’ve changed my opinion on a lot of things.” Among the qualities he loves best about Cannon is her openness. At his parents’ Brooklyn apartment, for example, she embraces traditional Polish Christmas Eve dinners, leaving her beloved Minnesota traditions aside.

“It’s a little hard in that setting, because there’s also a language barrier,” she said. But she appreciates the Bienieks’ efforts to make her feel at home. Last Christmas Eve, for example, the family added a ham to the menu, which usually includes pierogi, or dumplings and braised sauerkraut. “I ate the whole thing,” Cannon said.

Her ease among strangers was on display in January 2017, when the couple vacationed in Hawaii.

“We were walking down a sidewalk, and a man fell into the street,” Bieniek said. “Dottie was the first person to run across and get him up and tell somebody to call 911. She just took over. I was so proud and impressed. I aspire to be someone like that.”

He had already expressed his aspiration to be the husband of someone like that to Cannon’s father. During a visit a few months before to Minnesota, Bieniek took Harry Cannon aside and told him his plan to propose in Hawaii. Cannon owns a jewelry appraisal company, and in addition to his blessing, which he readily gave, Bieniek wanted his advice about a ring.

“The average diamond these days is half a carat,” Cannon said, suggesting a similar size to Bieniek. “But Konrad came out with both guns blazing and bought a 2-carat diamond that has some length and width to it. I was impressed.”

On Jan. 29, 2017, at sunset on a Hawaii beach, Bieniek dropped to one knee and presented the oval-shaped diamond.

The beach proposal was so surprising she could not believe what she was hearing. “I’m partially deaf in my left ear, and the wind was blowing. I couldn’t hear him.” Once she pieced together what he was asking, she quickly said yes. “Then we got in the car and that’s when it hit me. I started crying.”

“Konrad is not really the romantic type,” she added. “I was expecting us to get engaged a few months down the road, while we were at home in our pajamas with spaghetti on the floor.”

On Oct. 6 at La Colina, a 1930s Spanish guesthouse in New Hampton, New York, more than a handful of the 90 guests at Cannon and Bieniek’s wedding cried, too. Cannon, in lace cap-sleeve dress with a high neckline bought at Kleinfeld’s and a simple veil, walked with her father down a makeshift aisle on the guesthouse’s rustic upstairs veranda. Bieniek wore a navy blue suit with a black bow tie.

The Rev. Werner Ramirez, the couple’s minister at Fifth Avenue Presbyterian Church in Manhattan, led the ceremony, which included Bieniek’s handwritten vows in which he promised to learn and grow with Cannon for the rest of his life.

Then Cannon had a surprise for everyone.

Her maid of honor, Kimberly Pearson, handed her a sheaf of papers. Fighting tears and asking guests to bear with her, she read, in shaky Polish spelled phonetically, her own vows. Afterward, she translated for English speakers: “My heart, my Konrad,” she began. “You are my rock, my solid foundation that doesn’t waver. I’m glad we have come to this moment. I love you. This is our journey.”

Cocktails Guests nibbled on autumn-inspired crudités at a post-wedding cocktail hour on La Colina’s slate patio. The entrance to the property was lush with flowers and greenery, lanterns, candles and glowing string lights.

Sisters Before dancing and dinner, in a tent on the property, Monika Bieniek praised her new sister-in-law for dazzling the crowd with her vows. “Polish is one of the hardest languages to learn,” she said. “To pronounce all those words for native speakers took so much courage. She did it beautifully.”

American Groove A nine-piece band, Chevy Chevis, welcomed Cannon and Bieniek to the reception tent with Beyonce’s “Crazy in Love,” then quickly switched gears to Louis Armstrong’s “Give Me a Kiss to Build a Dream On,” for their first dance.