CEO pay: Millions at the top, a pittance below 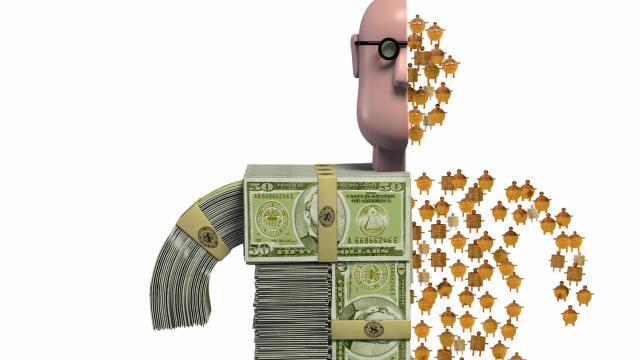 A Walmart employee earning the company’s median salary of $19,177 would have to work for more than a thousand years to earn the $22.2 million that Doug McMillon, the company’s chief executive, was awarded in 2017.

At Live Nation Entertainment, the concert and ticketing company, an employee earning the median pay of $24,406 would need to work for 2,893 years to earn the $70.6 million that its chief executive, Michael Rapino, made last year.

And at Time Warner, where the median compensation is a relatively handsome $75,217, an employee earning that much would still need to work for 651 years to earn the $49 million that Jeffrey Bewkes, the chief executive, earned in just 12 months.

These stark illustrations of income inequality are revealed in the Equilar 200 Highest-Paid CEO Rankings, which are conducted annually for The New York Times by Equilar, an executive compensation consulting firm. As economic uncertainty roils the country, the gap between top executives and everyday employees grows ever wider.

This year, publicly traded corporations in the United States had to begin revealing their pay ratios — comparisons between the pay of their chief executive and the median compensation of other employees at the company. The results were predictably striking.

“It’s grotesque how unequal this has become,” said Louis Hyman, a business historian at Cornell University. “For CEOs, it’s like they are winning the lottery year after year. For a lot of Americans, they don’t have any savings. When they lose their job, they lose everything.”

Live Nation and Time Warner did not reply to requests for comment. Walmart said it was increasing wages for low-paid workers.

The pay ratio rule, part of the 2010 Dodd-Frank banking regulation law, has been left untouched by the effort to roll back parts of Dodd-Frank now making its way through Congress.

As glaring as the ratios may seem, they tell an incomplete story. Some companies reported very low ratios and relatively high median incomes but rely on outsourced labor for important tasks. Other companies that reported very high ratios employ many workers overseas where pay is far lower than in the United States. And not all companies have reported their pay ratios.

“As much as these numbers reveal, they also hide,” said Hyman, who in August will publish “Temp,” a book about gig workers and the proliferation of part-time labor. “It all depends on who you consider to be an employee in this new economy.”

For example, Mattel, the toy company, owns its factories overseas and employs thousands of low-paid workers in Asia. As a result, Mattel reported the second-highest ratio on the Equilar list: The chief executive’s pay was 4,987 times that of the median employee.

Contrast that with Incyte, a drugmaker with the lowest ratio on the Equilar list. The chief executive of Incyte made just 64 times what the median employee earned. But unlike Mattel, Incyte outsources its factory work, allowing it to keep its workforce small and its median pay high.

At least some compensation experts harbor a hopeful view that over time, sustained scrutiny of the income gap might lead to a more equitable distribution of wealth.

“This could have beneficial results about how companies communicate with their employees,” said Jannice Koors, an executive compensation consultant at Pearl Meyer. “In a good year, if the CEO’s pay goes up, does the median employee’s pay go up, too? Does the company have profit-sharing that goes deep enough into the organization that the median employee is getting equity grants?”

That may be wishful thinking, and critics of rising income inequality are quick to point out that sustained low wages can lead to reduced economic growth and marginalize large swaths of the population. Disposable income is needed for a healthy economy, and people need the time and resources to take care of themselves and their families.

“Particularly in low-wage jobs, people are struggling to pay for housing, for health insurance, for child care,” said Jennifer Gordon, a law professor at Fordham University. “When people are working two and three jobs and are not able to put together a decent wage, then at a very basic level they don’t have time to be active in their children’s schools, they don’t have the ability to engage in their local politics.”

And still, executive pay, already excessive in the eyes of many critics, rises.

For the first time, two chief executives on the list were awarded more than $100 million each. Hock Tan of Broadcom received $103.2 million, while Frank Bisignano of First Data earned $102.2 million.

In 2017, the median pay for the 200 highest-paid chief executives was $17.5 million, and they received an average raise of 14 percent, compared with 9 percent in 2016 and 5 percent the year before that.

Among the 160 companies of that group that revealed pay ratios, the median compensation for chief executives was also $17.5 million. In contrast, workers earned $75,217, a decent salary in a country with a shrinking middle class but one that further demonstrates the growing gap between the C-suite and the typical employee. Equilar calculated that the median pay ratio disclosed by these companies was 275-to-1.

In defending these lavish awards, companies are quick to point out that much of this compensation is in stock, that many of the biggest awards represent long-term incentive plans and that, in some cases, the stock vests only if the company’s share price hits certain targets. As a result, they argue that the value of annual compensation packages can turn out to be much lower than initially stated.

That logic cuts both ways. If the stock does well, the total value of these compensation plans can be even greater than the large sums first reported.

In theory, such plans encourage chief executives to focus on creating value for shareholders. And at times, that pay seems to mirror the fortunes of the company. At Morgan Stanley, for example, shares were up about 20 percent last year, while James P. Gorman, the company’s chief executive, received a 16 percent pay rise.

It doesn’t always work out that way. Shares of TripAdvisor fell by roughly a third last year. Nonetheless, the company’s chief executive, Stephen Kaufer, was awarded a long-term incentive package worth some $43.2 million. And while chief executives are among the highest-paid people in the country — the country’s 200 chief executives on the Equilar list, almost all of them white men, were awarded some $4.4 billion last year — they are not alone in enjoying lavish pay. Others who don’t hold that exact title also did well in 2017.

David T. Hamamoto, a former CEO who until January was the executive vice chairman of Colony Northstar, a real estate company, was awarded $53 million last year. Larry Ellison, the founder, chairman and chief technology officer of Oracle, was awarded $41.3 million, adding to his net worth of some $57 billion.

Financiers at hedge funds, which are generally private and not included in the Equilar study, can earn billions of dollars a year. Michael Platt, the founder of BlueCrest Capital Management, earned $2 billion last year, according to Forbes. James Simons, a founder of Renaissance Technologies, earned $1.8 billion.

And two technology entrepreneurs who last year took their companies public were awarded generous pay packages but were not included on the list because they did not file proxy statements.

“The top layer of management live like kings and queens while the people at the bottom are scrabbling for a decent existence,” Gordon said. “We should not have that in a society where equality and fairness supposedly matter.”