Zebulon, N.C. — Down a narrow gravel road, Peter Chachaj stood outside in 40 degree weather last week. His hands were shaking, but grappling with the cold weather was worth it because he has waited three years to move into his new tiny home.

His new house, which is painted in shades of gray and rolls on six wheels, has opened a new frontier of home living for him and his family.

“My wife and I chose to do this for financial freedom,” Chachaj said. “And just do what we want to do, which is live our lives, maybe not work as hard or as many days a week, travel little bit more, (and) see what there is to see and not be cooped up inside all the time.”

Chachaj, 34, is among the thousands of people in the Triangle and the country who are turning to tiny homes instead of living in the traditional, three-bedroom, two-bath ranch style houses that previous generations gravitated to.

Tiny homes, which generally are no larger than 400 square feet, have become popular among Millennials.

According to the National Association of Realtors, Millennials make up 66 percent of first-time home buyers. And many of them have flocked to the small houses, which have generated their own television shows and diehard fans .

The trend is due, in large part, because finding an affordable home in the Triangle is not so easy anymore.

“The housing market is undersupplied,” said Tian Liu, Chief Economist at Genworth Mortgage Insurance. “A lot of people want to get into a house say into the $100,000-$150,000 range that they would have been able to get into a few years back, but they can’t.”

Chachaj, who originally owned a 1,700-square-foot house in Raleigh and works as a home security consultant, wanted to move to smaller digs because he wanted his housing costs to take less of a bite out of his monthly budget. And he was drawn to the tiny home market while watching television shows about them. 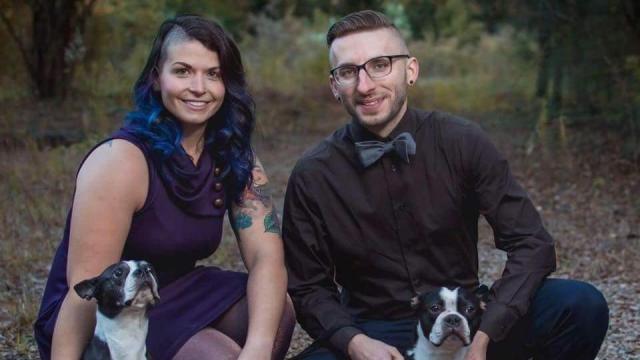 He said a tiny home meets the needs of his lifestyle and budget.

“The big thing really was to save money and not have to pay that mortgage.” said Chachaj, who survived the 2008 housing crisis. “And we still have all those modern amenities like a full kitchen, a full bathroom, entertainment, a place to relax. Those are the things that make us happy. We don’t need a big space for that.”

According to Tiny Home Builders, most of the tiny homes in the Triangle are located outside Raleigh’s city limits.

That’s because many tiny home are on wheels, and the City of Raleigh does is not consider them a permanent dwelling, meaning they are not recognized or covered under the city’s zoning laws.

Chachaj started designing his 295-square-foot home with his wife, Nacole, over a year ago.

His home is unusual for the tiny home market. He can control the house lights and thermostat with the touch of his cell phone — making it not only a tiny home, but a smart home, too.

The home also has other quirks.

Chachaj fashioned the living room to be designed around an IKEA couch. He constructed the rooms to have enough head room so he and his guests would not have to stoop to go from room to room. In an average tiny home, owners often have to crawl through spaces to get to their bed or closet.

He even has a hole in the bathroom under the stairs for his cat’s litter box. He tried to think outside of the box.

Chachaj’s home meets his living requirements without him stressing about a mortgage. In comparison to owning a traditional home, a 30-year fixed mortgage rate has increased to the highest level since March 2017, according to recent data published by Zillow.

“The big thing really was to save money and not have to pay that mortgage.” Chachaj said. “And we still have all those modern amenities like a full kitchen, a full bathroom, entertainment, a place to relax. Those are the things that make us happy. We don’t need a big space for that.”

More cities and people are turning to alternative solutions as a way of finding security in an uncertain housing market grows a little shaky.

“If I’m going to potentially live here for the rest of my life, I want to make it as great as I possibly can,” Chachaj said. “I was one of those people who found myself stuck in the last housing crisis, so I want to make this a space I can live in forever.”