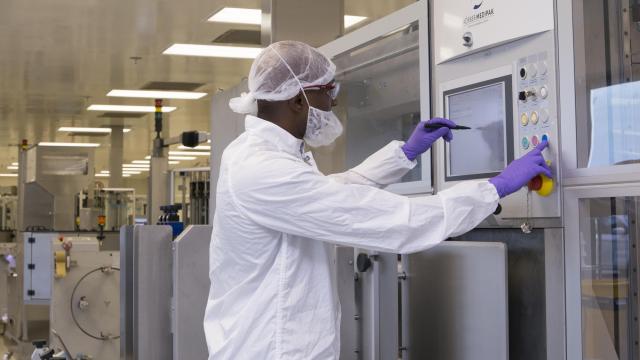 There are more than 667,000 military veterans living in North Carolina, which is approximately 8.3 percent of the state's adult population. Many of these veterans are below retirement age, which means they are often looking for civilian work.

As veteran James Benton said, finding the right career after the military can be challenging.

"It's not easy transitioning out of the military — it's anything but easy," said Benton. "There's a mountain of things you have to do to effectively do it, and you may not effectively do it the first time. I would challenge people to sit down and try to figure out what skills you have and also understand that you are trainable. You can spend time translating your skills from the military to civilian life."

Benton, who served as a senior logistics and operations manager in the 82nd Airborne Division of the Army, started doing just that after putting in his resignation papers to transfer out of the military in 2019. After seven years of dedicated service, he said it was time for him to apply the skills he'd learned in the Army "a little bit closer to home."

"I wanted to serve a little differently," said Benton. "Even though I'm not looking to train and prepare someone for war, I know good leaders are needed everywhere."

After putting in his Army resignation, Benton set his sights on the pharmaceutical manufacturing sector. North Carolina is an internationally known life sciences hub and Benton knew there were opportunities to be had in his home state. When it comes to biopharma jobs, military veterans in particular are great candidates for certain roles due to their highly transferable skill sets.

"North Carolina is known for its pharmaceutical companies. I have skill sets that are transferable in this field in multiple ways," said Benton. "I stumbled across an internship opportunity through NC4ME and the North Carolina Biotechnology Center."

NC4ME, an acronym for North Carolina for Military Employment, is "a coalition of organizations from the public and private sectors working together to implement a unique, employer-centric approach to military hiring." NCBiotech is a nonprofit organization dedicated to life science economic development in the state.

In June 2020 Benton attended a job fair where he met Elizabeth Ellis, the workforce development director at NCBiotech. He told her he was transitioning out of the military and looking for biopharma work. Ellis put him in touch with Seqirus, where he landed an internship as the company's first military intern.

Seqirus is a pharmaceutical company that uses "cutting-edge technology and proven expertise to develop influenza vaccines and respond to pandemic threats." Benton spends his days working in the quality department and has been able to leverage his leadership, logistics, and problem-solving skills in his work.

"I'm humbled to be the first military intern at Seqirus because it helps the company establish a relationship with veterans like me who are transitioning out of the service," said Benton. "I handle technical product complaints and any minor or major investigations of the product line of vaccines. If there's an issue, I investigate it. We try to determine the root cause, solve the issue and prevent them from happening again in the future."

Benton's military background has helped shape who he is as a man and a worker. Adept at following orders, adhering to regulated processes, and working with a team, he's been able to easily transfer his skills to a civilian job in biopharma.

"Veterans have both the soft and the hard skill sets necessary to be successful in biopharma careers. In the military we have to wear a lot of different hats and do things to a standard. We know how to be leaders. We can help bring leadership to organizations and teams," said Benton. "There are also a lot of mirror adjacent types of environments in biopharma and in the military. For example, we're both heavily regulated and have a governing way to manage correspondence."

And to veterans like Benton, perhaps most importantly, is the meaning and purpose that comes along with a job in biopharma.

"With biopharma, there's a meaning and purpose," he said. "Generally speaking, in the military, we're serving our country to protect American citizens and their rights. From a meaning perspective, you find a lot of veterans who run into the issue of getting out of the military and asking themselves how they can find meaning. How can they find a level of camaraderie? With biopharma, particularly at Seqirus, we are making individual products that can save someone's life. There's a purpose, mission and meaning behind that."

This kind of meaning can be a source of motivation for a transitioning service member, according to Benton.

Benton's internship concluded in December 2020 and he is actively applying to biopharma positions, including ones at Seqirus. He's hoping to land something in supply chain due to his military background in logistics and supply chain.

Benton described his time at Seqirus as supportive, collaborative, and a great environment to be in and he has high hopes for the future. His advice to fellow veterans transitioning out of the military is to be patient and humble and to know they have skills that are transferable and valued.

"There's lots of different people at different places in their life that are coming out of the military. There are resources like NC4ME and NCBiotech that can help you start your next chapter," he said.