At least 5 dead in military plane crash in Savannah

Savannah, Ga. — An Air National Guard C-130 cargo plane crashed Wednesday near the airport for Savannah, Georgia, killing at least five people who were onboard the aircraft, authorities. 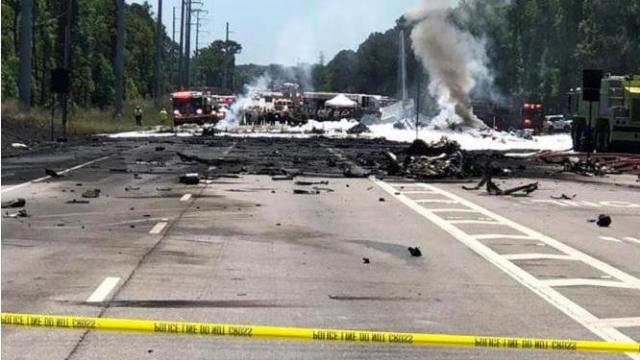 The plane crashed at the intersection of two roads, the Chatham County Emergency Management Agency said in a tweet.

A photo tweeted by the Savannah Professional Firefighters Association shows the tail end of a plane and a field of flames and black smoke as an ambulance stands nearby.

The only part of the plane that remained intact was the tail section, said Chris Hanks, the assistant public information officer with the Savannah Professional Firefighters Association. The tail section was sitting on Highway 21 and the ground in front of it was black and littered with debris, he said.

Firefighters had put out the blaze but were still using a mixture of water and foam to take care of any remaining hot spots.

Savannah's Air National Guard base has been heavily involved in hurricane recovery efforts in Puerto Rico. In September 2017, it was designated by the Air National Guard as the hub of operations to the island nation in the aftermath of hurricanes Irma and Maria, the based announced at the time.

Savannah/Hilton Head International Airport said on social media that some flights were being affected though the crash happened off its property. The airport advised passengers to check with their airline for updated flight information.