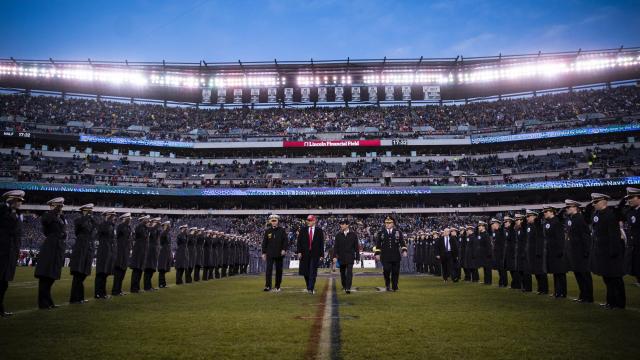 U.S. military officials said they were investigating whether Army cadets and Navy midshipmen had flashed hand symbols associated with hate groups at their football game Saturday.

A broadcast showed cadets from the U.S. Military Academy and midshipmen from the Naval Academy in the stands displaying the sign at least five times behind ESPN broadcaster Rece Davis at the game, which was held at the Lincoln Financial Field in Philadelphia on Saturday.

President Donald Trump attended the game and met with players in both locker rooms beforehand.

“West Point is looking into the matter,” Lt. Col. Christopher Ophardt, a spokesman at the military academy, said in an email Sunday. “At this time we do not know the intent of the cadets.”

Naval Academy officials have appointed a “preliminary inquiry officer to conduct an internal investigation into the hand gestures,” Cmdr. Alana Garas, an academy spokeswoman, said Sunday evening. “Based on findings of the investigation, those involved will be held appropriately accountable. It would be inappropriate to speculate any further while we are conducting this investigation.”

The gesture, which looks like an OK sign, is formed by “the thumb and forefinger joined together in a circle, the remaining three fingers splayed out behind,” according to the Southern Poverty Law Center.

The center, a nonprofit group that monitors hate groups, noted last year that white nationalists, neo-Nazis and Klansmen “have increasingly begun using the use of the symbol both to signal their presence to the like-minded as well as to identify potentially sympathetic recruits among young trolling artists flashing it.”

The Anti-Defamation League described the symbol as a hate sign that forms the letters “WP” for “white power.” Officials of the U.S. Coast Guard reprimanded a service member who flashed a similar gesture in the background of a television interview on MSNBC last year.

Viewers of the football game Saturday noticed the gestures and shared clips on social media.

“Please someone tell me I didn’t see what I thought I just saw,” one user wrote on Twitter, asking “white power sign?”

“They are well aware of what they are doing and think it’s funny. Disgusting,” another Twitter user wrote.

Although the intent behind flashing the symbol was unclear, the gesture is also part of a juvenile prank popular in junior military ranks called the circle game: A person makes the OK symbol below the waistline, and if another person looks at it, the person making the gesture is allowed to punch the other, often in the arm.

On Twitter, Trump congratulated the Navy Midshipmen, who defeated the Army Black Knights, 31-7, in the annual rivalry game.

The episode at the game comes after West Point announced that it had removed a racist slogan from its team’s spirit flag. The flag had a skull and crossbones and “GFBD,” which stands for “God Forgives, Brothers Don’t” — a slogan that has been associated with white supremacists. The team is continuing to use the flag without the letters.