Durham, N.C. — Dexter Mills says his 2000 Honda Accord has gone the extra mile 1 million times over.

Mills, who lives near Southpoint, is a self-employed vehicle inspector who travels across the state to various shops and dealerships. He estimates he logs about 65,000 miles a year.

These days, it's his car getting all the attention.

“It’s been absolutely phenomenal," said Mills, who bought the car brand new in Raleigh. "I still average anywhere from 440 to 460 miles out of a tank of gas.”

The Accord became his primary work vehicle in 2006 after his wife purchased a new car.

"I've put a little over 800,000 miles on it myself," said Mills, who recently hit 1 million miles while driving in Fayetteville. 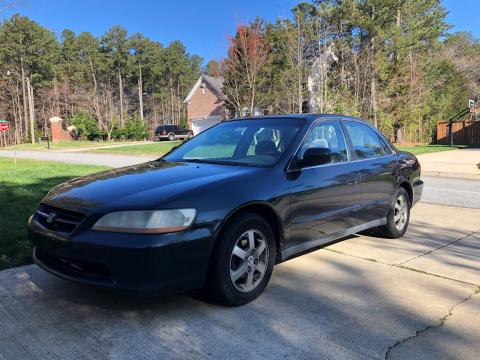 “I pulled over when it got to 999,999, I took a picture and I started to drive and I'm waiting on the odometer to hit a million and it doesn’t, it stops there.”

A former automotive technician, Mills says he was able to save money by doing most the maintenance work himself.

Mills stresses the importance of regular oil and filter changes and says the way you drive matters.

“Probably one of the biggest things is I don’t drive cars hard. Every car that we own or have owned, I typically drive it in a non-aggressive manner," he said. "I don’t do jack rabbit starts.”

Mills says he has started to shop around for a new set of wheels. He plans to upgrade to an SUV, but he hasn't decided which make and model he'll buy.

Joe Fisher is a multimedia journalist at WRAL. He covers breaking news and can be seen on-air weekdays 4:30-7 a.m. on WRAL Morning News and 7-9 a.m. on FOX50. Joe is from Philadelphia, Pa. and enjoys writing, running, reading the paper copy of the newspaper, talking and a good cup of coffee! You can reach him by email at jfisher@wral.com or on Facebook, Instagram or Twitter.