Mike Birbiglia Sounds Off on Cellphones in His Theater 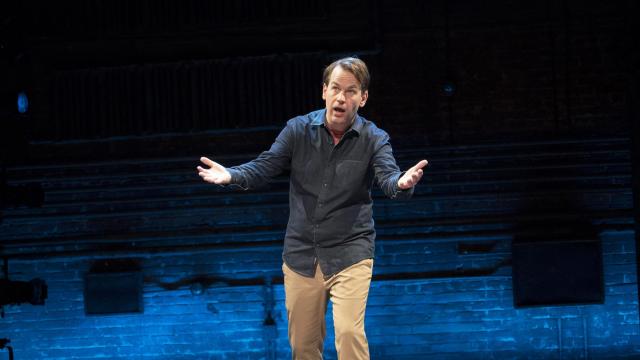 NEW YORK — Mike Birbiglia was just a few minutes into his one-man Broadway show the other night when he spotted the woman in the front row, pecking away at her cellphone. He stopped his storytelling, walked toward her seat and addressed her from the stage. “A little housekeeping here: Maybe don’t text,” he said, before pointing out the obvious: He could see her, and her phone.

Midway through the show, he saw a patron pointing a camera at him from the mezzanine. “I can see you videotaping,” he said. Then, ruefully, he mused that in the future, theater might just consist of actors on a stage, staring at a sea of screens.

“The New One,” Birbiglia’s well-reviewed comedy about fatherhood, has been running only since Oct. 25, but already he has had several run-ins with cellphone users, whose devices have at times gone off during intensely personal moments of revelation. His show is not alone: The sound of a ringtone or the sight of a glowing screen is a regular occurrence on Broadway, as in every other corner of the culture.

But Birbiglia, because he is playing a version of himself and engages with the audience, is able to respond directly, and he does. In an interview on Tuesday, he talked about how he is managing the interruptions; he also provided audio clips of several interactions. Here are edited excerpts from the conversation.

Q: How often have you had to call someone out for using their cellphone during a show?

A: It’s weird — it has happened four out of the last five shows. People think I like it because I have jokes for it, but it’s literally just years of battle armor — road calluses built up from dealing with inappropriate audience behavior.

Q: How do you figure out what to say?

A: I talked to Steve Martin about this once — he’s obviously a genius at dealing with audiences — and he says the best way to respond to something happening in the audience is honestly, which is what I try to do. I basically try to bring people into my head as it’s happening, which is to say: “OK, guys, we all know this inappropriate thing has happened. We’re all witness to it. We’re not going to skewer the person because that’s not in the spirit of theater, or kindness, but we’re going to acknowledge it so that it doesn’t ruin the shared experience we’re all attempting to achieve together.” And then you’ve got to get the story back on track.

A: I do, mostly. A majority of the time, I ignore it. And sometimes I just try to make eye contact with the person. It’s only when it’s really hurting the experience of the people around those people that I feel like we have to acknowledge it.

Q: Do you get angry?

A: There is some school of thought that you should be furious or indignant or tell the person to screw off, but I don’t think that that’s quite right for a few reasons. One, it’s probably an honest mistake — there’s 1,000 people in the room, and there’s bound to be someone who had a lot going on in their day and it just escapes them and their head is jumbled or whatever and so to scream at somebody in a situation like that doesn’t feel quite right. And with my show, the calibration of whether the audience likes me or doesn’t like me is very delicate — my character does things wrong and does things that are questionable and does things that the audience might not agree with — so if I went nuts and said “You are a disgusting menace,” people would be like, “You know, I don’t think I like him too much.”

Q: How does the audience react when you call someone out?

A: The audience loves it. It’s a selfish thing to let your phone go. And so when someone calls that out, and says, “Hey, maybe this isn’t the best time,” it’s fun for the audience.

Q: Unlike other Broadway performers, you don’t have to break character. Do you have any wisdom for actors in more traditional plays and musicals?

A: Those folks have a real challenge ahead of them. I saw “The Ferryman,” which I loved, and it’s so deeply intense, and I honestly think that if an actor broke out of character, I don’t think I could handle it. I would be broken from the spell. So then I feel like it’s on the audience to police each other, and it’s on the ushers to police the audience. But I don’t think our culture knows the answer.

Q: Has your cellphone ever gone off at a performance?

A: No. It’s my biggest fear in my life — that or just being in a public place and having a bloody nose.