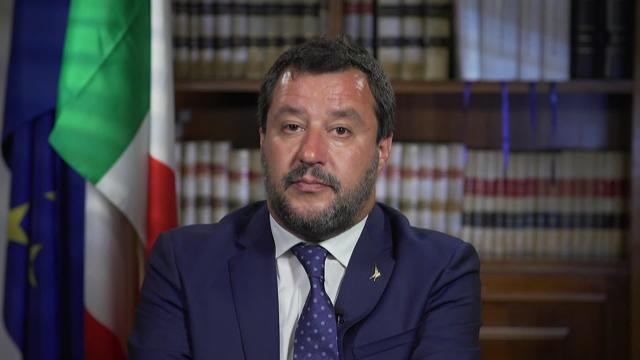 CNN — The rescue vessel Alex docked Saturday in the Italian port of Lampedusa, carrying more than 40 shipwrecked migrants despite being banned by Matteo Salvini, the country's far-right Interior Minister.

The Italilan-flagged boat, operated by Mediterranea, a pro-migrant NGO, was greeted at the port by a line of police officers deployed by Salvini.

Later, Salvini said via Twitter the migrants were off the boat following the legal seizure of the vessel. He also announced an investigation against the crew members for allegedly aiding illegal immigration.

Mediterranea said it was pleased the rescued migrants were finally receiving medical attention after several hours waiting in port, but called the investigation "baseless."

Earier in the day, Salvini asked the Alex to abandon Italy's waters and sail for Malta's capital, Valletta, where officials had agreed to let them through.

But Mediterranea argued that sailing to Malta would mean "putting the health and safety of people on board of Alex at serious risk."

Italy's Public Television (RAI) reported that the Alex ran out of water and was overcrowded. The vessel has a legal capacity for 18 people, but was hosting 41 migrants and several crew members.

RAI also showed images of the migrants wearing orange life vests while trying to hide from the sun using rags and blankets.

The German charity Sea-Eye's vessel, the Alan Kurdi, carrying dozens of rescued migrants, was near Lampedusa Saturday but changed course and headed to Malta. The ship was named in honor of the Syrian boy whose body washed ashore in Turkey during the 2015 migrant crisis.

"We cannot wait until the state of emergency prevails," Sea-Eye said on Twitter. "Now it has to be proven whether the European governments stand by Italy's attitude. Human lives are not a bargaining chip," the group said.

The NGO reported the vessel picked up 65 people in an inflatable boat about 34 miles off the Libyan coast Friday morning.

The Alex was the second migrant boat to arrive in Lampedusa in recent days. Last week, a migrant boat belonging to Sea-Eye entered Italian waters in defiance of the ban applied by Italian authorities. The ship's captain, Carola Rackete, was arrested.

Rakete was facing a desperate situation after the ship had been stranded in the Mediterranean for two weeks.

An Italian judge ordered her release this week. Since her arrest, nearly $1 million has been raised for her legal defense.

Salvini has accused NGOs of aiding smugglers and said, "I do not authorize any disembarkation of those who do not care about Italian laws and instead help smugglers."

Speaking on Facebook Live Saturday night, Salvini said, "If someone was used to considering Italy as the arrival point for all and a dumping site for all the problems Europe pretend not to see, that's enough."

Salvini raised a formal complaint against the government of Germany after receiving a letter from his German counterpart.

"The German government asks me to open Italian ports to boats? Absolutely not. We ask [Angela] Merkel's government to take the German flag off boats that help traffickers, and to repatriate their citizens that ignore the Italian law," he said.

Germany is ready to welcome some of the migrants who are on board the two German NGO ships, German Interior Minister Horst Seehofer said.