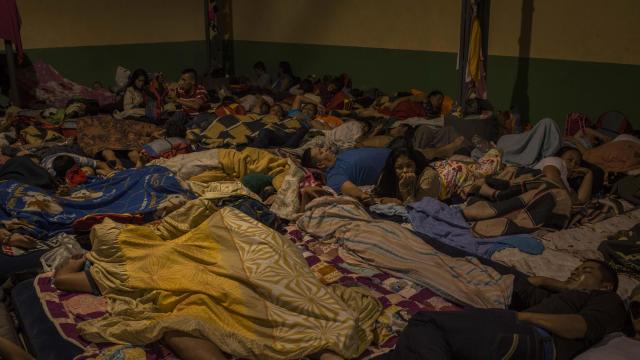 TAPACHULA, Mexico — In open defiance of the Mexican and U.S. governments, thousands of Central American migrants, part of a caravan that has been heading toward the United States for more than a week, resumed their journey on Sunday in southern Mexico.

The Mexican government, which has been under pressure by President Donald Trump to stop the caravan, had ordered the migrants to submit to processing by the immigration authorities at a legal border crossing.

But thousands chose instead to move on — part of a group of people who had been stopped at the Mexican border this week after having traveled for several days, most from their homes in Honduras.

Most of the migrants on the move on Sunday — by one local government estimate more than 7,000 people, the majority of the caravan — had crossed the border illegally in recent days by swimming or rafting across the Suchiate River, which separates Guatemala from Mexico.

They gathered in the central square in the Mexican border city of Ciudad Hidalgo on Saturday and voted by a show of hands to continue their journey north despite their undocumented status.

“We want to get to the United States,” said Maria Irias Rodriguez, 17, a migrant from Tegulcigalpa, Honduras, who was traveling with her 8-month-old daughter, 2-year-old son and husband. “If they stop us now, we’ll just come back a second time.”

She said she had waited at the border until mid-Saturday but became desperate at how long it was taking to be processed.

On Sunday afternoon, Trump took to Twitter again to address the caravan, saying that those migrants seeking asylum must first apply in Mexico. “If they fail to do that, the U.S. will turn them away,” he said.

But Mexican officials have said migrants seeking asylum are under no legal obligation to apply in Mexico.

Under a proposed bilateral agreement that the Trump administration has discussed with Mexican officials, U.S. border officials would be able to legally turn back asylum-seekers who first pass through Mexico, forcing them to seek protection south of the border.

In southern Mexico on Sunday, officials made barely any effort to halt the migrants as they walked along a main highway. Federal police officers were at times present on the road, monitoring the procession, and a police helicopter circled overhead, but the authorities allowed the procession to carry on unimpeded.

At one point a senior migration official standing in the back of a police pickup truck urged the migrants to register themselves with the authorities and seek legal immigration status, saying that the migrants could not cross the country without documentation.

But people said they feared being deported and the group kept moving north. By evening most of the migrants, extremely weary from the arduous walk, had reached the city of Tapachula, about a 20-mile journey by road from Ciudad Hidalgo.

The group planned to continue their journey north on Monday. The caravan is part of a tradition of mass migrations, often organized by advocacy groups, meant to provide safety in numbers to migrants, who face many threats to their safety along the perilous migrant trail. Many say they are fleeing economic distress and violence in their homelands.

Such caravans have usually numbered in the hundreds and have passed unnoticed. But the current caravan, by far the largest on record, has angered Trump, who has seized on it as a campaign issue to fire up his base before the midterm elections.

While other caravans have generally withered as they have progressed north, this one has grown, perhaps in part as a result of all the media attention it has received.

Mexican authorities warned as the migrants’ approached that only travelers with valid documents and visas, or with claims for asylum or other forms of protection, would be allowed into Mexico. They threatened deportation for those who tried to enter illegally, and said they would process the migrants one by one.

But on Friday morning, thousands tried to cross the border en masse, surging past Guatemalan border guards before being turned back by a contingent of unarmed Mexican riot police officers.

Officials said that as of late Saturday, they had received 640 asylum requests from caravan members at the border. Some migrants were taken to a local fairground that had been converted into a temporary government shelter. Many others remained on a bridge spanning the Suchiate River, waiting to be processed by Mexican officials.

Officials also said that some migrants might be eligible for humanitarian visas, or even for safe-passage permits that would allow them to travel to the northern border of Mexico and apply for protection in the United States. In response to another migrant caravan last spring, Mexican officials distributed hundreds of safe-passage permits to participants.

The revived caravan started moving on foot toward Tapachula about 5 a.m. on Sunday, and the procession was orderly and peaceful. Some Mexican residents along the road cheered for the group or handed out bananas, tortillas and water.

Several hours into their journey, Francisco Echevarria, a top federal migration official in the state of Chiapas, appeared in a police pickup truck, and urged the migrants to register at a shelter.

When the migrants demanded proof that they would not be deported if they did so, Echeverria offered to take several to the shelters to show that people were not being deported, and to begin their asylum processes. About 10 of the migrants took him up on his offer and hopped in the back of the truck.

Among the people in the procession was Juan Carlos García García, 16, from Honduras, where he had been a laborer in the coffee fields.

“It’s not a crime to migrate,” he said as he marched north. “We’ve not done anything against Mexican law.”

He added: “They said they weren’t going to allow us to pass. But God has the last word.”