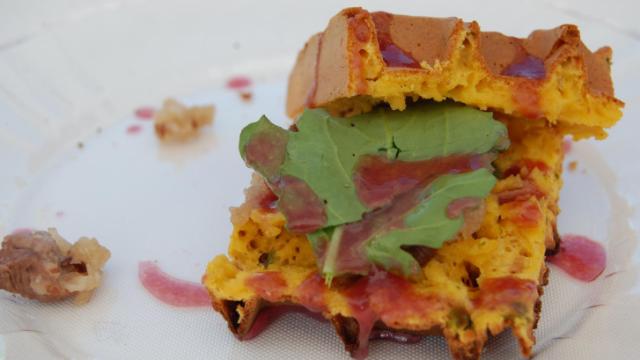 Raleigh, N.C. — It was a battle of "iron" proportions when four North Hills' chefs battled it out during the Midtown Farmers' Market Saturday.

Gluten Free Bakery Whetstone Homegrown's jams and relishes and Got Thyme's flavored baked goods were popular among the chefs in addition to the wonderful produce available.

After shopping, teams had an hour to prepare both dishes.

LittleJohn, who also competed in the recent Fire in the Triangle chef competition, had a plan for her second course - to create a variation on the traditional chicken and waffle concept. Instead she wanted to create a more savory waffle featuring duck.

VanGaasbeek zeroed in on creating a delicious apple vinaigrette featuring Gluten Free's Apple Butter to go on his first course - a kale salad.

Greiner, who used to work with LittleJohn, got to work using Got Thyme's lemon and poppyseed zucchini bread as croutons in his first course.

Lowery focused on creating a persimmon jam to use on his first course which featured pieces of fried zucchini served on a bed of beer cheddar bread from Got Thyme.

The first courses were mainly salads with Mia Francesca's kale salad drawing praises from the judges. The pieces of apple and vinaigrette provided a nice bite.

The second courses were much more diverse. Coquette's savory waffle with bits of fried duck on top not only looked delicious, but had me trying not to finish my plate. I had to save room for Mia Francesca's seared duck over a purple sweet potato puree. 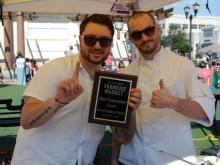 Vivace went for a simpler approach just serving up the pan-seared duck, garnished with some radish and covered with a light drizzle of muscadine sauce.

Mura served the duck in a lime-ginger hash that was refreshing and delicious.

Unlike the first course, the second was also plated up for folks at the farmers market. A lucky group of 30 people obtained People's Choice voting cards.

The judges' scores for both dishes were used to help calculate the overall winner and the winner of the "best presentation" award. The People's Choice award was solely based on market voters.

In the end, Mura was named the Iron Chef Challenge winner, while Vivace took home the award for best presentation. Mia Francesca was the People's Choice winner.