Midterm Elections 2018: Closing Arguments in Pennsylvania, Georgia and Across the U.S. 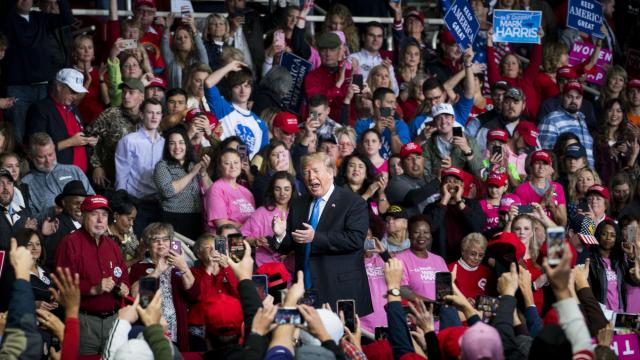 New York Times journalists are reporting from around the country this weekend as candidates make their final pitches to the voters who will help shape the United States for the next two years.

The governor of Florida, who is also the state’s Republican nominee for Senate, stood in the back of La Roca Firme, an evangelical church, ostensibly to shake hands with parishioners as they walked in for the Sunday morning service. But, this being Hialeah, an overwhelmingly Latino Miami suburb and one of the most Republican cities in the state, the people demanded hugs. And kisses on the cheek.

Scott, he of the stiff, not-so-touchy-feely Midwestern upbringing, obliged — and seemed to enjoy it. At one point, he even bopped his head to the contemporary Christian Latin rock song being played onstage.

“I’m about to go vote!” one woman told him in Spanish.

“I voted for you yesterday,” said another one, also in Spanish.

“I saw you in Fort Myers with the president on Wednesday,” offered a man. Then, to be sure the governor understood, the man flashed him a thumbs up and switched to English: “Very good!”

Scott, who speaks halting Spanish, has made appealing to Florida’s Latino community — especially conservative-leaning Cuban Americans in south Florida — central to his campaign. But the church audience on Sunday was not traditionally Cuban; the Rev. Pablo Lago, for example, is originally from Uruguay.

“He is a very simple man with a sweet heart,” Lago said. “He’s a believer.”

Scott, who is locked in a tight race against the Democratic incumbent, Sen. Bill Nelson, ducked out right before things got too political: As the governor said his goodbyes in the lobby, Lago urged his flock to reject abortion, “the homosexual agenda” and “transgender bathrooms.”

Next on Scott’s calendar for the day was campaigning to a decidedly different crowd: Bikers for Trump.

— The year of the woman, in Pennsylvania especially

STROUDSBURG, Pa. — There are no women in this state’s 21-member congressional delegation, the only large state without any. Come January, there will be at least one, because a woman is running against a woman in one race.

And there will likely be more: Polls have four of the seven women running for congressional seats here favored to win — all Democrats. Of those, Susan Wild, running here in a district that includes the old steel towns of Bethlehem and Allentown as well as this one on the edge of the Poconos, was considered to have the toughest race. But national Republicans did not do much to help their nominee, Marty Nothstein.

On Saturday, Wild, the mother of two adult children who was the first female city solicitor in Allentown, was wearing a T-shirt saying “A Wild Woman Belongs in the House,” and traveling to all the launch sites for volunteers going door-to-door to support her.

Buses had arrived from New York and Washington carrying volunteers looking to help a candidate in a swing district. Some from Columbia University had informed the campaign they were vegans; luckily there were options for them in the dinner buffets that Muslim groups had prepared for the campaign. (Wild, known for bringing snacks to events, bought them coffee and almond milk.)

Many of the college women, Wild said, were focused on electing more women. But many volunteers said they were driven by moral concerns: racism, misogyny, anti-Semitism and President Donald Trump’s response to immigration.

NEW YORK — Republicans criticized a “Saturday Night Live” star on Sunday after a “Weekend Update” joke poked fun at a Texas congressional candidate and former Navy SEAL who lost an eye in a roadside bomb explosion in Afghanistan.

“I’m sorry, I know he lost his eye in war or whatever,” Davidson said.

The backlash was immediate. The National Republican Congressional Committee referenced Davidson’s recent breakup with Ariana Grande in a statement saying, “Getting dumped by your pop star girlfriend is no excuse for lashing out at a decorated war hero who lost his eye serving his country. Pete Davidson and NBC should immediately apologize to Dan, and to the millions of veterans and military families who tune in every weekend — because they’re not laughing.”

Rep. Pete King, R-N.Y., who was also mocked in the segment, tweeted that the segment was a “disgrace.”

— Democrats seeking a comeback in Kansas

KANSAS CITY, Kan. — Kansas Democrats, long relegated to the political margins, see a chance for a breakthrough election Tuesday. But converting that optimism into victory will require turning out supporters who have grown accustomed to losing.

With that in mind, the Democrats seeking to flip the governorship and two of the state’s four House seats spent Saturday meeting voters on some of this red state’s bluest turf.

In a leafy Topeka neighborhood, Paul Davis, a Democrat running for Congress in a district long held by Republicans, started the morning with supporters who were preparing to knock on the doors of union members. A few hours later, at a Pentecostal church hall in Kansas City, Laura Kelly, the Democratic nominee for governor, and Sharice Davids, who is running for Congress, went table to table shaking hands and posing for photos.

Kelly, a state senator, has polled nearly even with the state's Secretary of State Kris Kobach, her Republican opponent. She is trying to avoid a repeat of what happened here four years ago, when Democrats entered Election Day confident about flipping the governorship but lost amid poor turnout in Wyandotte County, which includes Kansas City.

“Wyandotte can really swing this election, and you want to do that,” Kelly told members of New Bethel Church as they snacked on hot dogs and Doritos. Out of Kansas’ 105 counties, Wyandotte was among only two where voters preferred Hillary Clinton to President Donald Trump in the 2016 presidential election.

MARIETTA, Ga. — The volunteers filed in to Cobb County Republican headquarters to report the number of houses they had door-knocked for candidates up and down the ticket on Saturday. Fifty-two, said Pat Gartland, a longtime party stalwart; 150, reported Bob Maynard. Facing a tight race for governor, for which Democrats have mustered a small army of organizers around the state, Republicans were determined to rouse their troops as well.

The men were pleased — most of those they talked to either had voted already or were determined to cast their ballots for Brian Kemp, the Georgia secretary of state and Republican candidate, and their local state representative, Sam Teasley. Kemp’s race against Stacey Abrams has been particularly contentious; his office said Sunday that officials had opened an inquiry into the Democratic Party of Georgia for trying to hack the state’s voter registration system, a charge the Democrats called “100 percent false.”

Fairuz Rafique, 30, stood out at the headquarters among the cluster of white, older men. An entrepreneur, he left his native Bangladesh when he was 11, and believes Republicans best exemplify the ethos of hard work and personal responsibility that brought his family prosperity.

He volunteered to canvass near his own home in nearby Austell — just outside Atlanta — and found most of his neighbors were Democrats, part of a wave of African-Americans, Latinos and Asian-Americans who have made this once solidly Republican area more competitive.

Rafique encountered T.C. Maxwell in his yard and made his pitch: “When’s the last time you saw 4.1 percent economic growth?”

“Normally I lean toward the right,” said Maxwell, 59, a businessman and minister who is black. “I like what the president’s doing, but I don’t like when he opens his mouth. We got to walk and talk together after the election, and some of the stuff happening now is scary.”

Rafique said he did not agree with everything the president did, but thought Trump deserved a chance. Maxwell said he was undecided on his vote, and the two parted amicably. “God bless,” Maxwell said as Rafique walked to the next door.