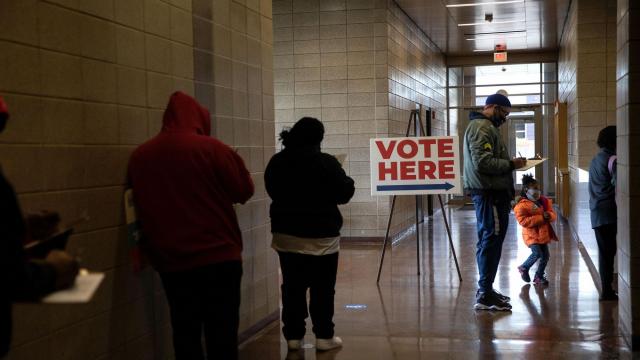 CNN — The Wayne County, Michigan, Board of Canvassers on Tuesday voted unanimously to certify the county's presidential election results ahead of a deadline, a shocking turn of events after the two Republicans on the board had earlier blocked the same move.

Michigan Secretary of State Jocelyn Benson said on CNN's "Cuomo Prime Time" that the board had voted to certify the results and directed her to audit precincts that had discrepancies.

Earlier in the day, the four-person board had deadlocked along partisan lines, with the two Republicans voting to block certification of the presidential election in the county, which houses Detroit and is the state's most populous.

President-elect Joe Biden won Michigan by more than 148,000 votes, a win made possible by a strong showing in Wayne County. If those votes weren't eventually certified, it could have jeopardized Biden's claim to Michigan's electoral votes. President Donald Trump has mounted a longshot attempt to overturn the election results through lawsuits and with the Electoral College, though GOP lawmakers in Michigan have said they'll respect the statewide popular vote.

During the meeting of the Wayne County Board of Canvassers, Vice Chair Jonathan Kinloch called the earlier deadlock "reckless and irresponsible." Kinloch is one of the two Democrats on the panel.

"This board, over the years, has taken pride in not allowing politics to show itself in the actions of what we do," Kinloch said. "There is no reason under the sun for us to not certify this election. I believe politics made its presence here today, and I think forever that this board will have to live with the fact that we have allowed external, non-relevant issues to impact this decision today, hoping to change and bring about an outcome that will not happen."

The Republican chair of the board, Monica Palmer, explained why she had earlier voted against certification.

"Based on what I saw and went through in poll books in this canvas, I believe that we do not have complete and accurate information in those poll books," Palmer said.

In Benson's statement, she said it was "common" for some precincts to have minor discrepancies with their poll books. But she also said, "Importantly, this is not an indication that any votes were improperly cast or counted."

Election experts and Michigan insiders reacted with shock to the original vote.

"The people have spoken: Joe Biden won Michigan by more than 140,000 votes," Gov. Gretchen Whitmer, a Democrat, said in a statement. "Today's action is a blatant attempt to undermine the will of the voters. The process, however, will move forward. Under Michigan law, the Board of State of Canvassers will now finish the job and I have every expectation they will certify the results when the job is done."

Nancy Kaffer, a columnist at the Detroit Free Press, tweeted, "This is unprecedented in my 20 years covering government here." Amy Walter of the nonpartisan Cook Political Report tweeted, "There has been zero evidence of fraud here or elsewhere" and said Republican efforts to block certification "does real and lasting damage to our institutions."

"It's so politically transparent that I doubt it will hold up in the long run," Ben Ginsberg, one of the most prominent Republican election lawyers in the country, told CNN's Erin Burnett on Tuesday night.

The GOP-led Michigan Senate voted in September in support of resolution confirming that the state's electors should be faithful to voting for the presidential candidate as certified by Michigan's election officials, Amber McCann, deputy chief of staff for Senate Majority Leader Mike Shirkey, confirmed to CNN.