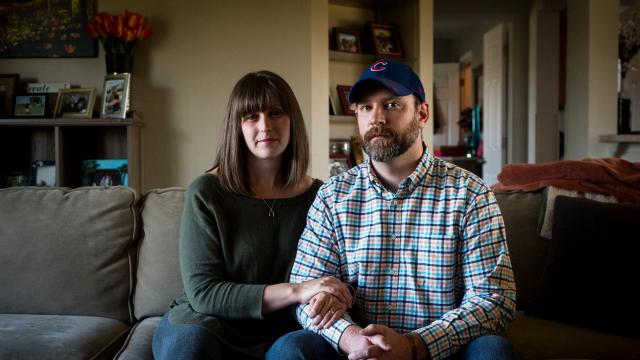 A Michigan woman said she was denied a medication for her miscarriage by a pharmacist at a supermarket who refused to fill the prescription because of his religious beliefs, then declined to help her obtain the drug elsewhere.

The pharmacist was no longer employed at the supermarket chain, Meijer, a company spokeswoman said Thursday.

The woman, Rachel Peterson, 35, of Ionia, Michigan, became pregnant earlier this year, but an ultrasound at the end of June revealed that the fetus no longer had a heartbeat. She and her husband headed to a family member’s home in northern Michigan, more than three hours away, to decompress.

Her doctor prescribed her misoprostol, a drug that would make the miscarriage process happen faster and could help her avoid an invasive surgical procedure.

“It was conveyed to me by my doctor that if things hadn’t progressed in the next couple of days, that I was instructed to start the medication,” Peterson said. The days came and went, and still nothing.

On July 1, she and her husband were about to leave to pick up the medication at the Meijer pharmacy in Petoskey, Michigan, when she said she received a call from the pharmacist, who “stated that as a good Catholic male he could not in good conscience fill this medication.”

Peterson, who works in a hospital as a cardiovascular sonographer, said she was “baffled.” She has lived in Michigan her entire life, she said, and had never been denied a prescribed medication.

She explained to the pharmacist, whom she identified as Richard Kalkman, that her fetus was no longer viable and that she needed the medication to complete the miscarriage safely.

But “he didn’t believe me,” Peterson said, and told her that he “couldn’t support an abortion.”

He also refused her requests to speak to another pharmacist or to the manager, she said.

“I wanted a baby; I didn’t want to lose a baby,” Peterson said. “I felt ashamed, and I didn’t have to tell him that information but I thought, for my safety, to be able to have children again, this was an important step to take. And he denied that to me.”

Christina Fecher, a spokeswoman for Meijer, said in a statement that Kalkman “has not been employed by Meijer since early July 2018.” The statement continued, “While we cannot comment on any pharmacy customer matter, we apologize for any customer experience that does not align with our core values.”

It is also a violation of the guidelines set forth by the Michigan Pharmacists Association, a professional organization of which Kalkman was not a member. But Michigan law does not bar pharmacists from engaging in conscientious objection, said Larry Wagenknecht, the chief executive of the organization.

Dr. Sarah Horvath, a family planning fellow at the American College of Obstetricians and Gynecologists, described miscarriage as a “painful and messy process.”

Oftentimes, she said, women choose to use misoprostol because it is more autonomous, discreet and self-directed than other methods.

“Some women derive empowerment from a situation where they might otherwise feel helpless,” she said.

When Peterson realized she was not going to receive the medication at the pharmacy in Petoskey, she called the Meijer pharmacy in her hometown, and connected with a pharmacist who helped her fill her prescription that day. She and her husband cut their trip short, and made the 3 1/2-hour drive back home.

She reported the episode to a Meijer manager, and received a call from a regional director at the company, who said the company would be investigating.

But nobody from corporate contacted her, she said, so she approached the American Civil Liberties Union, which filed a complaint Tuesday.

The ACLU complaint said that if a man had requested the same medication, which is also used to treat stomach ulcers, he would not have been denied, but because Peterson is a woman, the pharmacist incorrectly assumed she wanted to terminate her pregnancy.

Lara Chelian, the director of advocacy and development at the Northland Family Planning Centers, said a pharmacist’s choice not to fill a prescription for religious reasons is a case she has seen time after time.

“What we hear from our patients is that they are not being advised that someone else in the same company can fill the prescription,” Chelian said. “In fact, the pharmacists are just stating they refuse to fill it or will not fill it.”

Her organization has had to call “multiple times,” Chelian said, to tell the pharmacist to give the prescription back to the patient.

In speaking out about her experience, Peterson hopes to help other women who could encounter the same treatment.

“I just decided that I couldn’t remain silent,” Peterson said, “and if I could do something to prevent this from happening again then it was worth it in my mind.”