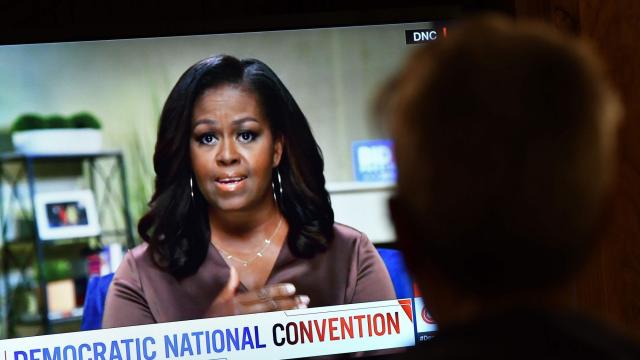 CNN — Former first lady Michelle Obama made her closing message to Americans in a campaign video released less than a month before Election Day, saying President Donald Trump and his allies are "stoking fears about Black and Brown Americans" to win an election and calling the President's actions "morally wrong" and "racist."

"But right now, the President and his allies are trying to tap into that frustration and distract from his breathtaking failures by giving folks someone to blame other than them," she said. "They're stoking fears about Black and Brown Americans, lying about how minorities will destroy the suburbs, whipping up violence and intimidation -- and they're pinning it all on what's been an overwhelmingly peaceful movement for racial solidarity."

"So what the President is doing is, once again, patently false. It's morally wrong and yes, it is racist. But that doesn't mean it won't work."

She called this American era a "difficult" and "confusing" time and warned that the President is good at using divisiveness, fear and "spreading lies" as tools to win as she made a plea for empathy as a Black woman.

"I want everyone who is still undecided to think about all those folks like me and my ancestors," she said, "the millions of folks who look like me and fought and died and toiled as slaves and soldiers and laborers to help build this country."

"Racism, fear, division, these are powerful weapons," Obama warned, "And they can destroy this nation if we don't deal with them head on."

The former first lady specifically addressed Black and Brown people in her message: "To all the young people out there, to all the Black and Brown folks, to anyone who feels frustrated and alienated by this whole system, I get it. I really do."

Obama implored voters, "Search your hearts, and your conscience, and then vote for Joe Biden like your lives depend on it."

Obama taped her message "a few weeks ago," a person familiar with the video tells CNN.

A person close to Obama said the video message, released as voting is already underway in a majority of states and registration deadlines loom every day, is the latest in a series of her attempts to explain how she believes her famous clarion call, "When they go low, we go high," fits in with the Trump era. It is intended to target a variety of audiences, including white suburban mothers (Republicans and Democrats alike) and young voters of color, among others.

"She is explaining what going high means -- above all, now that means voting," a person close to Obama tells CNN. While Obama talks frequently about her disdain for politics, aides note again how deeply personal this is, particularly how Trump led the attack against her family for years.

Acknowledging that politics "has never been my thing," Obama's message is reminiscent of her address to the Democratic National Convention, where she appealed to the conscience of Americans and warned, "If you think things cannot possibly get worse, trust me, they can; and they will if we don't make a change in this election."

In the new video, Obama hit the President hard on his "failure" to take the pandemic seriously. Capitalizing on the recorded audio from Trump's conversation with journalist Bob Woodward, the former first lady asked Americans to "look around the world" and compare the response to the pandemic in the United States against that in other countries.

"They had the same kind of resources to contain it as we did," she said. "But what they didn't have to contend with was this president."

Obama said the President is a man who "knew how deadly this virus is, but who lied to us, and told us it would just disappear" and "doubled down on division and resentment" and criticized Trump for flouting recommended public safety guidelines and holding events without requiring masks or social distancing.

"And yet, even in the face of all this incompetence, Americans keep digging deeper, finding new reserves of strength, doing whatever it takes to get through this," Obama said.

Obama urged Americans to make a plan to vote as she makes a pitch for Biden on personal terms, arguing that if the nation wants to regain "any kind of stability" every eligible voter must be engaged. The former first lady does not hold back in her criticism of the President Donald Trump, slamming him for his "incompetence" in his pandemic response and for stoking fear and racism to divide the country.

The former first lady made the case for Biden as someone who stands in stark contrast to the President and who has lived a life "guided by values and principles that mirror ones that most Americans can recognize." She argued that he is the right leader to get the pandemic under control and to deliver affordable health care and address racial injustice and the climate crisis. Obama made clear directly that the fate of the Supreme Court hangs in the balance and said that Biden would name justices "who follow in the footsteps of Ruth Bader Ginsburg."

Obama made a direct appeal to women, drawing on her experience as a mother to make the case that the President's leadership is not creating a safe environment for families and children.

"Everybody wants their kids back in school as soon as it's safe," she said. "But as a mom, it is frightening, thinking about all of these young people -- who were just our babies yesterday -- quarantined alone in dorms or apartments with little or no support as the disease continues to spread, unable to come home if their symptoms get worse. Just imagine the toll that worry is taking on families across this country."