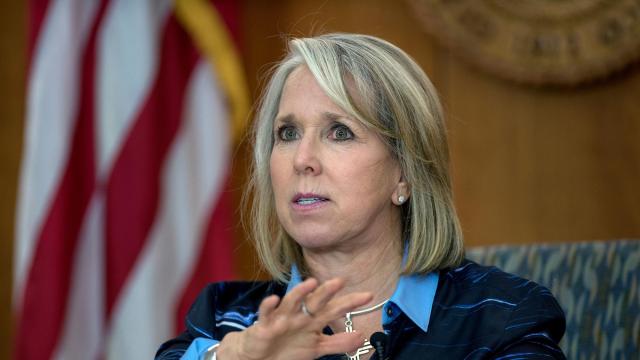 CNN — New Mexico Gov. Michelle Lujan Grisham is the leading contender to lead the Department of Health and Human Services, people familiar with the matter tell CNN, and is expected to be nominated for one of the most critical roles in President-elect Joe Biden's Cabinet.

An announcement could be made as soon as next week, officials say, although the timing of the decision is also contingent on the naming of other positions. A transition spokeswoman declined to comment.

The secretary of Health and Human Services will play a central role in the coronavirus pandemic, which elevated her in the eye of the Biden transition given her experience leading New Mexico's fight.

While Biden has faced considerable pressure to nominate Lujan Grisham to become Health and Human Services secretary, a Biden adviser said her credentials put her atop the list to run the sprawling agency -- long before the public lobbying campaign began. She has served as a state health secretary in New Mexico, a member of Congress and governor.

"She understands the levers of government, she understands politics and understands how to run a big bureaucracy like HHS," a former official at the Health and Human Services Department tells CNN, adding that Lujan Grisham is the most qualified candidate in the field of contenders.

Members of the Congressional Hispanic Caucus have publicly pushed Biden to pick Lujan Grisham, sending a letter to Biden's transition team lobbying for her selection.

Lujan Grisham was also among the candidates vetted by the Biden campaign over the summer during the vice presidential search.

She was driven to focus on health care because her sister, Kimberly, was diagnosed with a brain tumor when she was 2 years old and died of the disease nearly two decades later at 21. Lujan Grisham's husband, Gregory Grisham, also died of a brain aneurysm in 2004.

Lujan Grisham has said her experiences with her sister and the subsequent debt her family was saddled with due to her illness and treatment has "inspired" her to dedicate her life to improve affordable health care.

Dr. Vivek Murthy, a key adviser to Biden on coronavirus and a former surgeon general, has fallen out of contention for the HHS secretary role, people familiar with the matter say. He has expressed interest in leading the Centers for Disease Control and Prevention, which is not a Senate-confirmed position.

In 2014, Murthy faced a brutal confirmation battle to become surgeon general, largely over comments he made on gun control. His confirmation languished for months, with three Democrats ultimately voting against him, including Sen. Joe Manchin, a West Virginia Democrat. The other two, Heidi Heitkamp of North Dakota and Joe Donnelly of Indiana, have since been defeated.

Dr. Nicole Lurie, who also has been advising the Biden campaign, is also seen as a candidate to lead the CDC, people familiar with the matter say.

If Lujan Grisham is selected and confirmed as HHS secretary, she would lead the agency's response to the coronavirus pandemic and would inherit the Trump administration's plans to distribute the coronavirus vaccine, which are poised to begin this month.

Shortly after its conception, members of Biden's newly appointed coronavirus task force reached out to health groups and medical experts on how to create a "top-down" vaccine distribution plan that would put the federal government in charge, rather than the states. But these experts fear any disruption to the program after it's begun could create widespread chaos and ultimately impact hundreds of thousands of people.

Biden's transition team has reached out to state officials across the country, asking what the new administration could do to provide a better coronavirus response.

Some states expressed concern about dwindling personal protective equipment, while others focused on what exactly the vaccine distribution plan would look like. According to several officials, the Biden team has said ramping up testing remains is one of their immediate priorities.

According to sources in at least two of these conversations, officials discussed what a national Covid response would look like, with the Biden team expressing interest in the idea.

While the Trump administration has been criticized for its lack of a cohesive federal response to the coronavirus, multiple state officials fear it's now too late to change course and try to implement any kind of countrywide strategy. Many states have finally figured out how to work with their local jurisdictions on implementing their response, and they are concerned to a dramatic change would be time consuming and ineffective.