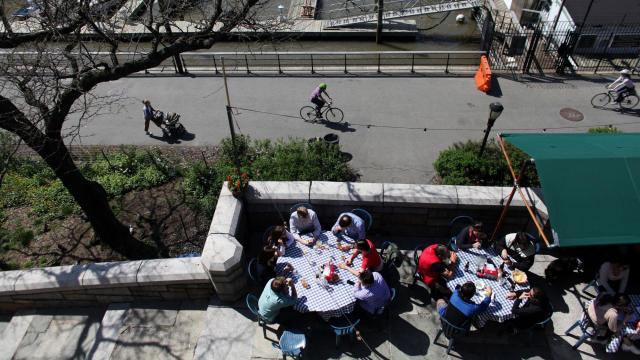 Michael O’Neal, a civic-minded New York restaurateur who, with his actor brother, Patrick, upgraded the emblematic Irish bar into an American bistro that beckoned singles and celebrities, died Nov. 12 in Manhattan, where he was an owner of a number of its well-known eating establishments. He was 82.

His wife, Christine Covey O’Neal, said the cause was multiple myeloma.

The O’Neal brothers owned two destination restaurants near Lincoln Center: the Ginger Man, whose name was inspired by J.P. Donleavy’s lusty novel and play about a roguish barfly, being portrayed off-Broadway at the time by Patrick; and O’Neal’s Baloon, distinguished by its enclosed sidewalk cafe and its enigmatic name (an imaginative spelling to comply with an obscure state Liquor Authority ban on the word saloon). It was immortalized as the place where Woody Allen and Diane Keaton meet for their last lunch in the 1977 movie “Annie Hall.”

The brothers also owned the Landmark Tavern, which bills itself as one of the oldest continually operating establishments in New York City, on 11th Avenue and West 46th Street in Midtown.

In a 60-year career, Michael O’Neal ran a dozen more Manhattan restaurants as well, among them the Boat Basin Cafe, along the Hudson River on the western end of 79th Street, and the Ballfields Cafe, a popular spot south of the Sheep Meadow in Central Park.

The O’Neal brothers were in the vanguard of an Upper West Side revival sparked by the construction of Lincoln Center for the Performing Arts in the early 1960s. Melding the ambience of P.J. Clarke’s, an authentic 19th-century Irish saloon on the East Side, with that of the original Friday’s, the prototypical Upper East Side singles bar, they opened the Ginger Man during those years in a former garage on West 64th Street. (It was renting at the time for $465 a month, about $3,800 in today’s dollars.)

Michael O’Neal closed the Ginger Man in 1992, filing for bankruptcy protection. He reopened it three months later under the name O’Neal’s, which continued to operate until 2010.

More than a businessman, Michael O’Neal was also an independent-minded leader of state and national restaurant owners’ associations. In one episode he bucked his fellow restaurateurs to support New York City’s ban on smoking in restaurants and bars, imposed by Mayor Michael R. Bloomberg in 2003.

O’Neal was a beloved neighborhood figure. He cooked Thanksgiving meals for the elderly through Project Find at the Church of St. Paul the Apostle on West 59th Street; served on the boards of the Riverside Park Conservancy, the concert venue Symphony Space and the Westside Crime Prevention Program; and accommodated his employees with flexible shifts so that they could also work as performers or attend school.

After graduating from Emory University in Atlanta in 1958 with a bachelor’s degree in business, he was a food service officer in the Air Force for five years before joining his brother in New York.

In addition to his wife, a real estate broker whom he met at the bar of the Ginger Man and married on St. Patrick’s Day in 1967, O’Neal is survived by their children, Georgia Covey O’Neal and Coke Wisdom O’Neal II, and three grandchildren. Patrick O’Neal died in 1994.

Christine and Michael O’Neal lived at the massive and historic Apthorp building on West End Avenue in an apartment that was so spacious, a friend told The New York Times in 2009, “they take in strays.”

After the O’Neals noticed a lack of restaurants in their neighborhood and decided to open one, Michael, who was already training with Restaurant Associates, enrolled in a cooking school run by Dione Lucas, a celebrated English chef in New York who had studied at Le Cordon Bleu in Paris. “Mike was originally from the part of the country that throws the green beans in a pot with a piece of fatback in the morning, then lets them cook all day,” Patrick O’Neal’s wife, the actress Cynthia O’Neal, wrote in “Talk Softly: A Memoir” (2010).

Lucas was the Ginger Man’s original chef. The New York Times restaurant critic Craig Claiborne wrote in a review that her omelets “rank with the best in the city” and praised her “gossamer” chocolate roll dessert.

“Such a restaurant in an area that is generally impoverished gastronomically,” he added, “is a revelation if not a revolution.” (Another restaurant called The Ginger Man, on East 36th Street, has no connection to the O’Neals.)

In 2007, O’Neal won a Silver Spoon Award from Food Arts magazine for having “transformed the chophouse into a genre now in full, ever-blooming flower — the American bistro.”