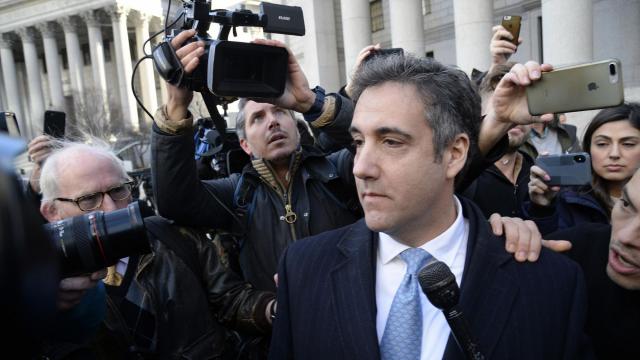 Cohen, 52, is to be sentenced in Manhattan next week for two separate guilty pleas: one for campaign finance violations and financial crimes charged by federal prosecutors in Manhattan, and the other for lying to Congress in the Russia inquiry, filed by the Office of the Special Counsel in Washington.

Prosecutors in Manhattan said the crimes Cohen had committed “marked a pattern of deception that permeated his professional life,” and though he was seeking a reduced sentence for providing assistance to the government, he did not deserve much leniency.

“He was motivated to do so by personal greed, and repeatedly used his power and influence for deceptive ends,” the prosecutors said in a lengthy memo to Judge William H. Pauley III.

At the same time, the special counsel’s office released its own sentencing recommendation to the judge for Cohen’s guilty plea for misleading Congress.

Cohen has emerged as one of the biggest threats to Trump’s presidency, providing the special counsel’s office and prosecutors in Manhattan with material in dozens of hours of interviews. Robert Mueller, the special counsel, has been investigating Russian interference in the 2016 election and potential ties to the Trump campaign.

On Tuesday, Mueller asked a judge in Washington to impose little or no prison time on Michael T. Flynn, Trump’s first national security adviser, saying he had provided substantial assistance to his office’s Russia investigation. Flynn faces up to six months in prison under federal guidelines after pleading guilty to one count of lying to the FBI.

In the Manhattan plea in August, Cohen implicated Trump in hush-money payments to two women — Stormy Daniels, an adult-film actress whose legal name is Stephanie Clifford, and Karen McDougal, a former Playboy model — to conceal affairs they said they had with Trump.

On Nov. 29, Cohen entered his second plea, revealing in court that Trump had been more involved in discussions over a potential deal to build a tower in Moscow than was previously known. He also said those discussions had continued until June 2016, well after Trump had clinched the Republican nomination and only five months before the election.

Trump’s interest in building a Trump Tower Moscow led Cohen to make numerous inquiries with Russian officials and other Kremlin-linked figures about the feasibility of the project, raising the possibility that the negotiations might have given the Russians leverage over Trump when he was running for president.

In Cohen’s own sentencing memo, his lawyers disclosed that their client had consulted with White House staff members and Trump’s “legal counsel” — without identifying the lawyer — as he prepared for his false congressional testimony.

Cohen said in court that he lied “out of loyalty” to Trump and to be consistent with his “political messaging.”

Cohen’s cases have been consolidated before Pauley in Manhattan.

Cohen’s lawyers, Guy Petrillo and Amy Lester, have asked Pauley to allow Cohen to avoid a prison sentence, citing his cooperation with Mueller even though he never signed a formal cooperation agreement.

They also portrayed him as a remorseful man whose life had been shattered by his relationship with Trump. They said Cohen had lost friends and professional relationships and wanted to confess his crimes, serve any sentence imposed and begin his life anew.

Under federal guidelines, Cohen faces about four to five years in the Manhattan case and up to six months in Mueller’s case. But the guidelines are not binding, and Pauley will decide the final sentence.