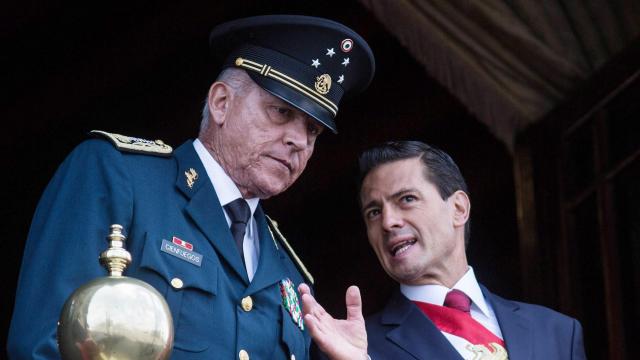 CNN — A former Mexican defense minister was arrested at Los Angeles International Airport on drug and money laundering charges, accused of taking bribes in exchange for permitting a cartel known for wholesale violence to operate with impunity in Mexico, federal prosecutors said Friday.

General Salvador Cienfuegos Zepeda, Secretary of National Defense in Mexico from 2012 to 2018, has been indicted on four counts, including international heroin, cocaine, methamphetamine and marijuana manufacture and distribution conspiracy, importation and distribution conspiracies, and conspiracy to launder narcotics proceeds, according to the US Attorney's Office for the Eastern District of New York.

Federal prosecutors said Cienfuegos Zepeda allegedly assisted the H-2 cartel, which was previously led by the late Juan Francisco Patron Sanchez, also known as "H-2," and based in Nayarit and Sinaloa, Mexico.

"The defendant abused that public position to help the H-2 Cartel, an extremely violent Mexican drug trafficking organization, traffic thousands of kilograms of cocaine, heroin, methamphetamine and marijuana into the United States, including New York City," federal prosecutors said in a letter supporting a motion for a permanent order of detention against the defendant.

"In exchange for bribe payments, he permitted the H-2 Cartel — a cartel that routinely engaged in wholesale violence, including torture and murder — to operate with impunity in Mexico."

Foreign Minister Marcelo Ebrard said on Twitter Thursday night that he was informed of the detention by US Ambassador to Mexico, Christopher Landau.

The general was to appear in a US court later Friday and was expected to be transferred to New York.

"It is a very regrettable fact that a former defense secretary is detained, accused of drug trafficking," Mexico's President Andrés Manuel López Obrador, commonly known as AMLO, said during his daily press briefing on Friday.

Falko Ernst, a Mexico-based security analyst for the Crisis Group, said the arrest was "a very stark reminder that the incorruptibility of the armed forces -- the myth that they're somehow protagonists of the 'war on drugs' and simultaneously uncompromised by it -- has little to do with on-the-ground realities."

"It is also a reminder that there is no such thing as a clear line between state and crime, which undermines the very notion that this is a winnable war with clear enemy categories," Ernst said via WhatsApp Friday. "It should thus remind us how badly needed new, and better solutions that go beyond force alone are. The current approach - -ever-greater militarization -- has failed dramatically."

Cienfuegos Zepeda was Mexico's defense minister from 2012 to 2018. He served under President Enrique Peña Nieto, who left office two years ago.

Cienfuegos Zepeda's detention comes less than a year after the US arrest of Mexico's former public security secretary, Genaro Garcia Luna, who held the post from 2006 to 2012.

Garcia Luna, who was arrested by federal agents in Dallas, Texas, last December, was charged in a drug trafficking conspiracy that involved receiving millions of dollars in bribes from imprisoned drug cartel kingpin Joaquin "El Chapo" Guzman, according to federal prosecutors. Garcia Luna has pleaded not guilty to the charges.

AMLO defended the armed forces, calling them "incorruptible" and "pillars of the Mexican state" while blaming former administrations of what he called the "neoliberal period" when tens of thousands of Mexicans were killed in drug-related violence and cartel warfare.

CORRECTION: An earlier version of this story misspelled the name of the former defense minister General Salvador Cienfuegos Zepeda.