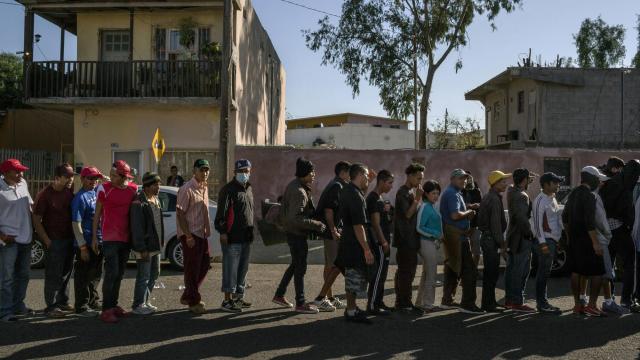 MEXICO CITY — Leaders of the incoming Mexican government are in talks with U.S. officials to allow migrants applying for asylum in the United States to remain in Mexico while they await a decision, U.S. and Mexican officials said Saturday.

While these officials said no decision has been made, leaders of the incoming Mexican government are under immense pressure to deal with thousands of migrants lined up along the border between the two countries. The top Mexican officials plan to meet as early as Sunday to discuss the proposal, according to the foreign minister-elect, Marcelo Ebrard, who will take office Dec. 1.

A decision to allow the migrants to stay in Mexico while awaiting word from the U.S. courts would be a sharp reversal of the current policy, which allows asylum-seekers to remain in the United States until their petition is resolved.

Over the last several months, the number of migrants at the border has surged as Central Americans and others fleeing violence and poverty are trapped in a processing bottleneck with U.S. border officials. As thousands await entry to begin the asylum-seeking process, migrant shelters and local and state resources in Mexico have been overwhelmed.

Discussions have been ongoing for several months on how to deal with the backlog. Ebrard said Saturday that no decision had been reached about how to manage the crowds of migrants along the border.

The issue has become more urgent in recent weeks as the number of migrants at certain border crossings has risen sharply. Many have traveled in caravan-style groups of a few thousand.

In the past two weeks alone, some 5,000 migrants, mostly from Central America, have arrived in the northern Mexican border city of Tijuana. Officials say they expect at least another 1,500 to arrive in the coming days, some traveling in other caravans making their way north through Mexico.

While many are economic migrants, fleeing poverty in their homeland, hundreds — if not more — said they intended to apply for asylum in the United States.

On Friday, the mayor of Tijuana, Juan Manuel Gastelum, declared a humanitarian crisis in the city and said he would request assistance from the United Nations to ease the burden of sheltering, feeding and clothing the migrants.

According to a U.S. official with knowledge of the proposal, migrants would come to the U.S. ports of entry to apply for asylum and have their interviews. If they can establish a credible fear of returning to their home countries, they would be given a court date and then return to Mexico to await that date.

But because of the backlog in the immigration courts — about 1 million cases — these individuals would most likely wait for years in Mexico.

“What exists is a conversation about what do to with 9,000 people that are going to remain in Tijuana for a year,” said Ebrard, who acknowledged the discussions were ongoing. “What we are trying to think about is how to organize this, but we still have not found the response.”

Assistant U.S. Secretary of State Kimberly Breier said Saturday: “Our engagement with Mexico is, first and foremost, based on mutual respect and on a commitment to work together to find creative solutions to our shared challenges. We continue to work closely with both the current and incoming Mexican governments on issues across the bilateral relationship, including illegal migration.”

Sunday’s meeting is to include Ebrard; incoming Interior Minister Olga Sanchez Cordero, and other top officials in the government of President-elect Andres Manuel Lopez Obrador.

News of the proposal was first reported by The Washington Post, which quoted Sanchez Cordero as saying an agreement between the United States and the incoming Mexican government had been reached. But later Saturday, Sanchez Cordero issued a statement saying there was no decision regarding the use of Mexico as a holding area for asylum applicants to the United States.

The Trump administration, eager to lower migration numbers and ease the burden on the U.S. asylum system, had suggested turning Mexico into a “safe third country,” which would require migrants who pass through there with the intention of applying for asylum in the United States to petition for sanctuary in Mexico instead. But the outgoing administration of President Enrique Peña Nieto has resisted, as has its successor.

“We still do not have a specific proposal from the United States,” Ebrard said. “We are still against the safe third country, but this theme is something distinct and because of that, we are analyzing it with care.”

The plan under consideration would differ from the safe third country status, but ultimately it would mean many thousands more migrants remaining in Mexico while the United States processes them.

Currently, migrants who can establish a credible fear of returning to their home countries are processed and released by the Department of Homeland Security pending a court date. The Trump administration has reviled this as a “catch and release” policy that encourages migrants to make the journey to the United States knowing that they will not be detained.

The number of people traveling in families in recent months has surged, frustrating President Donald Trump, who made reducing illegal immigration a key plank of his 2016 election campaign. Last month, the number of people in families caught at the border exceeded 23,000, a record. In September, nearly 16,658 people in families were apprehended at the border, prompting the Trump administration to label the increase in migrants an unprecedented crisis and national security threat.

Frustrated by the rise in migrant families, in April the administration began a “zero tolerance” policy, criminally prosecuting anyone who crossed the border illegally.

The enforcement of the policy led to the separation of nearly 3,000 children from their parents, setting off weeks of national protests, with Democrats and many Republicans calling on Trump to rescind the policy. He eventually relented and moved to halt the family separations, though the government struggled in some cases to reunite those it had already separated.

Even before the migrants began to arrive in Tijuana in mid-November, the border city, long a major migratory gateway to the United States, was already under stress.

Because of a bottleneck in asylum processing at the U.S. border crossings there, some 2,800 migrants were already in the city, waiting their turn to apply for refuge in the United States, with many of them filling Tijuana’s migrant shelters. Wait times for some have stretched as long as two months.

The Mexican asylum system is already overwhelmed by the growing numbers of immigrants who have sought sanctuary in recent years, and advocates contend that Mexico remains a dangerous place for migrants in transit or seeking to stay.