Mexico is surviving Year 1 of Trump 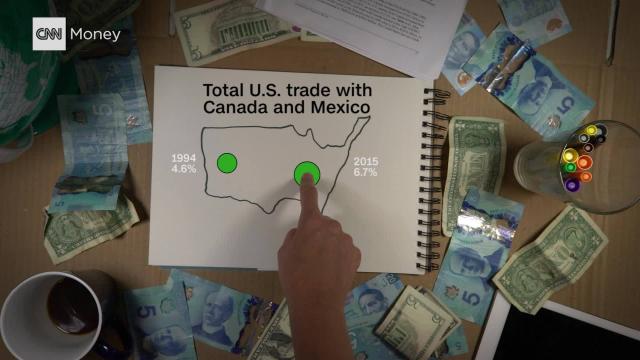 But a year later, Mexico has withstood major concerns that its economy would collapse and it's continued to grow.

"It was a lot more resilient than expected," says Alberto Ramos, head of Latin America research at Goldman Sachs. "That doesn't mean the economy is out of the woods though."

On Tuesday, Mexico's statistics agency said the economy grew 1.7% between July and September at an annual rate. A devastating earthquake in September that killed over 300 people likely held back growth, economists say.

No doubt, other major challenges lie ahead for the Mexican economy, including a presidential election next July and the ongoing renegotiation of NAFTA, the three nation trade pact between Canada, the United States and Mexico. But its progress this year defied major threats from Washington.

During and after his campaign, Trump threatened to slap tariffs on products made in Mexico. About 80% of Mexican exports go the U.S., making trade a key ingredient to its economy.

Even today, Trump threatens to pull out of NAFTA. Exiting it would carry consequences for Mexico, Canada and the United States, but many experts say Mexico would get hit hardest.

Still, Mexico's economy is moving forward. The peso is up 7% against the dollar this year, though it lost some gains in recent weeks as NAFTA talks soured.

The stock market is also up 7% so far this year. The economy is on pace to grow about 2%, roughly on par with U.S. growth. Real wages are expected to pick up in the coming months as inflation cools down. Remittances, a key source of income for low-income Mexicans, are on pace for another all-time record.

The election may be Mexico's biggest concern. The front runner, Andres Manuel Lopez Obrador, is a populist candidate who promises to get tough on trade with Trump. That rhetoric has stoked some fears in the business community. A decline in oil production has also slowed down overall economic growth this year.

But so far, fears over the fate of Mexico's economy haven't become a reality.

"There may be problems down the road, but the initial doom and gloom was a bit overdone," says Neil Shearing, chief emerging markets economist at Capital Economics. "The economy didn't collapse in the way that perhaps others expected."