Message from woman orphaned in crash: Hang up and drive

Raleigh, N.C. — A young woman orphaned in a crash caused by a distracted driver brought her story Monday to Green Hope High School in hopes of influencing teen drivers to follow her urging: Hang up and drive.

"Driving a car, you need your brain, and the phone kind of gets in the way of doing the thing you are supposed to be doing," said Jacy Good.

She and her parents were on the road home from her college graduation when the crash happened that changed her life and her mission. She recounted the crash again Monday, in front of an auditorium full of new or soon-to-be new drivers.

"The road is really simple: one lane in each direction, 45 miles an hour," she said.

"We are going south and have a green light, and an 18-wheeler is going north, and he has a green light. On the intersecting road, there was a young man talking on his cell phone. He's got a red light. He stopped at the red light, but then – that brain thing – he wasn't paying attention. He turned left, the semi swerved to miss him, and then that truck hit my family's car."

Good suffered a brain injury, and both her mother and father died. Since that time, for 10 years, she's traveled across the country to share her story in hopes of saving the lives of others. 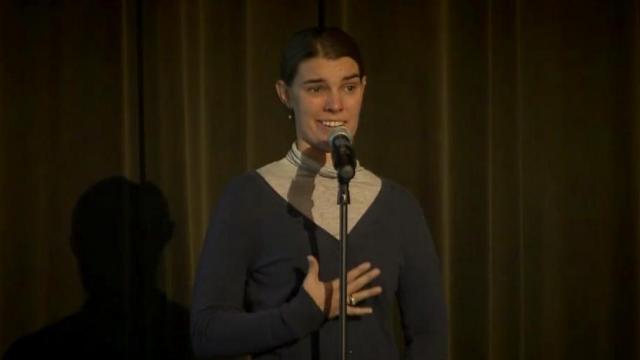 "We have the power to change the world, and we need to take advantage of that.," she said. "I can say with a good degree of certainty that I am making a difference."

But Good knows she still has a long road ahead of her.

"I will never get over it," she said. "My parents should still be here. That phone was not more important than their lives. As long as people are still dying on our roads, because of these selfish choices that we make, I can't stop telling my story, because we need to make a change."