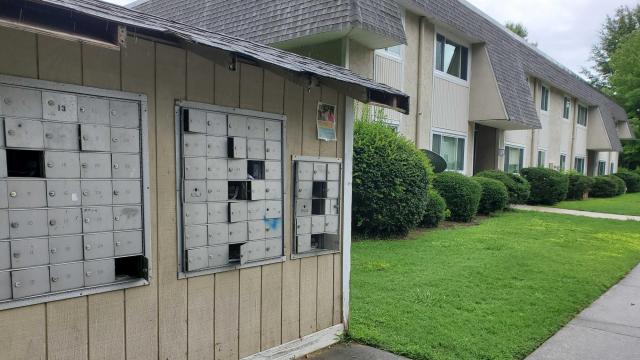 On a hot morning in mid-July, Natacia Doolin stood outside the padlocked front door of her deteriorating unit at South Pointe Apartments in Greensboro with her husband, their two children and pretty much everything they owned, waiting to find out if her family would find another place to live.

A few days earlier, Doolin had been told they would need to vacate the apartment, which they found through a housing program connected to a mental health provider.

“All day long in the heat,” Doolin said of the wait, as local housing advocates like Partners Ending Homelessness and the Greensboro Housing Coalition scrambled to find space in hotels or shelters. “It was bad. I ain’t gonna sugarcoat it.”

The Doolins are among more than a dozen families who were ripped from their homes in the middle of the pandemic.

But this story is about more than just them. Leaders of the organization that housed them stand accused of offering subsidized housing to homeless people on the condition that they would attend classes that could be billed to Medicaid. In a two-year span alone, that organization received more than $16 million from Medicaid.

According to interviews, court documents, witness testimony and health investigations, it worked like this: United Youth Care Services and United Youth Care Foundation, both led by CEO Donald Booker, offered to sublet apartment units to people like the Doolins through oral — not written — agreements, but only if those tenants agreed to receive health care services and drug screenings from the organization. That allowed United Youth Care Services to bill Medicaid for mental health and drug abuse services, as well as laboratory services including drug screenings.

“To be truthful, it felt like these families had been, frankly, victims … almost of abuse,” said Brian Haan, executive director of Partners Ending Homelessness.

An investigation by the North Carolina Department of Health and Human Services concluded that United Youth Care Services put clients in substandard housing, and failed to give them adequate medical care to the point that their clinical needs were neglected.

These findings are outlined in a ruling from the North Carolina Office of Administrative Hearings by Administrative Law Judge Donald Overby. On Sept. 2, he upheld a decision by DHHS to revoke United Youth Care Services’ license to provide mental and behavioral health services.

The judge put it bluntly: “(United Youth Care Services) subjected clients to exploitation,” Overby wrote in his ruling. “The CEO/President was responsible for and paid for substandard housing in various locations ... UYCS used clients with mental health and substance abuse diagnoses to make their housing contingent on the facility obtaining Medicaid reimbursements for services provided by UYCS. There was a threat of losing housing if not in treatment.”

But while it was fighting to keep its license, and unbeknownst to the Doolins and dozens of other clients, United Youth Care Services had stopped paying rent to the apartment complexes where its clients stayed. The Doolins’ unit was one of 22, according to court records and accounts from housing advocates, that were ultimately evicted, even though they had no idea that eviction proceedings had started. While evictions were actually delayed during the pandemic, residents said they were caught off guard when the moratorium ended.

Doolin said United Youth Care Services did not tell her she would be evicted until the week it happened. And because she was not listed as the tenant, she had no standing to challenge the eviction in court.

“I would not wish what we went through on our worst enemy,” Natacia Doolin said.

Booker has denied wrongdoing, and his attorney, Knicole Emanuel, said she plans to appeal the decision. Emanuel is a partner at the law firm Practus, where she specializes in Medicare and Medicaid law. 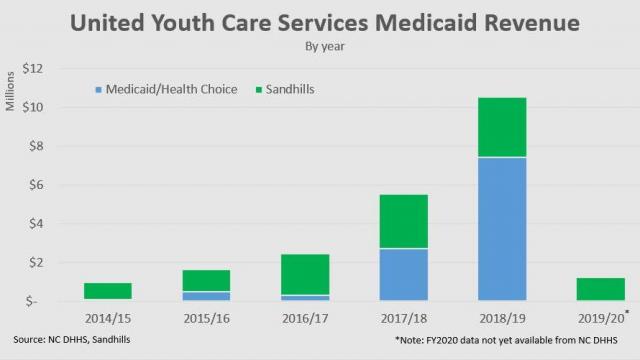 This kind of model can make sense, according to advocates, as many people who suffer from mental health diagnoses also suffer from housing insecurity.

Booker said in an interview that the growth was due to marketing.

But investigators found there was more at play.

Surveyors with the state Department of Health and Human Services described a system in which United Youth Care Services staff would single out people who were homeless and who qualified for Medicaid, then offer them housing, but only on the condition that they attended classes.

For example, a sign was posted inside one residence that read: “Attention: if you’re not attending class daily, rent is $350, no exceptions,” according to the OAH ruling.

But Doolin, the woman whose family was evicted from South Pointe Apartments, said she had to pay $400 every month regardless of whether she attended. She said she kept making payments, even after UYCS stopped paying rent to the apartment complex.

UYCS’s revenue growth coincided with a dramatic increase in clients, visits and procedures. In fiscal year 2017, UYCS billed for just 2,150 procedures and 348 clients. Two years later, those figures jumped to 56,173 procedures and 1,905 clients, according to Medicaid payment data.

UYCS had tax issues as well. The OAH ruling showed Booker believed United Youth Care Services was a nonprofit and exempt from federal taxes. This was incorrect, and in fact, UYCS has had tax liens against it totalling more than $600,000.

Booker said he was on a payment plan with the federal government. 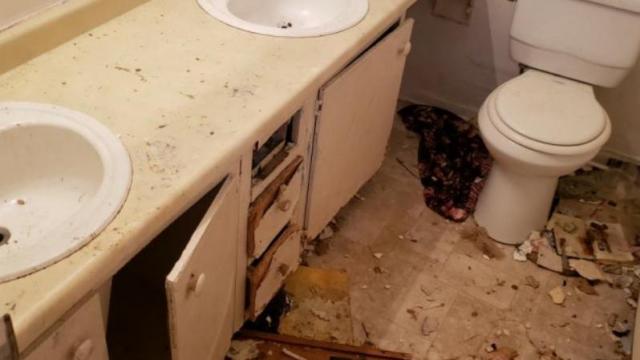 DHHS investigators also found that the housing was inadequate and that clients' clinical needs were not being met.

Advocates said clients of UYCS were often placed in small one- and two-bedroom apartments with another family. Some of these units didn’t have working electricity or running water, according to advocates. Others had serious mold issues. And often, the clients told housing advocates, they would be moved around, sometimes staying only weeks at a time in a specific unit.

Booker acknowledged cramped living quarters, but argued that the organization had limited resources and was trying to help as many people as possible, including single mothers with multiple children and no income.

Michelle Kennedy is the executive director of Interactive Resource Center, a day center for people experiencing homelessness, and also a member of the Greensboro City Council. At the hearing, she testified that she inspected the housing and determined it to be “substandard in her opinion,” according to the OAH ruling.

State health regulators found that clinical programs offered by UYCS were also deficient. DHHS investigators noted that clinical staff did not have the proper training, “yet continued to provide services to clinically fragile dual-diagnosed clients.”

“Treatment plans were not followed so clients’ treatment needs, medical needs, medication management and psychiatric evaluations were not being completed or known, therefore, clients’ clinical needs were neglected,” their report said.

Under North Carolina Administrative Code, organizations that appeal accusations of misconduct can keep their licenses until an administrative judge issues a final ruling. On Sept. 14, Emanuel, Booker’s attorney, told the NC Watchdog Reporting Network that Booker and UYCS did nothing wrong and that they plan to appeal. 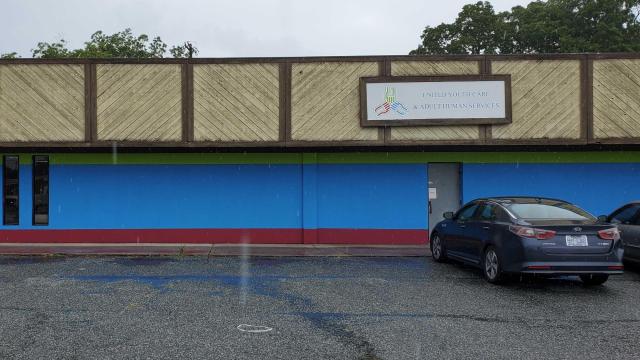 Booker himself has denied any wrongdoing.

He said he wanted to offer mental health and addiction services to needy people in the area. By 2009, after being in business for five years, he said he realized that many people suffering from mental illness and drug addiction also suffered from housing insecurity. That’s why, he said, he formed the nonprofit to help find housing. He said the funding for United Youth Care Foundation came almost exclusively from profits from United Youth Care Services.

"We were housing a lot of homeless people,” he said. “I was damn near going broke trying to help everybody that came down here and said they need help.”

Just hours before the OAH ruled against him on Sept. 2, Booker spoke with NC Watchdog Reporting Network for more than an hour.

He painted a much different picture of himself and United Youth Care Services than the one in DHHS violation reports and court documents. His work, he said, has received recognition “for helping.”

"So the good definitely outweighs the bad. I mean, definitely,” he said.

Booker repeatedly turned blame on clients, the very people he purported to help, saying they often struggled with drug addiction and couldn’t be trusted to tell the truth.

“And so there's a few bad apples who complain.” he said. “You can expect that from this population. And I hate for the media or anybody else not to see this. I think we proved this without a shadow of a doubt."

In his ruling, Judge Overby found some client testimony questionable, though he did not dismiss all of it.

Booker could not be reached after the ruling, which upheld the DHHS Division of Health Service Regulation’s decision to fine United Youth Care Services a total of $56,000 and revoke its license. Emanuel, his attorney, was steadfast in her opinion that Overby erred in his ruling and said she was confident it would be overturned on appeal.

But even if the decision is upheld, it doesn’t put a roof over the heads of UYCS clients who were evicted.

Natacia Doolin, her husband and their two children are staying at a hotel room in Greensboro after being evicted from South Pointe Apartments, but it is only covered until Sept. 21. In the meantime, she is keeping an eye out for other housing opportunities.

“We struggled to get that in fear of being on the street,” she says. “And look what happened. We ended up on the street anyway.”

This story was jointly reported and edited by Frank Taylor of Carolina Public Press; Ames Alexander of The Charlotte Observer; Jordan Schrader of The News & Observer; Nick Ochsner of WBTV; Emily Featherston of WECT; Tyler Dukes of WRAL; and Jason deBruyn, Dave DeWitt and Will Michaels of WUNC.