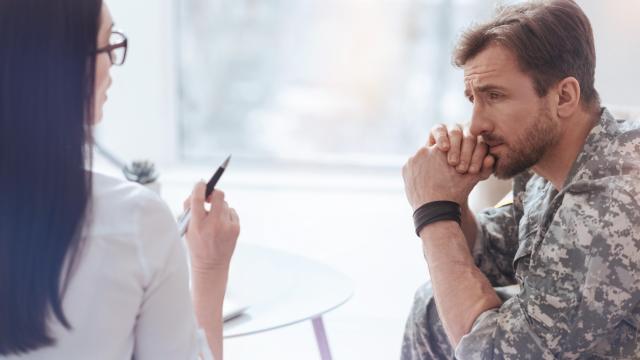 Joining the military is a noble profession that can bring pride and accomplishment to those that serve. It can also create an atmosphere of machismo where members fear admitting any mental health issues could create a perception of weakness that would hurt their careers.

"A lot of people — officers included — think that if they admit or seek treatment, it'll make them seem weak or unfit for the job," said Jennifer Rue, director of assessment at Triangle Springs. "I think there is still some of that stigma that is out there."

The stigma may exist, but the Substance Abuse and Mental Health Services Administration found that 18.5 percent of service members returning from Iraq or Afghanistan suffer from post-traumatic stress disorder.

With thousands of active duty military and millions of veterans, it's important for those suffering to seek care. Luckily, veterans have access to the United States Department of Veterans Affairs, but the number of veterans seeking care could lead to long wait times.

"Most [veterans] start with the VA," Rue said. "The VA is covered and free. The VA deals with this population all the time, so they're going to be a little more equipped. But they end up with a wait list, and you can't get seen sometimes for a month or two months."

If waiting isn't an option and symptoms are already visible or impacting day-to-day behavior, centers that offer mental health programs are a good option to explore. Most initial assessments are free at these types of treatment centers.

Transitioning out of active duty can be difficult, and it's not surprising to see individuals looking to illicit substances to cope. Whether it's alcohol consumption or harder drugs, substance abuse may start as just an attempt to alter their state of mind, but transition into addiction. According to Rue, common signs to look for include:

The VA found veterans suffering from PTSD are more likely to have a substance use disorder. And it isn't just marijuana or alcohol consumption anymore; benzodiazepines like Valium and Xanax can be lethal when combined with alcohol.

One significant change to look for in returning veterans is a desire to carry a weapon when they didn't carry before deployment. This is a red flag to watch for and something professionals take note of.

"That's something that has to be really screened for very carefully," Rue said. "We ask about it all the time."

Not only is the desire to carry a firearm because they are "used to it" unusual, veteran suicide rates involving firearms are statistically higher than non-veterans.

For concerned family members and friends, the best advice is to just be there for the individual suffering. Suicide is a preventable health concern that affects all individuals, but veterans and their families have a few avenues of recourse that aren't available to the general population.

"There are wellness checks that can be done," Rue said. "You can call any police department or, worst case scenario, you can call 911. Look at what's local, look at the Family Readiness Group. I would also say to just make yourself available; offer to spend some time with that person, use your house for keeping that weapon. It's not that military personnel want you to say you've been there, they just want you to be there and listen. Sometimes they just want to get out of the house, out of their head."

If you are a veteran or you know a veteran who is showing any of these signs, call the veterans crisis line at (800) 273-8255, chat online at VeteransCrisisLine.net/Chat or text 838255.