Mending Fences in the War Between Dingoes and Sheep 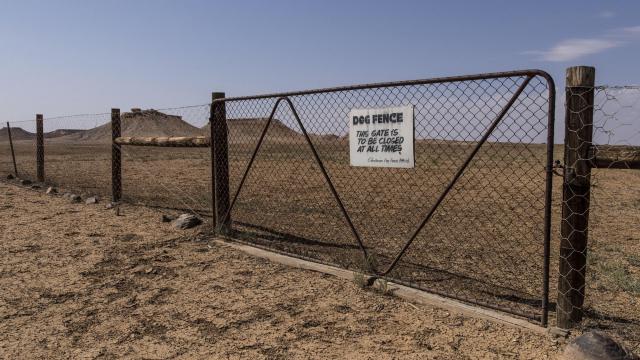 COOBER PEDY, Australia — Driving through South Australia’s outback, it does not take long to see why patrol officers like Alan Walton are needed to keep the country’s 3,500-mile long dingo fence in order.

Early into a recent workday, Walton watched as a kangaroo — perhaps driven by the potential for greener pastures or a mate on the other side — slammed full-throttle into the fence, bouncing off like a boxer hitting the ropes.

Within minutes, Walton, 54, crawled his pickup truck, known locally as a ute, past the battered section of the fence. This time, the barrier was not breached. Other times, Walton has had to patch holes in the wire, stabilize a post or untangle an offending kangaroo.

The idea of the dingo fence is simple: to keep feral dogs and dingoes on one side of the wire and vulnerable sheep farms on the other. First built by settlers in the 19th century, the fence has a storied presence in the outback.

The dingo fence, a network of wires and posts, runs from the southern coast to near the eastern coast in a squiggly line, almost twice the length of the U.S.-Mexico border. Some parts have stood for more than 100 years. But new research has raised questions about the fence’s environmental impact, and new technology has threatened to upend its traditional means of maintenance.

Fixing the fence in South Australia (it also crosses into the states of New South Wales and Queensland) falls to seven patrol officers. Each is responsible for a section that divides arid land, where humans rarely tread. Walton oversees a 200-mile stretch near Coober Pedy, an opal-mining town about nine hours north of Adelaide.

“They do a hell of a lot of damage,” Walton said of dingoes, the sandy-colored wild dogs native to the continent. “If you keep that in your mind, it’s probably the most important thing I do — protecting the people, their stock and their livelihood.”

The fence-fixing expedition with Walton started well before dawn on a dirt road that deteriorated the farther it got from the highway. He visits the fence two or three times a month, often camping in the bush with a swag, a hybrid of a tent and a sleeping bag.

“You will probably see a few areas where it looks like someone got bogged down here,” said Walton, before adding with pride, “It was me.” Once his ute was stuck in the mud for three days.

Out here, cellphone reception is nonexistent. Not long after he started as a patrol officer, almost three years ago, Walton bought a satellite phone. The bogging and a run-in with a poisonous snake, he said, had shown it to be a worthwhile investment.

Walton drove along the fence for hours, scanning for holes in the wire, or tunnels dug underneath it by dingoes. He looked across the expanse of his office, a desert so vast you might swear you could see the curvature of the earth. Breaking up the monotony, a mob of emus raced alongside the ute.

In South Australia, the battle against the dingo began in the late 1800s, when ranchers built the first dog-proof fences and patrols were done on camelback.

Over the decades, individual efforts morphed into a single fence in South Australia, which now costs about 1.3 million Australian dollars, or $1 million, a year to maintain. Even with the fence, dingoes and other wild dogs cost the agricultural industry about $65 million annually, according to the Center for Invasive Species Solutions. This damage is incurred both in and outside the fence and across a range of livestock.

“When you’re lambing, the dog just has to walk through the mob and upset the ewes,” said Richard Treloar, a sheep farmer with two properties protected by the fence. Last year, a few dingoes got through the fence and terrorized his ewes, causing them to abandon their young. He was left with 40 percent fewer lambs than the previous year.

Despite the fence’s economic benefits, scientists and conservationists are increasingly concerned about the impact of the dingoes’ absence from whole sections of the country. Without dingoes, feral cats and foxes have flourished, putting pressure on those animals’ smaller native prey, said Thomas Newsome, a dingo expert at the University of Sydney.

“The dingo fence is probably the most extreme length undertaken by any country in the world to exclude a predator from inhabiting or recolonizing areas where they once used to roam free,” Newsome said. The barrier also disrupts the migration of many animal species and genetically isolates their populations.

Researchers are looking for faster and less invasive ways to maintain the fences. In 2016 the University of Adelaide tested using drones in place of patrollers. In addition to repairing the fence, Walton dropped poisoned bait every few miles along the wire. In case he spots a dog on the wrong side of the barrier, he carries a rifle.

The job may seem mundane or lonely, but Walton described it as a dream come true.

“I think it takes a certain person to do it, but the guys that do it tend to love it,” Michael Balharry, executive officer of the Dog Fence Board, said of the patrollers. Contracts are competitive, and patrollers stay in the post for years. The person Walton replaced was more than 70 and did the job for four decades, Balharry said.

Walton is just happy to be part of a long line of dingo fence patrollers. “It’s an amazing fence,” he said. “I suppose when I retire, it will be nice to look back and say ‘I did that.'”