Megan Abbott’s Work Diary: ‘My Psychiatrist Notes How Tired I Look, Which Is Great’ 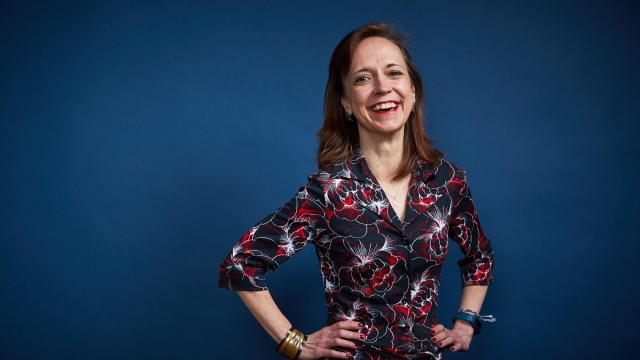 The villains in Megan Abbott’s twisted crime novels are often combative, hypercompetitive women and girls: elite cheerleaders; perfectionist gymnasts and their drill-sergeant moms; a cunning crime boss and her backstabbing, power-hungry underling. Abbott’s most recent novel, “Give Me Your Hand,” features rival postdoctoral researchers who are studying “premenstrual dysphoric disorder,” a particularly nasty form of PMS that can cause explosive anger.

In interviews, Abbott herself comes across as effusive, sunny and self-deprecating, not at all sociopathic or prone to murderous rage. But she clearly knows something about ambition, and its dark side.

“We’re all really like that, on a continuum,” she told me. “I’m always surprised at the negative response to the women in my books who are openly ambitious or experience aggression.”

Lately, the world has finally caught up to Abbott. At a moment when stories about female rage are all the rage, she has become a star in the publishing industry — alongside blockbuster suspense writers like Gillian Flynn and Liane Moriarty — and now she’s making her mark in TV.

Four of her nine novels are being developed into series: “Give Me Your Hand,” “You Will Know Me,” “Queenpin” and “Dare Me.” For “Dare Me,” about ruthless members of a cheer squad and the basis for a potential series on USA Network, Abbott is also working as a showrunner, a writer and an executive producer on the pilot.

Abbott, 47, is still adjusting to the dueling demands of writing novels — work that requires focus and solitude and affords her total creative control — and producing TV, a collaborative medium where she has to not only shape characters and plots but also convince network executives of commercial viability.

“I’ve had to draw on whatever percentage of extrovert I have in me,” she said, “which is a quite small percentage.” She drew on her entire reserve for a recent work trip to Los Angeles.

6:30 a.m. Wake up to WNYC: harrowing headlines. Oatmeal, coffee, sorting laundry. Because my big workload today involves working with the editor who’s making final changes to the “Dare Me” pilot, my morning goal is to try to get as much practical stuff done as possible before the Pacific-time workday begins. We’re nearing the end of our postproduction stage, completing final changes.

8 a.m. Coffee wearing off. First Diet Coke of the day.

9 a.m. Going over last-minute music/score changes in the pilot thanks to the magic of PIX video software — all stuff I’m figuring out, having never done this before.

10 a.m. For the next few hours, I try to go through all the network notes we’re trying to address in this final pass of our pilot. At 10:30, I hear from Gina Fattore, my co-writer/showrunner, having her morning coffee on the West Coast. We make a plan for the day and prioritize the changes we want to make to hit our Tuesday deadline. Second Diet Coke of the day.

1 p.m. I head off to Manhattan for an appointment with my psychiatrist. The subway (except rush hour) is my favorite time because I get so much reading done — in this case, a Gloria Swanson biography. Exiting the subway at 57th, I bump into Adam Sternbergh, a novelist pal, with his daughter. We briefly compare notes on trying to write fiction while the country self-immolates.

When I get to his office, my psychiatrist notes how tired I look, which is great. Then he says he expects, next time I see him, I’ll come in dragging an IV behind me. He even stands up and does an imitation. Finally, taking pity on me, he refills all my prescriptions.

4:30 p.m. I try to get organized for tomorrow’s trip to LA, stopping intermittently to look at our editor’s various tweaks on the pilot.

7:30 p.m. I make dinner, answer a few emails and wait for the editorial changes. I print out a copy of my novel-in-progress, which I’ve had to set aside for a summer book tour and then pilot production. I tell myself I’ll read it on the airplane tomorrow.

9 p.m. Watch today’s revisions on my computer and send a few related emails before shutting down for the night.

5:45 a.m. Wake up 15 minutes before my alarm because I always think I’m going to miss every flight, ever.

7 a.m. After getting through security, I wander for 15 minutes to find the shortest coffee line. Waiting, I answer a bunch of emails related to today and retweet an announcement for a “Noir at the Bar” fundraising event I’m participating in at Kew & Willow Books in Queens.

I manage to get in 15 minutes of reading about Gloria Swanson’s torrid affair with Joe Kennedy and the making of “Queen Kelly,” the silent-film epic directed by Erich von Stroheim. One actress had to lie naked on a bed with a large white cat stretched on top of her for 24 hours straight to get the shot von Stroheim wanted.

10 a.m. I try to catch up on the pilot scenes that have small changes we’re trying out. Something about being on the plane helps with my concentration. The speed of the TV stuff vs. the self-imposed pace of novel writing has been a big adjustment, and going back and forth often feels like whiplash.

12:30 p.m. (Pacific) Land at LAX and take a Lyft to the Universal lot. The pilot postproduction work takes place in the Rock Hudson Building, past the big Hitchcock building with his famous profile on the side.

2 p.m. At the offices, Gina and I watch the pilot again with all the revisions to see if the changes are working. It’s time to turn it into the network and commence finger-crossing. After, I take a Lyft to Beverly Hills, where I’m participating in the Vanity Fair New Establishment Summit — a starry two-day event that includes speakers and panelists like Hannah Gadsby and Alanis Morissette. I’m on a Wednesday panel about novelists working in TV, but tonight is the cocktail party.

There, I run into one of my co-panelists for tomorrow: Charles Yu (a novelist and TV writer for “Westworld” and “Lodge 49”) and his wife, Michelle. Together, we wonder how we are here. Impostor syndrome.

9 p.m. Weary from the time difference, I walk back to my hotel and crawl into bed.

5 a.m. Wake up and stumble downstairs for coffee. I try to get caught up on emails: logistics for Saturday’s Morristown Book Festival, etc.

9:30 a.m. Walk over to the Wallis Annenberg Center, where the New Establishment Summit is underway. The greenroom is bustling, and I meet my co-panelist Amelia Gray, a novelist who wrote for “Maniac” and now “Mr. Robot,” and we find ourselves in a conversation about Isadora Duncan. (Her last novel, “Isadora,” imagined the dancer’s life.) Charles arrives, along with our moderator, Noah Oppenheim, who is the president of NBC News yet somehow managed to write the screenplay for “Jackie” and who feels like the busiest person in a room full of terrifying busy people (AI experts, CEOs, etc.). Our panel goes quickly and is lively. I’m always fascinated by how different writers rooms work. Apparently, Red Vines dominate in all of them.

1:30 p.m. I grab lunch and try to devote a few hours to work back in my hotel room. I very tentatively attempt to read a section of my neglected novel-in-progress and soon realize all the chapters are out of order. The thought of restructuring is so overwhelming, I fall asleep, waking just in time to meet Gina for drinks.

7 p.m. Back at my hotel, I eat chia pudding for dinner and watch “The Real Housewives of Dallas.” An unceremonious end to the day.

6 a.m. I head out for oatmeal again and an early-morning walk around Beverly Hills. Back in my room, I tweet about Elmore Leonard’s birthday, which helps get my brain going (and also reminds me how badly I need to get back to my own writing, that neglected novel-in-progress). Then, emails, packing. I never quite know how to fill that anxious, semi-wasted time before a midday flight home. I lack the concentration to do real writing, so I just do busywork.

11 a.m. I head to the airport and, finding my flight delayed, grab the nearest bar stool, order a beer (it’s always 5 o’clock at airports) and dive into a galley of Hilary Davidson’s upcoming suspense novel, “One Small Sacrifice,” which absorbs me handily through the next two hours’ wait.

Midnight (Eastern) A bumpy and late landing at JFK and I’m home just before midnight, making a quick late dinner of salad and smashed Peeps I find in my suitcase from Tuesday night’s party.

8 a.m. Back at home and no excuses. I spend the morning pummeling away at my work-in-progress. After an unusually breathless week, there’s a lot of relief in sitting quietly, wrestling with sentences. Tunneling back into the characters, hunting for the voice.