Meet the People Who Stuck With Us in 2017 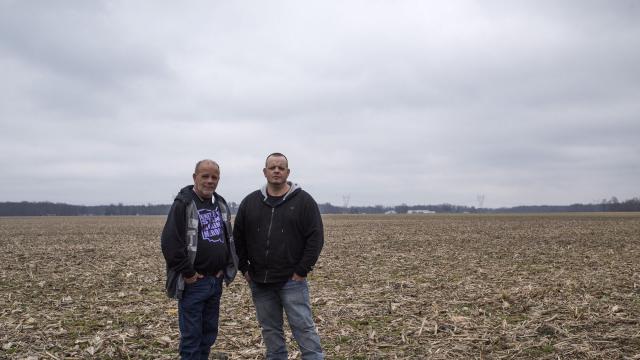 It was a newsy year across the country, filled with hurricanes, shootings, wildfires, marches and more. National correspondents for The New York Times wrote about these events as well as other stories about families and communities grappling with opioid addiction, the federal government’s crackdown on illegal immigration, and on teenagers celebrating prom night.

As 2017 nears its close, we checked back in with some of the people we talked to over the past year who stuck with us long after the stories ran:

After two of his adult children died of drug overdoses, Roger Winemiller turned back to his land. He sowed another season’s crop of soybeans on his southern Ohio farm, repaired machinery and raced to get the harvest done amid weeks of punishing rainstorms.

But grief has shadowed him at every furrow and turn, he said, still as sharp and raw as when his daughter, Heather Himes, and his son Eugene died several months apart after long struggles with heroin addiction.

“There’s no medicines that can cure this,” Winemiller, 61, said. “You just find ways to cope with it and go on with life. There’s no other choice.”

He has tried to balance caring for himself and looking after his sole surviving son, Roger Winemiller Jr., who is battling the addictions that killed his siblings.

Last March, they and fellow farmers and neighbors around Blanchester, Ohio, told us the story of how opioid abuse had ransacked their rural community. Since then, Winemiller has ferried his surviving son to probation appointments and drug tests, taken him to counseling, paid off some old fines and helped get his driver’s license reinstated.

Now, Roger Winemiller Jr. drives himself to counseling and to doctor’s appointments. He talks excitedly about becoming a drug counselor himself, and he has his eyes trained on Jan. 5 — his one-year anniversary sober. “Phenomenal,” he said. “It’s the benchmark.”

He found a temporary job packaging croutons and salad dressings for pre-made meals, but the work comes in unpredictable spurts. He still lives with his father on the family farm, in his childhood bedroom, and they have clashed at times over their shared and separate pain.

Winemiller said he was proud of his son’s progress, but seeing his two other children falter during recovery and slip back into drug use has made him wary and mistrustful. When gas money gets spent quickly, Winemiller said he found himself prodding his son about where it all went.

“I don’t necessarily believe him all the time,” he said.

He has tried to address his own grief, but one therapist moved away and another seemed to do little else than listen, he said. He has gone through depressions that seemed to darken and ease almost with the seasons. What some people fail to understand, Winemiller said, is that even as months pass, the loss and grief are always there.

“I miss my kids,” he said. “Yes, I am very grateful for Roger still being here and still being sober and doing what he’s doing. I’m very blessed. But I just feel so empty.”

A Couple Made a Pact to Move to Mexico If Trump Won; They Are Still in Harlem

Before the sun had risen on a cold December morning, Irvi Cruz stood in his Harlem apartment slicing apples and cucumbers for his 3- and 5-year-old daughters, Ana and Sara, while the girls sat on the couch, spellbound by cartoons.

As the 2016 presidential election approached, Cruz and his wife, Rachel McCormick, had made a pact, which we wrote about in January: If Donald Trump won, they would move to Mexico, where Cruz was born. But so far, the couple has delayed following through.

The pressure that prompted their agreement has not let up — it’s only increased. For years, Cruz, who is undocumented and has no path toward legal status even through marriage, and McCormick, his American-born wife, have strained to function as a normal family, despite the fear that one false step could rip them apart. The Trump administration’s unbridled enforcement of immigration laws has intensified the threat, as authorities scour the country, targeting more people for deportation.

But their bargain has also forced the couple to reckon with the parts of their lives that they have decided are worth the risk: The slanted grin that sweeps across Ana’s face each morning when Cruz tells her that it’s time to go to her Spanish-immersion preschool or the way that Sara swells with excitement to meet her friends at her favorite park.

— CAITLIN DICKERSON A Neighborhood in an Indiana City Fought and Stayed Put, But Friendships Have Frayed

For months, Ellen and Dave Keith worried about a land grab. City officials in Charlestown, Indiana, population 8,100, seemed determined, the Keiths said, to get rid of them and everyone else in their neighborhood so that a developer could build something fancier. To them, it felt like a middle-class city trying to push out those who had less. And so began a painful court fight, which we wrote about in February.

This month, a judge granted a preliminary injunction in favor of the Keiths and their neighbors, concluding that city leaders could not fine people for code violations as a way to force them to give up their homes. It was a victory for Pleasant Ridge, a battered neighborhood of prefabricated World War II-era homes in this southern Indiana city.

“We won that part, yes,” said Dave Keith, who is 69 and has lived here for decades.

“But really, things have gotten worse,” he said. “What we’ve found out is that there are quite a few people around here who want Pleasant Ridge gone. We used to feel like we were upstanding citizens and part of the community. Now people look down their noses at us, like you are messing up their city.”

Since the fight over Pleasant Ridge began, Ellen Keith, 64, said she had lost clients at the Hair & Such Beauty Salon where she cuts hair. Dave Keith said the couple had lost friends. Even some of his relatives, he said, seem to think that Charlestown would be better off without Pleasant Ridge, which city officials say draws a disproportionate amount of crime, drugs and animal control nuisances.

City officials, who did not return phone messages, have announced they will appeal the court ruling. But even as the debate has played out, Pleasant Ridge has emptied; people sold their homes and moved away.

“The neighborhood really looks sad now,” Ellen Keith said. “There are lots of boarded-up places. It has done something for the people who are left though. Our little community? We are bonded like glue.”

A Prom King in Flint, Michigan, Decides to Invest in His Home

This was it, Treveyon Allen decided as a golden crown was placed on his head one evening in May, when we covered the shimmering, joyful height of his high school experience, his prom.

Now it was time to get out of Flint, Michigan.

Allen had applied to a college in North Carolina, 600 miles away, and received an acceptance letter. He was ready to break out on his own, leaving behind the tainted-water crisis that had plagued life in Flint for years.

At 19, Allen would be far away from so many comforts: his mother, stepfather and siblings on the North Side of the city. The tight circle of friends he had known his whole life. The familiar, if damaged, cocoon of his hometown.

Packing up and leaving started to feel impossible.

“When I really sat down and started thinking about my future, I just didn’t want to struggle on my own,” Allen said. “There would have been nobody there to turn to if I needed something.”

This summer, amid a swirl of parties and trips to amusement parks with his friends, Allen made a new plan. He enrolled at Mott Community College in Flint, ready to study finance and business administration. When college classes began this fall, they were nothing like high school.

“After graduation, life just hits you right in the face,” Allen said. “It ain’t no more your mom waking you up for school. You have to wake yourself up, manage your own life. Everything is just overwhelming.”

The professors had high expectations, far tougher than Allen was used to. They expected him to arrive in class on time, turn in assignments without delay, keep up with the reading.

He struggled at first. But then he fell into a new rhythm of life — get his college work done, go to church on Sunday, teach dance classes on the weekends.

A circle of friends gave him encouragement, group-texting daily and checking in on one another.

He is lining up goals for 2018. He wants to start a local nonprofit devoted to the arts, to help Flint kids like himself.

The drinking water at his family’s house should be better by now. The city installed new pipes this year at Allen’s home, one of the more than 5,000 residences to receive new service lines. The family is still using bottled water, wary of promises from city officials that the water is fine.

“I don’t want to see Flint fail,” Allen said. “I still have hope for Flint. When I get older, I plan on moving, but I’ll always come back and support Flint. Everything about it, all the cracks and the bruises and the messed-up water. It’s home.”