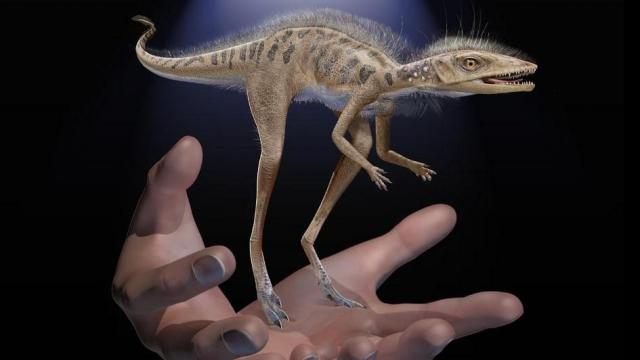 Raleigh, N.C. — While dinosaurs and flying pterosaurs are known for their size, one of their ancestors might have been able to fit into the palm of a hand.

Meet the Kongonaphon kely, also known as the ”tiny bug slayer" that lived 237 million years ago. The reptile would have been around four inches tall, and weighed about a pound according to Christian Kammerer, a research curator of paleontology at the North Carolina Museum of Natural Sciences.

"It's striking that it's actually very tiny. We usually think of dinosaurs being quite gigantic, but we're suggesting that they actually come from very, very small ancestors," he explained.

While the fossil isn't actually a dinosaur, it shares a similar ancestry.

Kammerer explained the Kongonaphon kely is a part of the Lagerpetidae group, one of the earliest dinosaurmorphs. This new fossil is the smallest though, with others being estimated to have been around the size of rabbits.

The fossil was originally found in southwestern Madagascar in 1998. A description and analysis of the fossil was published Monday in the journal Proceedings of the National Academy of Sciences.

Jaw material from the fossil helped explain what its behavior was like.

"Looking at the teeth, the teeth are quite distinctive. They're very small, closely packed, unserrated. They're very similar to what you see in an insect-eating lizard today," described Kammerer.

The fossil also has long legs, which Kammerer explained probably meant the Kongonaphon was a fast-moving animal.

"We suggest that it was an active predator, catching little bugs, other little invertebrates," explained Kammerer. "That's different than most of the reptiles of that time, most of which are big carnivores that are eating other reptiles."

The fossil helps researchers further understand the evolution of dinosaurs and its predecessors.

"We're finding that the earliest ancestors of dinosaurs, these things near the common ancestry of dinosaurs and pterosaurs were very small," said Kammerer. So, when we look at that data statistically, when we do estimations of body size throughout archosaur evolution, we do find evidence for this size squeeze where they start out medium size reptiles, then you have a lot of these really tiny things early in their evolution, and then they become gigantic in the dinosaur lineage."

The fossil is currently at the American Museum in New York.