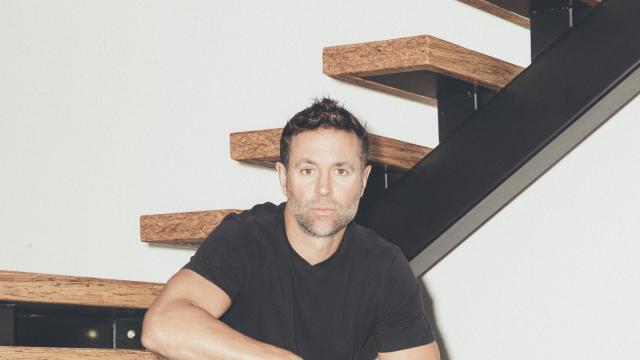 In an episode of “It’s Always Sunny in Philadelphia” titled “The Gang Tries Desperately to Win an Award,” the barkeeps of Paddy’s Pub — Mac (Rob McElhenney), Charlie (Charlie Day), Dennis (Glenn Howerton), Dee (Kaitlin Olson) and Frank (Danny DeVito) — learn that a local best bar award is up for grabs.

Their Philadelphia establishment — dark, unsanitary and almost always empty — has never been nominated, and they hate to admit that they’re bothered by the lack of recognition.

The plot is a not-so-subtle jab at the Emmy Awards. The episode aired during the show’s ninth season — Season 13 debuts Wednesday and the show still has never collected any major industry accolades.

It has, however, earned three Emmy nominations, all of which went to the show’s stunt coordinator, Marc Scizak.

Scizak, 40, has been a stunt performer and coordinator for roughly 20 years. In that time, he’s worked on films and shows that would seem to naturally involve plenty of dangerous action (“Dunkirk”) and others that might not (“The Goldbergs,” “Pretty Little Liars”).

“Sunny,” a zany comedy about five narcissists running a bar, falls in the latter category. But the show also includes physical high jinks alongside all the preposterous plans and toxic behavior. (McElhenney, the creator, gained 50 pounds before Season 7 as part of an extended gag. In Season 13 he is incredibly fit, the subject of a running joke in Wednesday’s premiere.)

Scizak, who joined “Sunny” in 2009, is McElhenney’s stunt double and has contributed to more than 50 episodes.

“My job is to essentially take out as many variables as possible and keep them as safe as possible without impeding their comic genius,” Scizak said.

When Howerton, Day and McElhenney, who write many of the episodes, include stunt scenes, Scizak plans how they would be executed and takes note of potential risks.

“Even if they don’t think they know exactly what they want, they do know what they want and they’re really good at giving me direction,” Scizak said. “They’re all really smart, talented and coordinated actors, so they’re not people who are going to end up stupidly hurting themselves.”

There aren’t many stunts in Season 13, but the trailer features some (most notably one in which McElhenney lifts Olson, his wife, by the crotch).

While Scizak says action films challenge him and allow for more creative control, comedy has its perks, too. “Sometimes we have to reshoot scenes because we’re all laughing too hard behind camera,” he added. “That’s a good problem to have.”

Here are some of his favorite stunt sequences from the show.

— Mac to the Rescue

In “The Gang Saves the Day,” the group witnesses an armed burglary while shopping at a convenience store. As they huddle in an aisle, each character imagines what they would do to take control of the situation. Mac, who desperately wants to be seen as a formidable martial artist, envisions himself fighting a crew of Yakuza thieves.

The elaborate scene was shot in 1 1/2 days. If it were filmed for an action movie, Scizak said, it would have taken a month. And while the Tom Cruises of the world typically have months to train for such fights, McElhenney, who performed most of the stunts, only had a day to prepare.

“He essentially said, ‘Just make me look badass,'” Scizak said. “It was a very, very large undertaking and I think it turned out really nice.”

While most of the stars aim to perform their own stunts, Olson is particularly keen on doing so.

“She is so incredibly talented that it is so hard to double her because nobody has her delivery, her body mannerisms, the ability to match her so well,” Scizak said. “On bigger gags where she’s going to get hurt, we have to kind of reel her back a little because she just goes for it.”

In a scene from “The Gang Goes to a Water Park,” Dee and Mac get stuck inside a tube slide meant for children and are repeatedly pummeled by the young riders coming down behind them.

“We were literally dropping kids down on [Olson] as her face is getting smushed up against the top of the tube,” Scizak said. “She didn’t feel like it sold right and wanted to go harder with the kids.”

In “Who Pooped the Bed?,” which aired before Scizak joined the show, Dee tries to steal shoes that are a tad too small. As she rushes out of the store with them on, she falls and bangs her head against a car, leaving a dent and triggering a car alarm.

The scene was initially shot with a stunt double — Scizak’s predecessor thought it was too dangerous for Olson — but the cast asked that she give it a try anyway. “She did that and it ended up being genius,” Scizak said. “It was amazing, and she does that stuff all the time.”

Another favorite is from “A Cricket’s Tale.” A minor character, Rickety Cricket (David Hornsby), steals a baguette and escapes by performing parkour down a stairwell. In the same episode, Cricket jumps out of a window, tumbles onto a roof and lands on a moving truck. “There were no wires on hand,” Scizak said. “That was obviously a stunt double but it was a really fun scene.”

DeVito, 73, doesn’t shy away from the action either.

In a challenging scene from Season 12, also in the water park episode, Frank rides a towering, dry slide that is closed off to customers. Charlie tries to lubricate the surface with water, but Frank inevitably ends up burning his back.

The shoot posed too many hazards to DeVito so Scizak brought in a stunt double. “Danny’s ability to do the physical comedy is pretty amazing,” Scizak said. “I think if we asked him to, he would have done it.”