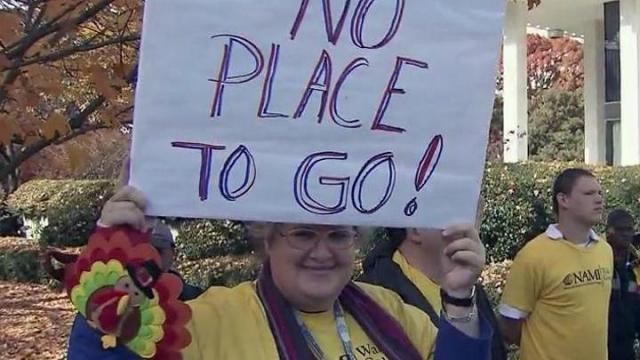 RALEIGH, N.C. — Residents of group homes across North Carolina face their own fiscal cliff at the end of the year, when a change to state Medicaid rules cuts their benefits and could force them out on to the streets.

About 2,000 people with mental illness or developmental disabilities who live in group homes won't be eligible to have Medicaid pay for personal care services, such as help feeding themselves or bathing, as of Jan. 1. The loss of funding puts the homes that rely on that money at risk of closing.

Federal regulators pushed the changes to ensure the same personal care eligibility standards exist for people no matter where they live, instead of having rules that may steer people toward institutional care.

"Sometimes I pray about it, and sometimes I can't sleep, just wondering whether we're going to have a roof overhead come Jan. 1 or not," Robert Bullock, who lives in a group home in Cary, said Tuesday.

The mood there is grim, with Bullock and his housemates receiving letters this week telling them they may lose their home in 21 days.

"We'll have to go somewhere because, when they send out the notices telling you've got to go, what are you going to do?" he said. "You've got to find somewhere to go. It's either shelters or on the streets."

State leaders have known about the problem since July but haven't fixed it.

"It is unfair. It's cruel. It is unnecessary," said Julia Adams, assistant director of government relations for The Arc of North Carolina, which works with people with mental illness and developmental disabilities.

"Our most vulnerable citizens in the great state of North Carolina are being held hostage by this right now," Adams said.

House Speaker Thom Tillis has requested Gov. Beverly Perdue to call lawmakers to Raleigh for a special legislative session so they could address the problem.

Perdue has vowed that the group home residents won't be left homeless, but she said state law prevents her from shifting state money to resolve the issue.

A spokesman for the governor said Tuesday that she is exploring other options and will announce her plans to fix it by the end of the week.

Bullock said he's contacted the Governor's Office many times in the past few months about the issue, but he's never received a response.

"Time is getting really short now, and we need some kind of solution," he said.