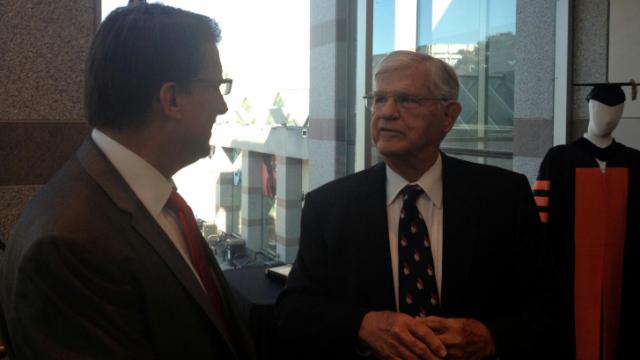 Raleigh, N.C. — Gov. Pat McCrory and two of his predecessors have sued the General Assembly to stop a newly created Coal Ash Management Commission and others like it from taking over executive branch functions.

The lawsuit, filed in Wake County Superior Court on Thursday, says that lawmakers usurped McCrory's authority by creating commissions to carry out functions normally overseen by state agencies directed by the governor.

The move puts the Coal Ash Management Commission squarely in the spotlight as it prepares to meet for the first time Friday morning.

Lawmakers created the panel to oversee the cleanup and regulation of coal ash, material left over after coal is burned for fuel. A coal ash spill that dumped millions of gallons of toxin-laced water into the Dan River in February brought the issue to the public's attention. Legislators said that an independent body was needed because, among other reasons, the Department of Environment and Natural Resources was under federal investigation related to its oversight of ash ponds.

But McCrory said the move took away his constitutional authority to carry out the laws of the state. He is joined in the suit by former Govs. Jim Martin, a Republican, and Jim Hunt, a Democrat. The suit names as defendants legislative leaders as well as the members of the coal ash commission. McCrory asks that the members appointed by the legislature be removed from their seat and that the court declare legislative appointments to executive branch commissions unconstitutional.

The suit also says lawmakers should not be able to force the governor to issue certain executive orders.

McCrory, a Republican, has not always seen eye-to-eye with the Republican leaders of the General Assembly. He said Thursday the lawsuit and the disagreement it addressed were "not acrimonious" but meant to head off the "encroachment of the legislative branch into the responsibilities the people of North Carolina have vested in the executive branch."

While the coal ash commission is the most pressing example of such a commission, it is not the only one lawmakers have contemplated. A Senate-drafted study this year would have placed the management of the state's troubled Medicaid system under an independent commission, taking it away from McCrory and Secretary of Health and Human Services Aldona Wos.

The suit also points to a newly created Oil and Gas Commission that is supposed to oversee development of the state's energy sector, which is supposed to take shape in 2015.

Senate President Pro Tem Phil Berger, who appears headed to another term as the Senate's top leader, and House Speaker Thom Tillis, who was elected last week to the U.S. Senate, issued a joint statement decrying the governor's suit.

"Today the governor sued to stop independent boards created in two bills – one he chose to sign and another he allowed to become law. He vetoed neither," they said in the statement. "The General Assembly’s right to appoint members to independent boards – which are beholden to no single appointing authority and provide truly independent oversight – is far from new and has long been upheld by our state Supreme Court. Unfortunately, the governor’s costly and time-consuming lawsuit to ensure he picks the majority of regulatory board members ignores history and detracts from their important work."

According to the lawsuit, McCrory had to get sign-off form the state's top lawyer before bringing the case.

"On November 12, 2014, the Attorney General of the State of North Carolina granted the Governors leave to bring an action in the name of the State to remove individuals unlawfully appointed by the General Assembly to executive branch boards and commissions," reads the suit.

Attorney General Roy Cooper, a Democrat, is seen as a likely challenger to McCrory in 2016.