McCrory plans to veto abortion bill unless changes made 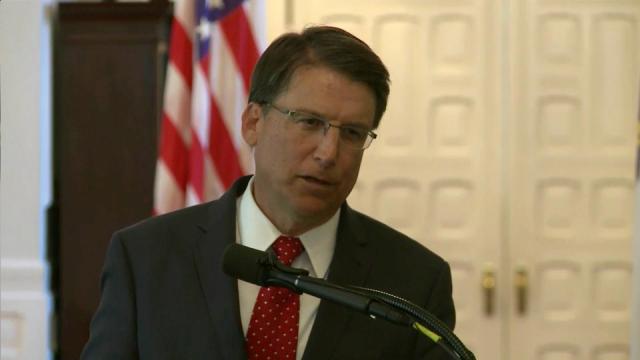 Raleigh, N.C. — Gov. Pat McCrory said Wednesday that he will veto a House bill designed to adopt new restrictions on abortion clinics unless significant changes are made to the legislation prior to its passage by the House.

Pointing to suggestions made Tuesday by Department of Health and Human Services Secretary Aldona Wos, McCrory said in a statement that House Bill 695 needs to be further clarified to ensure that it clearly protects the health and safety of women.

McCrory also noted in his statement that major portions of the bill are of "sound principal and value." Even with a veto from McCrory, Republicans have large enough majorities in both the House and Senate to override it.

Suzanne Buckley, executive director of NARAL Pro-Choice North Carolina, said in a statement Wednesday that the group is "encouraged" by McCrory's statement. NARAL launched the She Decides campaign in April to hold McCrory accountable to his campaign promise not to restrict abortions in the state.

"The thousands of messages sent to Gov. McCrory through our campaign have had a significant impact," Buckley said in a statement. "But the fight is far from over. We will continue to fight House Bill 695 to protect access to safe and legal abortion care in North Carolina."

Wos urged lawmakers Tuesday to slow down their efforts to pass the bill, saying some of the provisions need more study.

In an unusual move, the House Health and Human Services Committee held a two-hour public hearing Tuesday on House Bill 695, which was passed last week by the Senate and needs only a concurrence vote by the full House to pass.

House leaders moved the bill back to committee after days of complaints by abortion-rights and good-government advocates, as well as McCrory, over the Senate's handling of the bill. The Senate used a late-day committee hearing to tack abortion measures onto an unrelated bill without public notice and rushed it through approval in less than 24 hours.

Bill sponsors contend that they are trying to improve the safety of abortion clinics statewide by requiring them to meet the same standards as ambulatory surgical centers. Clinics also would have to have "transfer agreements" with nearby hospitals, which are roughly equivalent to the hospital granting the physicians admitting privileges, and physicians would have to be present with the patient throughout an abortion, whether surgical or drug-induced.

"It is not our goal to shut down every clinic in North Carolina," Rep. Ruth Samuelson, R-Mecklenburg, said Tuesday. "What we want to do is make them safer."

McCrory said Monday that he feels some of the provisions go beyond safety and wander into the realm of restricting abortions, which he opposes. Wos echoed that line Tuesday, saying "much uncertainty remains" in the bill's provisions.

"I urge you to follow the governor’s advice and leadership and spend more time studying these issues," she said.

Wos acknowledged that state regulations for abortion clinics need to be updated, saying that they haven't been changed since 1995. But said also noted that DHHS lacks the resources to inspect the clinics more than one every three to five years.

Republican lawmakers said they would work with Wos to resolve her concerns by the end of the week.