McCrory says he will act on coal ash without legislation 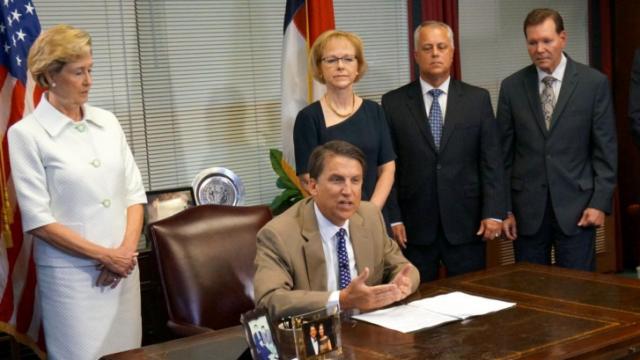 Raleigh, N.C. — Gov. Pat McCrory says he will take steps to take the water out of four "high priority" coal ash ponds and clean up other sites in the wake of lawmakers' failure to develop a consensus coal ash cleanup bill.

"With or without legislation, we're going to move forward to protect the waters of North Carolina from coal ash," McCrory said Friday afternoon, less than 14 hours after negotiations between the House and the Senate broke down.

Lawmakers plan to leave Raleigh for the summer this week and have, for the time being, delayed efforts to craft a final coal ash bill until November.

Coal ash became a pressing policy and political issue Feb. 2, when a pond located at the former Duke Energy power plant on the Dan River in Rockingham County dumped 40,000 tons of the toxin-laced goop into the river. Coal ash is the material left over after coal is burned for fuel. Although much of it is inert, it is infused with mercury, arsenic and other toxins.

McCrory's administration was initially criticized by environmental groups for not reacting quickly enough to the spill and for blocking efforts by advocates to push Duke to clean up the ponds before the spill. Since then, the governor put forward his plan to clean up coal ash sites throughout the state. Lawmakers have debated different versions of the bill since May.

On Friday, McCrory said Executive Order 62 will instruct the Department of Environment and Natural Resources to conduct groundwater monitoring at all 33 coal ash ponds located at 14 sites throughout the state. However, he could not say how this monitoring would differ from work that the department could already do.

Four coal ash sites, including the Dan River location, are considered "high priority" under various drafts of coal ash cleanup legislation. Those sites will be the first to be "de-watered," McCrory said, although it wasn't immediately clear whether the governor plans to push for the removal of the material or simply cap the ash where it sits.

The text of McCrory's order was posted about an hour after McCrory finished speaking, and does not specifically deal with those high-priority ponds.

“The governor’s executive order does not do what he says it does. In fact, it doesn’t seem to compel DENR to do anything more than the law already requires,” said Donna Lisenby, global coal campaign coordinate for Waterkeeper Alliance. “Issuing this on a Friday afternoon, and implying it’s a major step to protect North Carolina’s waterways is totally misleading.”

Lynn Good, chief executive of Duke, said that the utility plans to continue working on a cleanup on its own.

"Our goal is to lead with a proactive, fact-based and scientific approach to this work, and we continue to advance the comprehensive plan we proposed last March," Good said in a statement. "The work we're doing now allows us to continue down the path toward permanent closure of our ash basins in North Carolina."

Although he can move forward within current law, McCrory says his executive order won't be enough to address the coal ash problem.

"It is not a substitute for comprehensive legislation since it cannot address some existing loopholes," he said.

In particular, McCrory said that more stringent dam safety inspections should apply to coal ash pits and that there should be more rules governing how the material can be used for structural fill. As well, McCrory said, legislation needs to speed up notifications of local communities when there is a spill.

Asked what he thought the legislature's impasse said to voters, McCrory downplayed the problem.

"I think they're going to work it out," he said.

However, he added that he did not agree with the coal ash commission called for in both the House and Senate versions of the bill. That commission, he said, could be an unconstitutional infringement on his executive powers.

Senators who favor the commission say it will help ensure public confidence to have a politically independent body overseeing the cleanup.