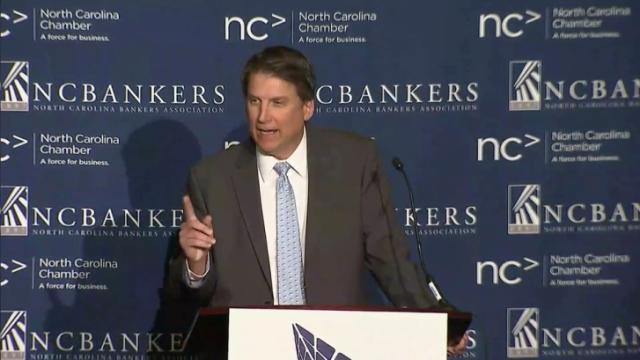 Raleigh, N.C. — Gov. Pat McCrory says he's going to ask federal policy makers to allow North Carolina to chart its own course on health care rather than be closely tied to its existing Medicaid program.

"I am encouraging our congressional leadership and the president, whom I'll be meeting with (Tuesday), to be allowed to devise a North Carolina solution to health care for our families and our employers instated of a regulated Washington program that increases costs without improving care," McCrory said during a speech to business leaders at the Economic Forecast Forum sponsored by the North Carolina Bankers Association and the North Carolina Chamber.

McCrory said he will be meeting with President Barack Obama as part of activities associated with his role in the National Governor's Association. Vice President Joe Biden and cabinet officials are scheduled to be part of that meeting as well.

After his prepared remarks, McCrory spoke to reporters and expanded on his health care comment. To make the changes he wants, he said he needs to win over both North Carolina's legislature and Congress.

Lawmakers and the Governor's Office have been grappling for much of the past two years with Medicaid, the state's health insurance program for the poor and disabled. McCrory has pushed for a reform effort that would allow state hospitals and medical providers to create accountable care organizations, or ACOs, to manage patient care. That approach won adherents in the state House, but most state senators seem to favor an approach that would involve large managed care companies and insurers.

McCrory said he will call on lawmakers to once again take up the accountable care organization plan this year during his State of the State address.

Even if McCrory gets what he wants from state lawmakers, those plans would have to be approved by federal regulators. Although he wasn't specific, McCrory pointed to this oversight from the federal government as a hindrance in not only reforming North Carolina's Medicaid system but taking on expansion.

As part of the federal Affordable Care Act, what some people call "Obamacare," states were encouraged to expand Medicaid to those earning up to 138 percent of the federal poverty line. North Carolina has opted not to take that route, with lawmakers and the governor alike saying they can't be assured that the federal government will continue to subsidize the expansion after the initial 10-year period.

McCrory said that, in addition to assurances on continued federal funding, he would want the federal government to grant North Carolina more flexibility in administering Medicaid before he pushed for expansion.

"The current lack of waivers on how the states can develop their own programs make that choice unattainable at this point in time," he said.