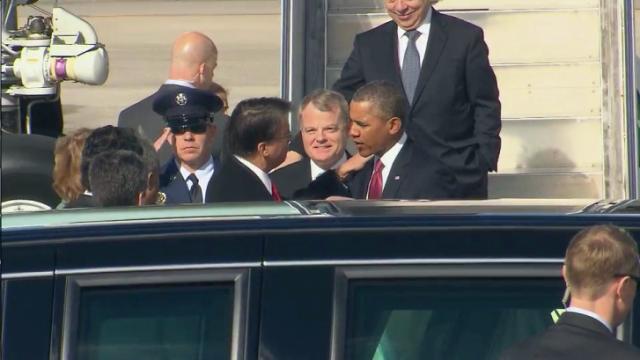 McCrory was first in line to shake Obama's hand as he came down the steps from Air Force One, and he clapped his left hand onto the president's shoulder as they spoke briefly on issues such as jobs, Medicaid, food stamps and offshore drilling.

McCrory said he introduced himself to Energy Secretary Ernest Moniz and agreed to meet next month to discuss offshore drilling.

The governor even gave a one-armed hug to Democratic 7th District Congressman Mike McIntyre, who flew down from Washington, D.C., with Obama.

"When we talk about jobs and the economy, it’s always the No. 1 issue here, the No. 1 issue nationwide, and to see this kind of attention from, literally, the highest level of government, it’s an exciting time,” McIntyre said.

McCrory said he was pleased Obama chose N.C. State to lead a consortium of six universities and 18 private-sector companies to create the next generation of electronics to boost manufacturing efficiency. North Carolina has committed at least $10 million over the next five years to the effort.

"All of us agree, Republicans and Democrats, that we've got to grow manufacturing jobs, and manufacturing is coming back to North Carolina," he said.

"This is not about politics. It’s about North Carolina’s future," McIntyre said. "(It's) about making sure there are jobs for people in North Carolina and that we can be a role model for the nation.”

The mayors of Raleigh, Durham and Chapel Hill – all Democrats – also greeted Obama at RDU.