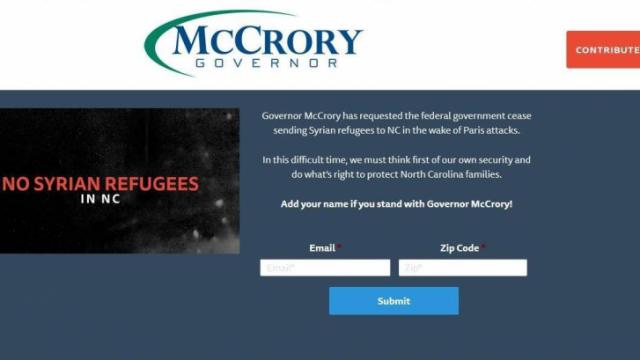 Raleigh, N.C. — Gov. Pat McCrory's campaign is raising funds on what has become a largely partisan political fight over whether Syrian refugees are welcome in North Carolina. But despite frequent calls for more information on refugee screening, the governor did not take part in a White House briefing on the issue.

On Monday, after the Paris attacks, McCrory held a press conference to announce he would ask the federal government not to send any more Syrian refugees to North Carolina. He said federal refugee programs share very little information with states about who refugees are or how their backgrounds have been checked.

"We would trust them (the federal government) more if they would tell us more about what they're doing," he said.

While saying that he empathized with the plight of Syrians driven from their homes by ISIS, he said, "I want to make sure we're not opening ourselves up to a potential terrorist situation."

On Tuesday, McCrory said on CNN he was glad to hear that the White House would hold a call with governors that evening to provide more information about how refugees are screened. "We need to be given the confidence of what exactly that process is," he said.

Wednesday morning, in a press release, McCrory said his position had not changed.

It goes on to quote McCrory: "It was a good first step, but we need the White House to understand that we are all on the same team. The president has to understand that concerns of the states are legitimate and need to be addressed."

However, McCrory said on NPR's "Diane Rehm Show" on Wednesday morning that he had not joined the White House call.

"Gov. McCrory was on an already scheduled flight to the meeting of the Republican Governors Association," Wilson said.

According to the White House summary of the nearly 90-minute call, "a bipartisan group of 34 governors from across the country" was briefed on the refugee screening process by high-ranking officials from the State Department, Homeland Security, FBI, National Counterterrorism Center and Health and Human Services, "including an extensive question and answer session among the governors and Administration officials."

Wilson questioned how the White House came to that number, saying there was no roll call on the briefing.

In the meantime, the governor is raising campaign funds on the issue.

A page on the McCrory campaign website features a dark graphic that says "NO SYRIAN REFUGEES IN NC."

"In this difficult time, we must think first of our own security and do what’s right to protect North Carolina families," reads the page text under a large red "CONTRIBUTE" button. "Add your name if you stand with Governor McCrory!"