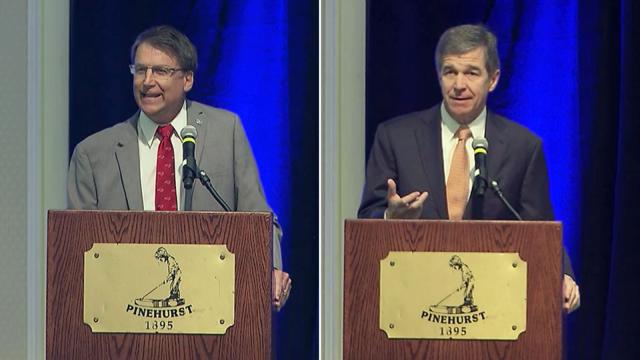 Gov. Pat McCrory launched a pair of new campaign ads on Monday, one touting his record on education spending and the other slamming his Democratic rival on House Bill 2.

The Republican's campaign called attention to the first ad via email and through social media, recounting how teacher pay had dropped during the previous administration.

"Then I became governor and gave teachers the largest pay raise in the country," McCrory says in the ad. "We've raised it every year since, and our high school graduation rate is now the highest in history. That's investing in our future. Average teacher pay next year will be over $50,000."

McCrory's claim regarding $50,000 average pay is true, but it relies on statistics that factor in county supplements, and teacher pay varies greatly from county to county.

The campaign rolled out a second ad with no announcement or discernable social media push. That ad features a sexual abuse survivor and slams Attorney General Roy Cooper, who is running against McCrory, for not defending House Bill 2, a measure which, among other things, requires transgender individuals to use the bathroom corresponding with their birth gender.

"At nine, I was molested by a teenager," a woman named Gina Little says in the ad, titled "The Truth About Roy Cooper."

"When I found out that President Obama and Roy Cooper want to force school children to share the same locker room, shower and restroom with someone who claims to be the opposite sex, I was horrified," Little says.

The ad goes on to praise McCrory's efforts to defend House Bill 2 against a federal lawsuit.

Little has told her story in public before, saying she was abused by a family member.

Ricky Diaz, a spokesman for the McCrory campaign, would not comment on the relative size or timing of the two ad buys. He did not immediately answer a question via email about whether Little's story represents the concerns the governor and other defenders of the legislation have raised.

"It has nothing to do with HB2," said Chris Sgro, executive director of Equality NC, a group that lobbies on behalf of LGBT causes and has been a vocal opponent of House Bill 2. "North Carolinians are pretty clear that HB2 is about discrimination and is harming our economy. The governor is resorting to scare tactics as he sees himself trailing on this and others issues."

Sgro was referring to the loss of convention business and concerts due to the law, although McCrory's administration put out a news release touting increased visitor spending in the state.