McCrory has promises to keep 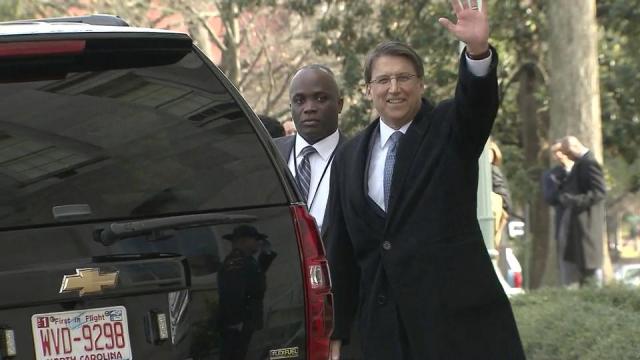 Raleigh, N.C. — When Pat McCrory took the oath of office Saturday, he both officially shouldered the great expectations that attach to anyone who becomes governor and the hopes of fellow Republicans happy to see a member of their party take the office for the first time in 20 years.

But in some respects, the man who holds the record as the longest-serving mayor of Charlotte is something a blank slate when it comes to his new job.

"We didn't have a whole lot of specific promises that candidate McCrory made," said John Dinan, a political science professor at Wake Forrest University. Instead of offering a detail-rich program of specifics, Dinan said, McCrory campaigned on the idea that government in Raleigh wasn't functioning right and he would be the one to fix it.

Along with winnowing regulations that the new Republican governor describes as a hindrance to business growth, McCrory has staked out ambitious but broad goals like remaking the state's tax system and getting various aspects of the education system to work together.

During a Dec. 20 news conference, McCrory issued directives to his new cabinet secretaries typical of his style.

"These include, one, instituting a culture of customer service in state government; two, identifying and implementing efficiencies in government; three, collaborating and sharing resources across departments and agencies; and last, but not least, instituting the highest ethical standards while serving in government," McCrory said.

So how can voters tell if he's following through?

One approach is to identify instances where he did make a specific promise and track his progress through a four-year term. The McCrory Promise Tracker details 33 such pledges and provides the metric that WRAL News will use to keep tabs on the new governor.

The tracker was assembled by pulling verifiable promises McCrory made either through policy positions on his campaign website or in statements during debates or to the news media throughout the state. Each statement will be scored on a scale ranging from "Achieved," for promises kept, to "Broken" where McCrory reverses himself.

Aside from measuring those specifics, political observers like Dinan said that McCrory's ultimate success or failure might be measured by the next election, and whether voters think he does a good enough job to earn a second term.

During the 2012 campaign, McCrory described North Carolina's state government as "broken." His straight-forward appeal to fix the system may have helped him win over swing voters who were disenchanted with a long run of Democratic administrations, said Pope "Mac" McCorkle III, a longtime Democratic strategist who is now director of graduate studies for Duke University's Masters of Public Policy Program.

"He promised change in Raleigh. That's how people will judge him," McCorkle said. Much like Barack Obama in 2008, McCorkle said, McCrory pushed the sense that something was wrong with the way government was running and promised to ameliorate that nebulous something. "He ran more on mood."

The challenge for McCrory, McCorkle said, is to channel voter dissatisfaction with Democratic control in Raleigh into a public policy agenda. No longer will he just be able to say the system is broken, he'll have to fix it.

As McCrory attempts to take on the job of government turnaround specialist and tackle his big-picture agenda, he may struggle to stay focused, said Kerry Haynie, an associate professor of political science at Duke University. The General Assembly by its nature does not always pursue a focused agenda, and McCrory could get pulled down controversial and time-consuming side roads.

Legislative initiatives that push social issues such as abortion and gun laws or difficult-to-solve immigration policies could pull McCrory off that centrist track, Haynie said. Vetoing or refusing to sign such bills could aggravate lawmakers from whom he'll need support on fiscal issues, but embracing such policies could draw McCrory further to the political right than he wants to be.

On the campaign trail, McCrory avoided diving into some controversies. Asked, for example, whether he would sign any legislation further restricting abortion, McCrory offered a one-word answer: "No."

McCrory did pledge to back a law requiring voters to show photo ID, a favorite policy of conservative Republicans that also enjoys bipartisan support in polls despite bitter push-back from Democratic Party lawmakers. Perdue vetoed a similar bill in 2012 at the urging of elected Democrats, who fiercely battled against the bill as harmful to elderly and minority voters.

For his part, McCrory described the bill as a "common sense" measure that would help make elections more efficient, tying the issue back to a main theme of his campaign.

During the transition period between the election and taking office, however, McCrory doggedly avoided most controversies. Asked about squabbles between Perdue and Republican lawmakers over creating a park on the Dorothea Dix campus, solving a crisis involving group homes for the mentally ill or appointing a justice to the state's top court, the incoming governor demurred.

"She's the governor," McCrory said during a December news conference, declining to wade into the politics of the moment.

Observers say McCrory would do well to continue to stay out of small debates.

Whether McCrory is viewed as successful at the end of four years may have as much to do with the economy and factors out of his control. Like presidents, Haynie said, governors get more blame or credit for swings in the economy.

"It would certainly help him if the economy improves and he's seen as playing some role in that improvement," said the Duke University professor.

Dinan says that staking a claim to the tax reform discussion is a sensible thing for McCrory. It's a big economic policy that could be seen as playing into any eventual economic uptick.

"On the other hand," Dinan said, "that's a notoriously problematic issue that has losers as well as winners."

Still, as governor, McCrory will be able to drive a lot of the public conversation. The question is how much the legislature, in which Republicans now have veto-proof majorities and a two-year head start in office, will be inclined to listen and cooperate.

"There is always going to be a bit of a feeling out of positions between a legislature and a governor," Dinan said. "But nobody is able to command public attention in state politics like a governor is."

For their part, Republican lawmakers have cheered McCrory's election, seeing it as a chance to pass legislation without the constant threat of veto. Asked whether the General Assembly or the governor's office would have the lead in developing big picture reforms like remaking the state tax system, McCrory offered a diplomatic answer.

"It's going to be a partnership," he said, ticking off a list of legislative groups with which he had met. "Some ideas will come out of the executive branch, some will come from new freshmen members."

McCrory's call to work together and apply common sense to government seems to find favor with rank-and-file Republicans, who don't point to any one policy goal they expect to see out of the newly installed governor.

"One of the things we're looking for is a little more common sense in government and not spending more than we can afford," said Mark Schaffer, president of the Southern Wake Republican Club, a group of 50 to 60 voters who meet once a month and help campaign for GOP causes. Schaffer said he doesn't have a to-do list for the new governor — "I don't know his job well enough," he said — but he does hope a Republican governor will pare back taxes and regulations overseen by his Democratic predecessors.

Jeff Morse, a volunteer for the Wake County GOP who describes himself as a "staunch Republican" who has never voted for a Democrat, says there is plenty for the McCrory administration to do.

"You've got a ton of stuff inside North Carolina government that's just ... backwards," Morse said. He'd like to see McCrory try to privatize certain functions of state government. And he expects McCrory to have a hand in a widely discussed effort to update the state's tax system. More than anything else though, Morse said he hoped to see an attitude shift in government.

"The thing I loved the other day is when Governor-elect McCrory said 'customer service,'" Morse said. Too often, said the business owner, state agencies are hard to deal with. "We've all dealt with bureaucratic craziness."

During the campaign, Lt. Gov. Walter Dalton, McCrory's Democratic opponent, rolled out a series of policy proposals larded with specifics from tax changes to ethics policies. But voters didn't grab onto those policy proposals, choosing instead McCrory, who campaigned with a series of less-specific ads.

His spots were heavy on mood. While that may make the success or failure of McCrory's tenure harder to gauge, it does give him latitude that many incoming governors don't have.

"He could be said to have more leeway than other incoming governors, with no ties to specific proposals to worry about," Dinan said.

Days before taking office, McCrory laid out his agenda for the next four years at a meeting hosted by the N.C. Bankers Association and the N.C. Chamber of Commerce. It included reforming North Carolina's tax system, repaying a $2.8 billion debt for unemployment payments and paving the way for energy exploration. Much as he did on the campaign trail, McCrory set out broad goals but said he would rely on others in his administration to develop solutions and bring him ideas.

"During the past four weeks, we've been frankly drinking out of a fire hose," McCrory told the crowd at the N.C. Bankers' event. "You're given four weeks to fill jobs up to run a $20 billion budget."

As of his Jan. 5 swearing in, the most tangible yardstick for the new governor may be his work filling those jobs, specifically cabinet positions and other top administration posts.

That task has been made all the harder by the fact that the GOP does not have a deep bench in North Carolina's executive agencies.

North Carolina hasn't had a Republican governor since Jim Martin left office in January of 1993. Since then Democrats Jim Hunt, Mike Easley and Bev Perdue have held the post, one of the longest runs for Democratic governors in the country. As a result, McCrory is looking to the private sector for many of his top appointments and tapping current or former lawmakers for others.

Appointments like former Durham City Council Member Thomas Stith as chief of staff drew nods from across the political spectrum.

Perhaps more surprising, McCrory appointed Susan Kluttz to be his secretary of Cultural Resources. She is a former Salisbury mayor and registered Democrat who took political heat for declaring a "LGBT Pride Day" in the city, hardly a move designed to appeal to the Republican base.

"It's shocking, I think, that a governor who claims he is trying to reach across the aisle would make such an appointment," said Chris Fitzsimon, a writer for the liberal N.C. Policy Watch. The state Democratic Party also piled on the criticism, saying Pope's appointment was a sign that McCrory had given in to "right wing" elements in the GOP.

McCrory waved aside the criticism, saying he didn't know of any specific criticism that would disqualify Pope.

"I got the best qualified person for the job," McCrory said, pointing to Pope's experience in the legislature and former Republican administrations as well as running his family business, Variety Wholesalers. "You just in general say 'political.' I think we're fortunate to have him among others on my team."

Voters will now have four years to judge his work and the work of that team.

McCrory's swearing in is just the first of a week of public events that culminates Jan. 12 with the inauguration and parade in downtown Raleigh. The General Assembly returns to work on Jan. 9.