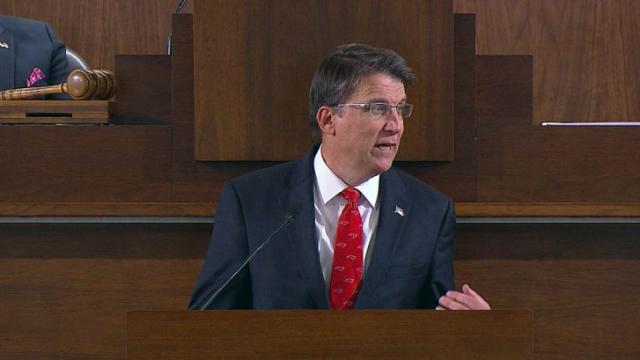 Raleigh, N.C. — Gov. Pat McCrory told a Charlotte radio host Monday that he opposes a bill that would allow magistrates to opt out of performing weddings and didn't see the need for a broader religious freedom bill.

"What is the problem they're trying to solve?" McCrory asked during Monday's broadcast of WFAE's Charlotte Talks program.

Large parts of the program focused on situations where McCrory had differences with conservative Republicans at the state legislature, particularly in the state Senate.

Senators have already passed a bill that would allow magistrates opt out of performing weddings if they have a "sincere religious objection" to performing particular ceremonies. The measure, which is now making its way through the House, is seen as a way to shield magistrates who do not want to perform same-sex marriages.

"At this time, I would not sign it the way it's written because ... I don't think you should have an exemption or a carve-out when you swore an oath to the constitution of North Carolina or to the Constitution of the United States of America," McCrory said.

During the same discussion, McCrory said he didn't see the need for a broader religious freedom bill that would protect a number of businesses and state officials from liability should they refuse service based on their personal religious beliefs. The topic of the "Religious Freedom Restoration Act" was at the center of national media attention this weekend, as leaders of large companies said they did not want to do businesses in states that pass such legislation.

In an op-ed for the Washington Post, for example, Apple Chief Executive Tim Cook said such laws "rationalize injustice by pretending to defend something many of us hold dear. They go against the very principles our nation was founded on, and they have the potential to undo decades of progress toward greater equality."