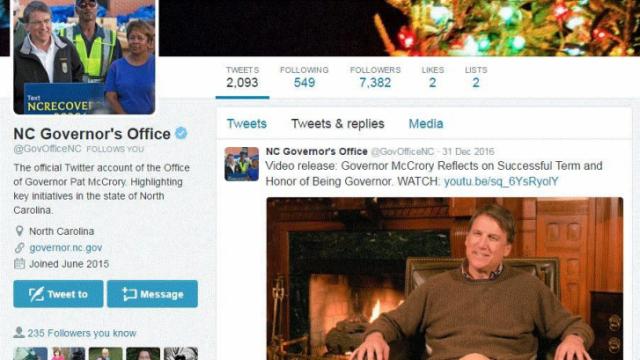 Raleigh, N.C. — When former Gov. Pat McCrory turned over the keys to North Carolina's Executive Mansion to Gov. Roy Cooper on Jan. 1, his staff didn't include the keys to the social media accounts used by the Governor's Office.

"My understanding is there were conversations with the transition team about turning them over," said Ford Porter, a spokesman for the Cooper administration. "Ultimately, they did not."

Cooper took over from McCrory on New Year's Day after an acrimonious and contested campaign. Instead of assuming control of social media assets created by state employees using state-owned equipment, the Cooper administration created new accounts from scratch.

"In some instances, it was simply easier to create a new account," Porter said.

He declined to elaborate on why the transition didn't happen, but he did say that it was his understanding those government-maintained accounts were government property.

Social media management is a small matter in terms of getting a handle on running a state that spends around $50 billion in state and federal tax dollars every year. But Twitter and other social media platforms have become a primary mode for some politicians to communicate with constituents. President Donald Trump has been an avid Twitter user, and the spokeswoman for state Senate President Pro Tem Phil Berger twice this week pointed to statements made on the lawmaker's Facebook page as a way of delivering official reaction to current events.

McCrory used his accounts to distribute weather warnings and information about disaster recovery efforts as well as pictures from official photo ops and holiday greetings.

Porter said he wasn't worried that North Carolinians might confuse the old official social media platforms for the new ones or that some former McCrory administration staffer could use the accounts to cause mischief.

However, the Cooper administration has asked the companies that run the platforms to grant the state access to make sure the social media pages will be archived, per state law. 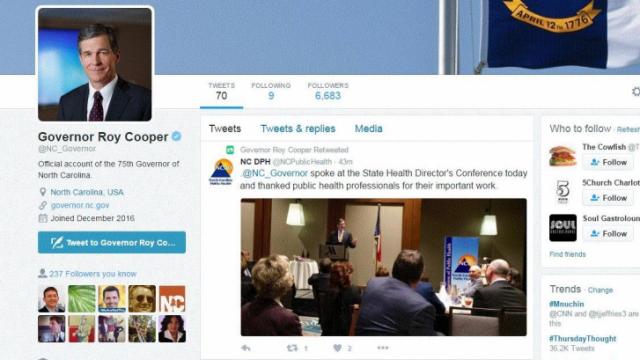 The social media platforms curated by the old administration weren't terribly robust in terms of how many followers they had. That's in part because, in 2015, McCrory's team transferred control of pages created by his office – and most of McCrory's social media followers along with them – to the Republican's campaign.

Still, the disconnect in the handover is striking given the amount of planning that went into handing over presidential social media assets by the Obama administration.

"It kind of sounds like neither side really thought about it," said Joseph Cabosky, a UNC School of Media and Journalism professor whose work focuses on politics and entertainment. While the state didn't loose a lot of ground, he said, it still costs time and money to rebuild those channels.

"They dropped a lot of equity value in a series of communications tools," he said.

The North Carolina State Archives has a program to archive important social media accounts, according to Sarah Koonts, director of the Division of Archives and Records.

"We work with agencies to identify those accounts that rise to the level of permanent retention. Our social medial archiving program is one of the longest running and most comprehensive ones of any state archives in the country," Koonts said.

However, the agency doesn't have policies that govern the transition of social media assets between elected officials.

"Any policies regarding internal management of agency passwords, etc., would be the responsibility of the agency," she said.