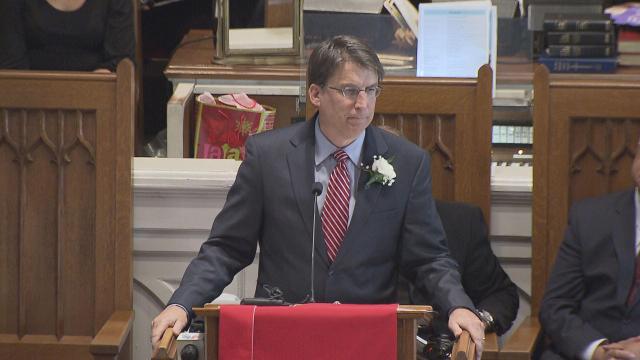 Raleigh, N.C. — Gov. Pat McCrory says he is worried that a bill the Senate approved Tuesday afternoon could hurt the state's efforts to get a handle on Medicaid spending.

The Senate voted 32-17 on final passage for

Senate Bill 4
, which now goes to the House.

The bill blocks an expansion of Medicaid next year to cover more adults under the federal Affordable Care Act. It also prohibits North Carolina from participating in the development of online health insurance exchanges, which would give people who don't have employer-sponsored health coverage a way to shop around for their own insurance.

Fred Steen, McCrory's legislative liaison, asked lawmakers to hold off on the bill, but senators said it's important to ensure North Carolina doesn't get put on the hook for an expansion that it can't afford.

"Always in Raleigh, we talk about slowing things down when we don’t want them to happen," said Sen. Tom Apodaca, R-Henderson.

The North Carolina Institute of Medicine says expanding Medicaid would cover 500,000 uninsured North Carolinians, and other studies show it would create 23,000 jobs and add more than $1 billion to the state's economy.

Senate Democrats said North Carolina pays into the federal Medicaid fund and should get its fair share back.

Sen. Josh Stein, D-Wake, said the state has one of the highest rates of uninsured people in the country, with nearly 20 percent of residents having no health care coverage.

"If we actually help folks get coverage, we will save lives and improve quality of lives. That has unbelievable benefits to the economy in and of itself," Stein said.

Apodaca countered by saying there's no such thing as free money, especially when the government is involved.

"It's still taxpayer dollars," he said. "With the feds, you never know what they're going to do to you the next day ... so it's best we look after ourselves on the front end."

"“You cannot operate a hospital when more than 50 percent of your patients would be paid for under the Medicaid system,” Hise said.

""Is it better to have somebody who has Medicaid or no insurance at all?" Stein responded.

McCrory said the bill could impact the ability of the state to find funding to revamp the information technology system that monitors Medicaid payments.

North Carolina has a new software program, called NC FAST, that will manage government benefits like Medicaid. The federal government has granted the state more than $40 million to help pay for NC FAST, but the Senate bill would refuse that money, leaving state taxpayers to cover some or all of the cost.

"We're trying to communicate that to the appropriate members of each body, who are just learning more about some of the details," McCrory said. "We're optimistic that we can hopefully work out a deal with the House to deal with some of our concerns about the cost to the North Carolina taxpayers and to make sure we can continue to operate the existing Medicaid program."

The Republican governor is working with a Republican-led General Assembly but is finding out that a shared party doesn't always mean a shared viewpoint.

“I remain consistent in my opposition to both an expansion of Medicaid and the establishment of a state-based health exchange in North Carolina," Tillis said in a statement. "I understand Gov. McCrory’s concerns over funding for information-technology projects within the Department of Health and Human Services. We will work closely with the Governor’s Office to address his concerns in ways that are in the best interest of North Carolina taxpayers."