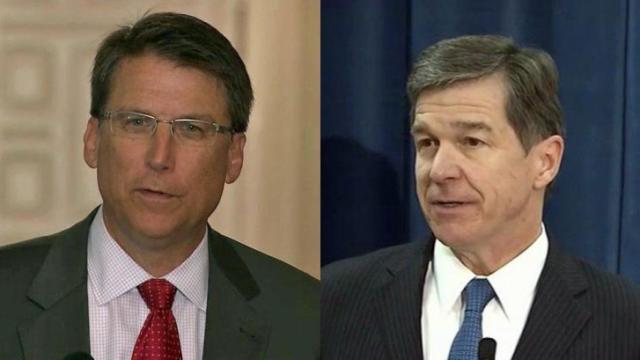 Raleigh, N.C. — Gov. Pat McCrory and Attorney General Roy Cooper are facing off in one of the most closely watched gubernatorial elections in the country this year.

McCrory, a Republican and former Charlotte mayor, is wrapping up his first term in statewide office. Cooper, a Democrat and former state lawmaker, has been elected four times as the state's attorney general.

In the early stages of the campaign, McCrory has positioned himself as a pro-business governor who has presided over economic recovery from the recession thanks to tax cuts and conservative management of state finances. Cooper has started his campaign with a vocal call to invest more in education, saying that McCrory and his fellow Republicans have given tax cuts to the wealthy at the expense of teachers.

The two men are sharply divided on House Bill 2, the controversial bill passed in reaction to Charlotte's transgender nondiscrimination ordinance. McCrory signed and has vocally backed what he describes as a "common sense" law that requires individuals to use the bathroom corresponding to the gender on their birth certificates. Cooper has called the law a "national disgrace" and has pointed to lost convention business, corporate objections and entertainment figures such as Bruce Springsteen refusing to perform in North Carolina as evidence the law should be repealed.

A third candidate, Libertarian Lon Cecil, will also on be on the ballot. However, Cecil has yet to show fundraising or polling numbers that indicate he will significantly impact the race.

For voters trying to make their decision, here's some more information about the two leading candidates. (For those using the WRAL App, the interactive features in this post are best viewed in your browser.)

Meanwhile, here's what the polls have to say: