Top Republicans skeptical court challenges will change election, even as many defend Trump 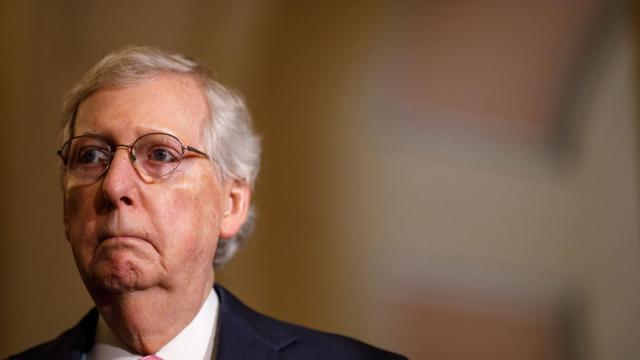 CNN — Despite their public rhetoric backing President Donald Trump's fight against the election results, top Republicans recognize there is little chance the outcome can be changed -- and hope that the court fights will be resolved quickly.

Several senior Republicans told CNN Monday evening that Trump is within his rights to make his case court. But senators all were either doubtful about Trump's chances of overturning tens of thousands of votes in several key states -- or wouldn't say if they agreed with the President that there was mass voting fraud.

"He's got every right to go through the process," said Sen. John Cornyn, a Texas Republican and member of GOP leadership. "Right now it looks like an uphill climb for him to be sure....This could be over pretty quickly."

Asked whether Trump should concede if his lawsuits fall short, Cornyn said: "Unless he's got some evidence that would change the numbers. The numbers are pretty compelling. But I don't think we're there yet."

"I personally haven't seen any," said Iowa Sen. Chuck Grassley, the most senior Senate Republican, when asked about widespread voting fraud that could change the election. "But that doesn't mean there hasn't been some. I would have no way to go beyond what I know and I just know that I haven't seen any. But there could be fraud."

The message was consistent among a number of Republicans, who don't want to break with the leader of their party who won more than 71 million votes. But they also see the reality that Democrat Joe Biden is on his way to the White House.

Even so, top Senate Republican leaders have continued to defend Trump, who has so far refused to concede, and has made baseless claims of voter fraud and a rigged election, despite the fact that there has been no credible evidence of widespread voter fraud in this year's contest.

Senate Majority Leader Mitch McConnell on Monday sided with Trump, saying he is "100% within his rights to look into allegations of irregularities and weigh his legal options."

Senate Majority Whip John Thune, the No. 2 Senate Republican, had a similar message on Monday, saying of the President, "I think he's got a constitutional right if there are legal challenges they want to make, and I think everyone ought to let that play out," when asked if he thinks Trump should concede the election.

CNN and other major news networks have projected Joe Biden as the winner of the 2020 presidential election, but top congressional Republicans still have not acknowledged Biden's victory.

So far, only a handful of Senate Republicans have done so, including Sen. Susan Collins of Maine, who in a statement on Monday said, "Congratulations to President-elect Biden on his apparent victory."

Many Republicans have instead chosen to echo the President.

"We are going to scrutinize the system," Senate Judiciary Chairman Lindsey Graham said of mail-in voting. "We're going to accept the results of court decisions and vote totals. But we're not stopping."

When asked if Trump would accept a loss in the courts, Graham only said: "I will."

"Six people voted who were dead," Graham said when asked if he had proof of voter fraud. "That's not going to change the outcome of the election. But if you had six people register after they died and voted -- yeah, that's fraud."

For Trump to win, Graham acknowledged: "You'd have to disqualify a lot of ballots."

Graham also said he spoke with McConnell to set up a joint committee to investigate mail-in voting. "We need to put this new way of voting under a lot of scrutiny. .. [McConnell] said it's something to think about -- but he's more worried about keeping the Senate."

The President's uphill legal fight has put Republicans in awkward spot, especially as some in their party -- like former President George W. Bush -- have begun to refer to Biden as "President-elect."

"I think I've said all I'm going to say about that," said Sen. Roy Blunt, a Missouri Republican and member of GOP leadership, when asked if Biden should be called "President-elect."

Asked if he'd consider Biden the "President-elect," Sen. John Barrasso -- the No. 3 Republican -- walked onto an elevator and ignored the question.

McConnell, at a photo opportunity with new GOP senators on Monday, declined to answer questions from CNN about the presidential election and whether he's seen any evidence of fraud that could overturn the election.