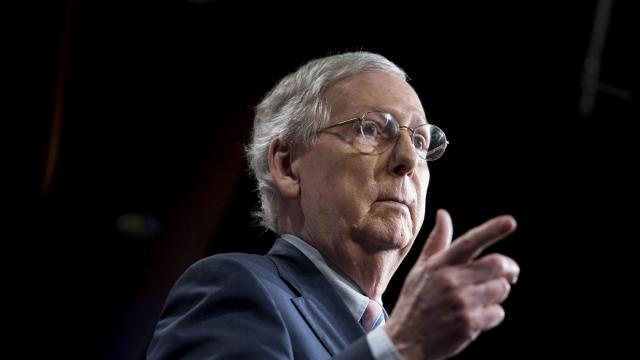 WASHINGTON — In the past three years, Sen. Chuck Grassley, R-Iowa, chairman of the Judiciary Committee, blocked a Democratic Supreme Court nominee for more than a year, pushed through an army of conservative judges and helped cement a conservative Supreme Court by securing confirmation of the most controversial high court nominee in a generation.

All of that has come at great personal cost, so the 85-year-old Iowan had some chits to call in when Monday morning he joined a private phone call with Sen. Mitch McConnell, R-Ky., the majority leader, to discuss a bipartisan breakthrough to overhaul the criminal justice system and the nation’s sentencing rules.

I have been there for you, Grassley told McConnell, the man standing in the way of a quick vote on the measure. And I would hope this is something that you would help me make happen, according to three people familiar with the call who were not authorized to publicly discuss the conversation.

The direct lobbying by Grassley was just part of a pressure campaign aimed squarely at McConnell this week as an unusual coalition of senators, conservative advocacy groups and White House officials press to change the nation’s sentencing and prison laws. With President Donald Trump supportive of the effort and Speaker Paul Ryan, R-Wis., pledging to move it through the House, they increasingly view the Senate majority leader as the lone obstacle to unwinding some of the federal tough-on-crime policies of the 1980s and 1990s.

Now top White House officials, Trump family members, Republican senators and allies of billionaire activists Charles and David Koch are working to get Dr. No to a yes.

“I’ve been working on this issue for nearly eight years, and we have never been closer than we are right now,” said Sen. Mike Lee, R-Utah, who joined Grassley on the Monday call. “The stars have just aligned in such a way, all it takes is getting to the Senate floor.”

Proponents of the bill, known as the First Step Act, fear that McConnell will let the short window for consideration this year slide shut rather than bring up for a vote a complicated issue that divides Republicans. His allies insist that those fears are misplaced and that McConnell will make a decision based on factors he has already stated publicly: How much Republican support the bill secures and how it fits in with other must-pass legislation.

So Republican senators allied with Grassley, including Lee, Lindsey Graham of South Carolina and Tim Scott of South Carolina, began working over wavering colleagues by phone. Jared Kushner, the president’s son-in-law and a leading advocate of the legislation, convened a call with business groups to praise the changes, and the White House circulated a USA Today op-ed that Kushner wrote with Tomas J. Philipson, a member of the White House Council of Economic Advisers. Donald Trump Jr. and Ivanka Trump, the president’s eldest son and daughter, blasted supportive messages to their millions of Twitter followers urging Congress to move quickly.

Kushner plans to ask Trump to lobby McConnell directly by phone, but is waiting to line up more Republican support first, according to two people familiar with his thinking.

Outside advocacy groups have largely focused on Kentucky, where McConnell is up for re-election in two years. Justice Action Network, which supports the overhaul, is digitally targeting conservative voters in the state. So is FreedomWorks, a Tea Party-aligned conservative group, whose online targeting had driven 10,000 calls of support to McConnell’s office in the last few days. “We are going to keep up the pressure on him to make sure he is good on his word,” said Jason Pye, vice president of legislative affairs for FreedomWorks.

The state’s junior Republican senator, Rand Paul, and his wife, Kelley, were saturating the Kentucky airwaves to make the case directly to McConnell’s constituents.

“I would just ask Mitch McConnell to look at the people who are coming at this from all walks of life and hear all of our voices saying we want this legislation,” Kelley Paul said in an interview.

But McConnell is also getting pressure from Sen. Tom Cotton, R-Ark., the leader of a small but powerful bloc of conservatives deeply opposed to any sentencing changes or early release provisions that could free jailed criminals. Cotton has argued that senators should slow down the process and hold hearings on the bill, which he said amounts to a jailbreak — a traditional watchword in Republican politics.

Cotton has channeled the support of influential law enforcement groups, including the National Association of Assistant United States Attorneys, which sent another letter to McConnell and the Democratic leader Monday warning that the First Step Act would “subject the public to more crime, not less.”

Other law enforcement groups support the bill. The appeals on both sides grew in urgency over the weekend after a New York Times report that McConnell had privately told Trump he did not foresee enough time to bring the bill up for a vote this year, which many viewed as tantamount to killing the measure just as it was gaining momentum.

Senate Democrats and liberal advocacy groups that back the changes are largely watching from the sidelines. With the support of Sen. Dick Durbin of Illinois, the No. 2 Democrat in the chamber, and Sen. Cory Booker of New Jersey, a leading liberal voice on the issue, Democrats believe all but one or two of their members would vote yes, but they are holding back public endorsement to avoid scaring off Republicans.

As intensity on both sides has increased, interparty tensions unusual in the modern Senate have spilled into public. After sparring at a private Republican luncheon last week, Cotton and Lee traded public shots on Twitter on Monday, accusing each other of misrepresenting the facts.

The compromise First Step Act builds on a prison overhaul bill passed by the House this year, adding four changes to federal sentencing laws. It lumps together new funding for anti-recidivism programs meant to prepare prisoners to re-enter society and the expansion of early release credits for inmates. It also reduces some mandatory minimum sentences for nonviolent drug offenders, among other changes.

Though its effect would be limited to federal prisons and offenses — not state ones — the legislation could affect tens of thousands of current inmates and future offenders, experts believe.

For his part, McConnell told the senators on the Monday morning call that he was not trying to kill their legislation. Instead, he laid out the Senate’s remaining agenda for the year — including a major farm bill, must-pass government funding and more judicial nominees — and reiterated that he did not believe he could make enough floor time for the bill to get a vote before mid-December, when Congress is scheduled to end its work for the term, according to the people familiar with the call. Allies of McConnell said he was not opposed the legislation, but was wary of bringing up a bill that could divide his caucus, particularly with other pressing priorities in the wings. He made no firm commitments to the senators, but said he would look closely at the results of a formal whip count taken next week.

At one point during the call, McConnell asked why, if they had bipartisan support, the senators should not just wait until next year to try again.

Lee told the leader that he considered such a delay a death knell because Democrats favoring more expansive sentencing changes would take control of the House and push the bill to the left.

“It is dangerous to say we will get it done in the next Congress,” Lee said later in an interview. “I really have serious doubts about that.”